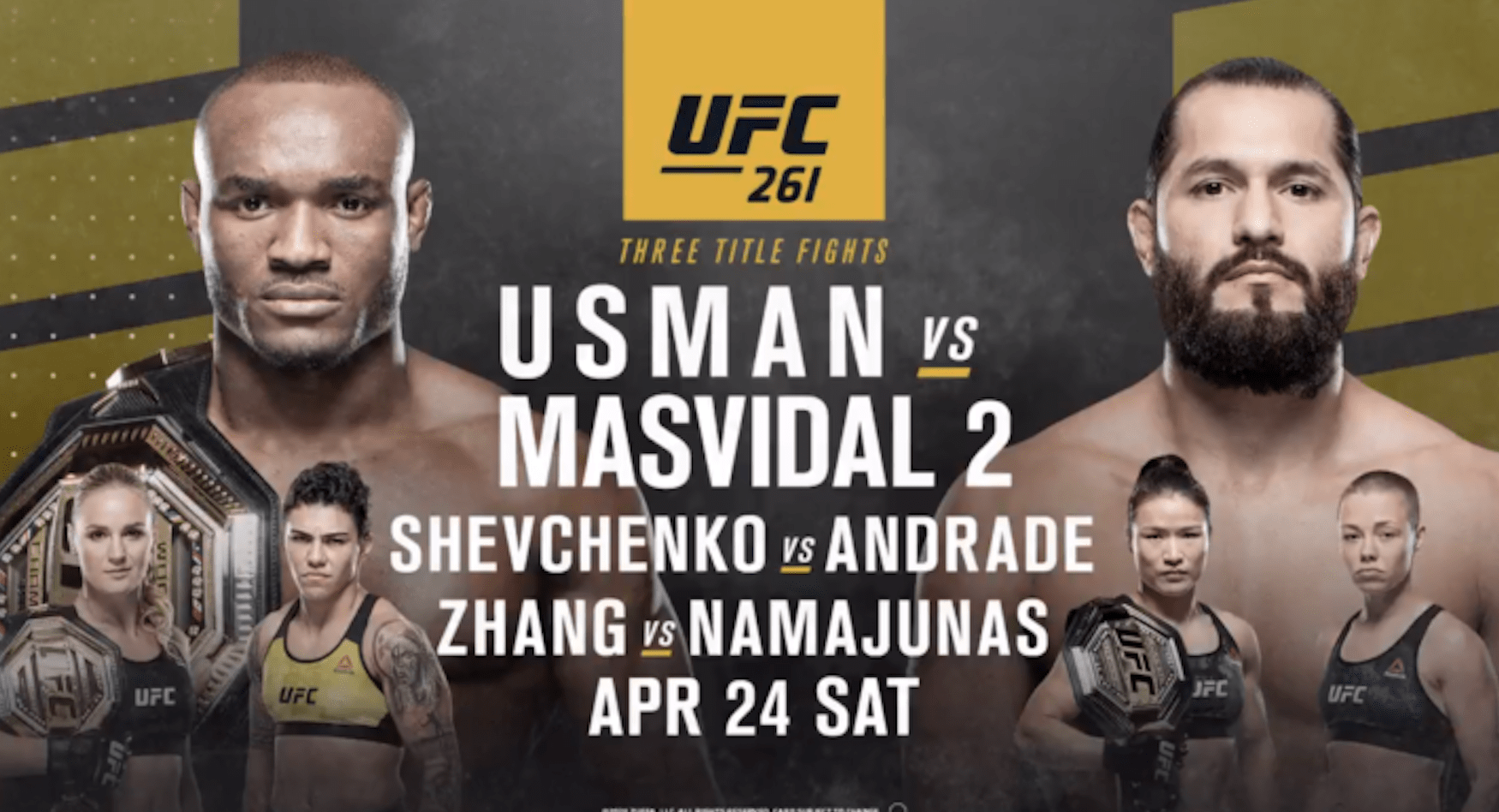 UFC 261 goes down on April 24th at the VyStar Veterans Memorial Arena in Jacksonville, Florida. The card is stacked with three title fights. Jorge Masvidal will challenge Kamaru Usman for the welterweight title in the main event. Zhang Weili will defend her strawweight belt against the former champion, Rose Namajunas. And former strawweight champion Jessica Andrade will challenge the flyweight champion, Valentina Shevchenko.

The promotion’s fifth pay-per-view of 2021 will see fans back in attendance for the first time since UFC 248 a little over a year ago. Excluding the three events which took place on Fight Island in Abu Dhabi in January. It was reported that all 15,000 tickets sold out in minutes.

Usman successfully defended his title against Masvidal last July at UFC 251, after the American Top Team representative stepped in on one weeks’ notice to replace Gilbert Burns who tested positive for COVID. ‘Gamebred’ hasn’t competed since then, while ‘The Nigerian Nightmare’ has since made his third title defence, beating his former training parter ‘Durinho’ at UFC 258.

Zhang hasn’t fought since UFC 248, where she made her first title defence against Joanna Jedrzejczyk in the ‘Fight of the Year’, winning via split decision. Namajunas last fought at UFC 251, where she avenged her loss to Andrade with a split decision win.

Shevchenko is coming off her fourth successful title defence against Jennifer Maia last November at UFC 255. While Andrade earned her title shot by finishing Katlyn Chookagian in the first round at UFC Fight Island 6 in her flyweight debut.

As we get closer to fight night, we will add the best UFC 261 pre-fight videos to this page. Including the official promos, the face offs, the weigh-ins, and the Embedded Series.

Who do you think leaves UFC 261 with the belts, Kamaru Usman or Jorge Masvidal, Zhang Weili or Rose Namajunas, Valentina Shevchenko or Jessica Andrade?