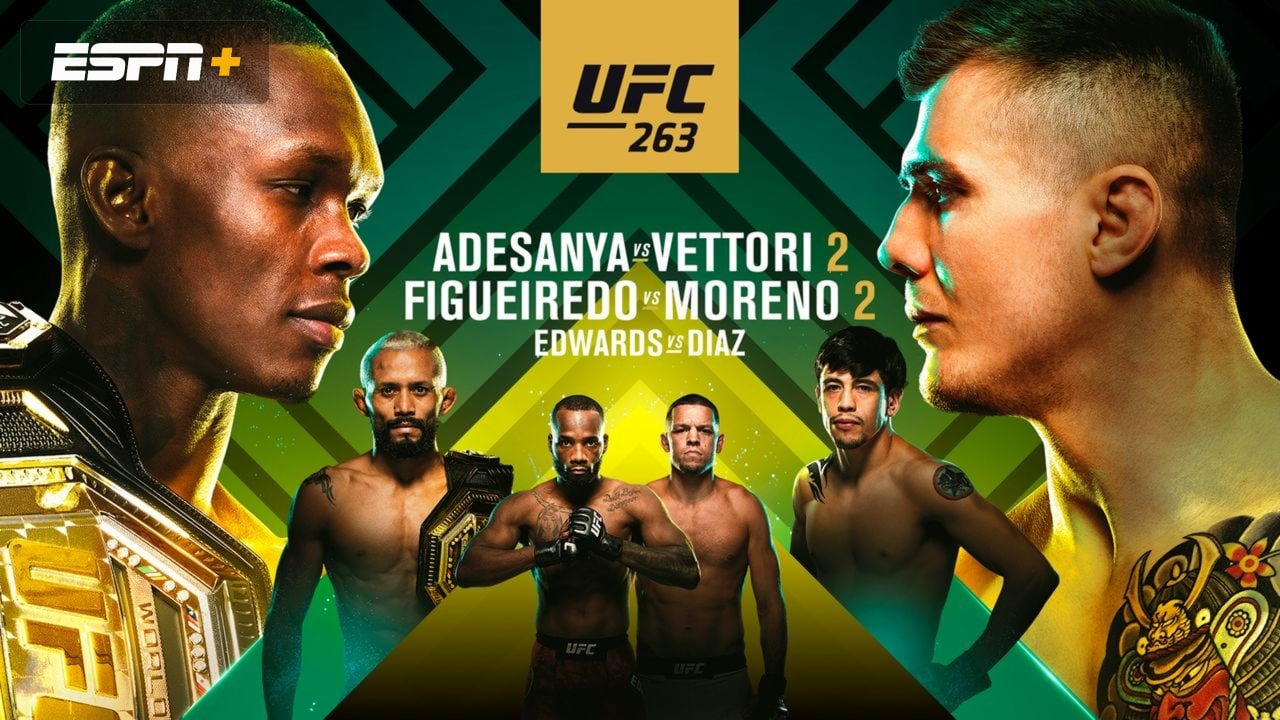 UFC 263 goes down Saturday night at the Gila River Arena in Glendale, Arizona, and features two title fights. In the main event, Israel Adesanya defends his middleweight title against Marvin Vettori. And in the evening’s co-main event, Brandon Moreno challenges Deiveson Figueiredo for the flyweight title. Both title fights are highly anticipated rematches.

Adesanya beat Vettori via split decision when they first met in the very same arena at UFC Glendale three years ago. Since then, ‘The Last Stylebender’ has gone on to win the title, where he remains unbeaten at middleweight. He is coming off a loss however, when challenging Jan Blachowicz for the light heavyweight title earlier this year at UFC 259. Vettori has gone 5-0 since their first fight, and is coming off a one-sided unanimous decision win over Kevin Holland at UFC Vegas 23.

Figueiredo and Moreno fought out a majority draw six months ago at UFC 256 in one of the fights of 2020. As a result of the draw, the Brazilian successfully held on to his belt. He would have won the fight if not for having a point deduction as a result of an illegal shot to the Mexican’s groin.

UFC 263 also sees the return of Nate Diaz, who takes on the number three ranked Leon Edwards in what will be the first ever five round non-main event, non-title fight in the promotion’s history. The Stockton native hasn’t fought since losing to Jorge Masvidal at UFC 244. Edwards is undefeated in his last nine fights, but is coming off a no-contest against Belal Muhammad at UFC Vegas 21 due to an accidental eye poke.

We will continue to add more videos in the hours and days that follow the main event.

This Is How The MMA World Reacted To UFC 263:

The UFC returns next weekend with UFC Vegas 29, which will feature a top ten featherweight clash between ‘The Korean Zombie’ and Dan Ige in the main event.