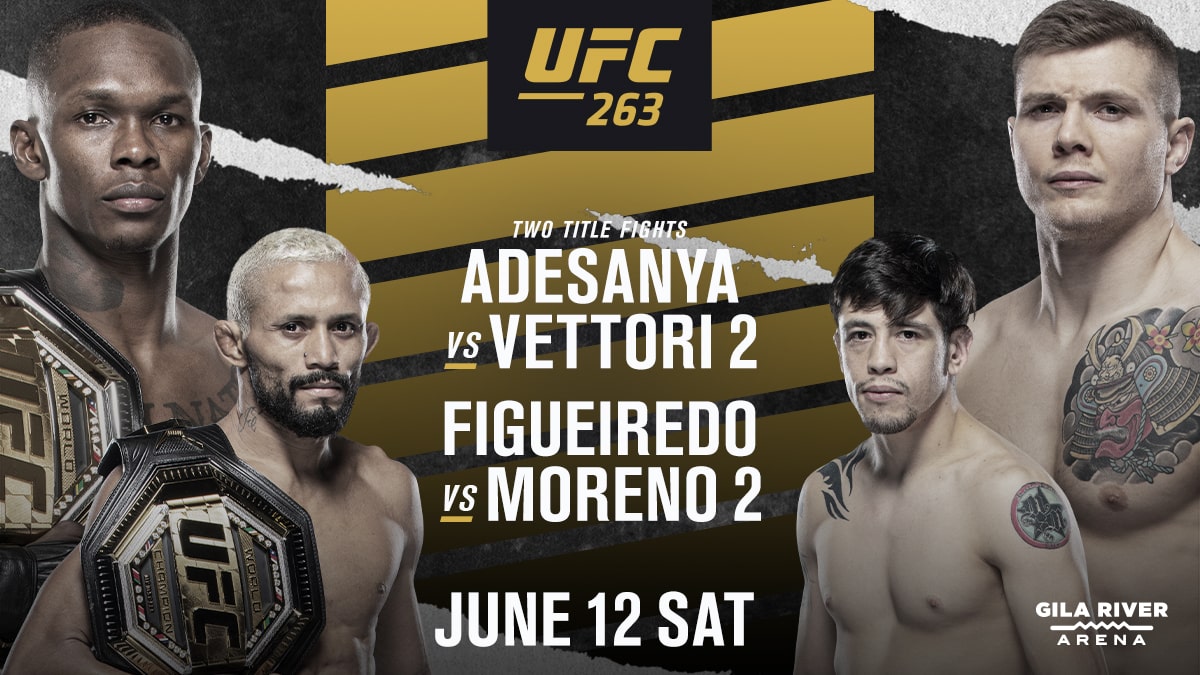 UFC 263 goes down on June 12th at the Gila River Arena in Glendale, Arizona. The promotion’s third straight pay-per-view with the return of fans will feature two title fights. Israel Adesanya defends his middleweight title against Marvin Vettori in a rematch in the main event, and Deiveson Figueiredo runs it back with Brandon Moreno in the co-main event, with the flyweight title on the line.

Adesanya beat Vettori via split decision when they first met three years ago at UFC Glendale. Since then, the Nigerian born Kiwi amassed seven straight wins in the UFC middleweight division, capturing the title along the way. In his last outing to the Octagon at UFC 259 however, his unbeaten record came to an end when he lost a unanimous decision to Jan Blachowicz whilst challenging for the light heavyweight title.

Since losing to Adesanya, Vettori has won five in a row. Most recently scoring a one-sided unanimous decision win over Kevin Holland, who replaced Darren Till in the UFC Vegas 23 main event after the Brit broke his collarbone less than two weeks out from the fight.

In the UFC 263 co-main event, Moreno gets an immediate rematch against the flyweight champion Figueiredo after their first fight at UFC 256 ended in a majority draw. As a result, the Brazilian kept the belt. Although no winner was crowned on the night, the 25 minute war was one of the fights of 2020.

Elsewhere on the card, Nate Diaz returns against the number three ranked welterweight, Leon Edwards. The two were scheduled to face off in the UFC 262 co-main event, but the Stockton Native was forced out of the fight with an undisclosed injury.

As we get closer to fight night, we will add the best UFC 263 pre-fight videos to this page. Including the official promos, the face offs, the weigh-ins, and the Embedded Series.

And we will kick things off with the first official promo.

Who do you think leaves UFC 263 with the belts, Israel Adesanya or Marvin Vettori, and Deiveson Figueiredo or Brandon Moreno?