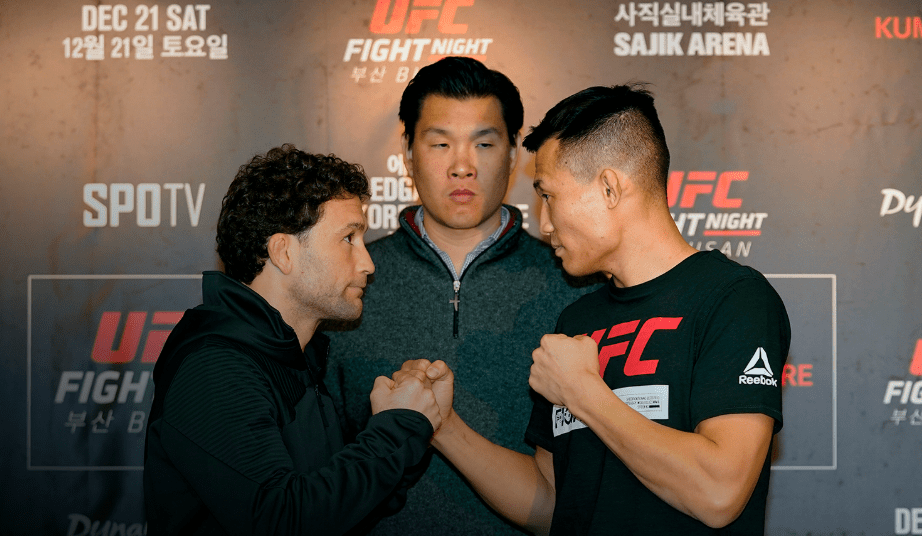 UFC Busan goes down on Saturday night at the Sajik Arena in Busan, South Korea. In the main event, home favourite ‘The Korean Zombie’ (Chan Sung Jung), will take on Frankie Edgar. The two were previously scheduled to meet a year ago at UFC Denver but Edgar was forced to pull out due to an injury.

Brian Ortega was originally scheduled to fight ‘The Korean Zombie’ in the UFC Busan main event but he was forced to pull out, after suffering a partial ACL tear just weeks ahead of the fight.

The UFC’s first return to South Korea in four years will see Volkan Oezdemir and Aleksandar battle it out in an exciting light heavyweight contest, in the co-main event. ‘The Korean Superboy’ (Choi Doo-ho) also stars at UFC Busan. He is set to take on Charles Jourdain in a featherweight clash.

We have been in South Korea all week for UFC Busan fight week. Below you can find all our coverage from the week. Including the full Open Workouts, the weigh-ins video and the media scrums of Frankie Edgar, ‘The Korean Zombie’, Volkan Oezdemir, Aleksandar Rakic, ‘The Korean Superboy’, Charles Jourdain and the guest fighter of the week, Alistair Overeem. As well as the full weigh-in results.

We’ve also now added the Ceremonial Weigh-ins and a fans Q&A with Alistair Overeem below!

As well as an exclusive interview with ‘Captain America’ Eric Albaraccin, who coaches ‘The Korean Zombie’, Henry Cejudo and Paulo Costa. It was his first interview since Cejudo announced he was relinquishing his UFC flyweight title.


You can check out our UFC Busan Media Day Face Off photos here.