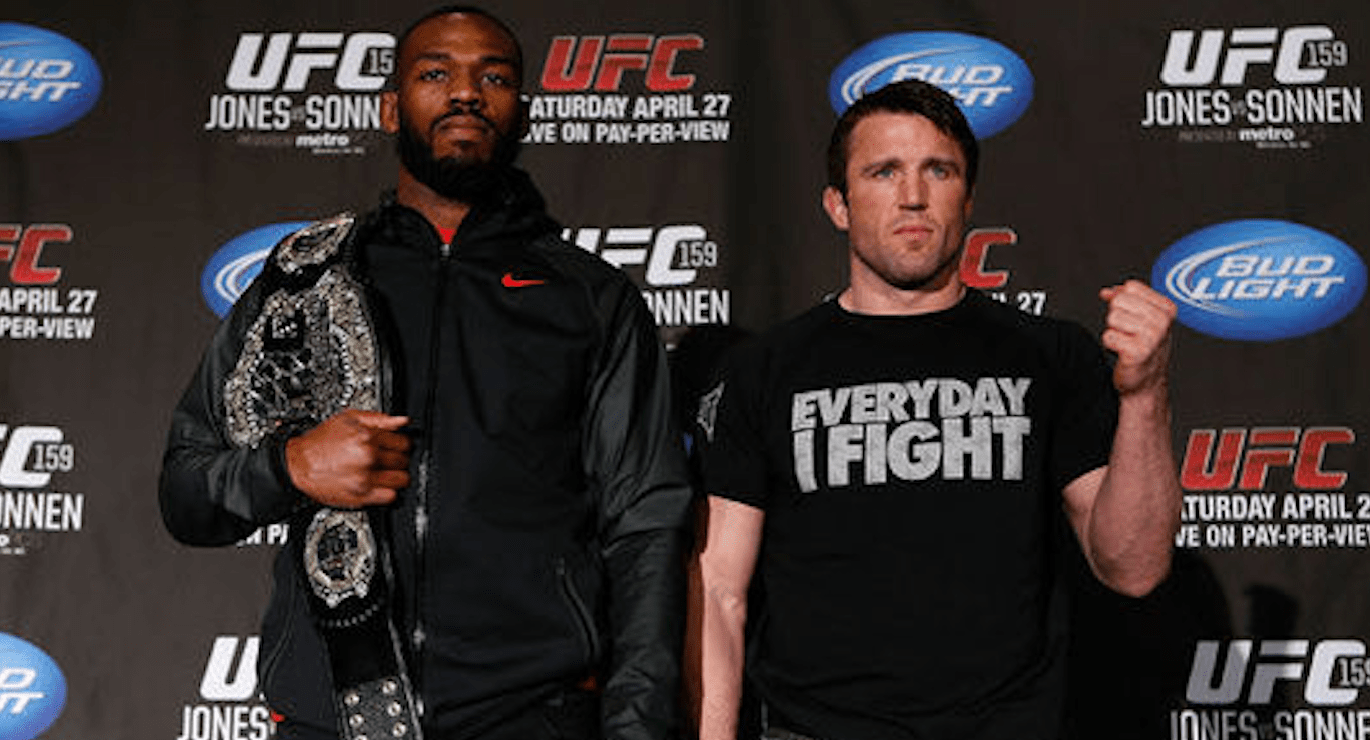 Chael Sonnen and Jon Jones engaged in a Twitter battle earlier this week, after the former UFC middleweight title challenger ‘trolled’ ‘Bones’ for a tweet about ‘giving birth to something big’.

Jones fired back with crude barbs in a series of tweets, which have now been deleted, but Sonnen was expecting nothing less.

In fact, Jones exceeded expectations with the way he reacted to Sonnen’s tweets, ‘The American Gangster’ said on his YouTube channel (as transcribed by MMA Fighting).

“Jon, I’m a troll,” Sonnen said. “This is what a troll does. A troll comes at you over the internet from several states away where he’s protected in the hope of getting an emotional reaction from you. And he gave it to me! So point, Chael. Couldn’t have succeeded any better but over-performed my own expectations I must tell you. Jon was very upset.”

Jones, who vacated his light heavyweight title last August to move up to heavyweight, hasn’t competed since beating Dominick Reyes fifteen months ago at UFC 247. At present however, he hasn’t shown willing to fight in his new weight division unless he gets a big payday.

The 33 year old recently tweeted that it could be another year before we see him fight again. His stubborn stance with the UFC has seen him criticised by large parts of the MMA community. Including Sonnen, who believes that now is the time for his one-time opponent to make his move in the heavyweight division.

“Fighting moves so quickly,” Sonnen said. “And Jon is one of the top guys, no question. In terms of a name as well, one of the top guys. A year ago you guys didn’t know what a Khamzat Chimaev was. You didn’t know what it was. Now, I offer you that because those same guys are in heavyweight they just haven’t been identified. In fact, there are six or seven or eight of those guys that just haven’t had that breakthrough moment yet. When six or seven or eight guys within a division do, no one is coming to Jon Jones.

“This iron is hot right now and he is on a real short list of the Stipe Miocics, of the Francis Ngannous, of the Derrick Lewises, and then of course you’ve got Jon Jones. They’ve got 25 more guys that were up at 5am this morning with those same dreams getting their miles in. It goes fast. You’ve got to win the fights you can win when you can win them, you’ve got to get the fights you can get when you can get them, and this is a piece of the reality that he has disassociated with.

“I can’t remember the last time Jon Jones fought. It was against Dominick Reyes but was that a year ago? Was it two years ago? I think you guys understand my point – I’ve watched every show there is. I’ve watched every fight that has been on TV. I haven’t missed one and I haven’t missed Jon a bit. To be real fair, I’d rather have Jon and Francis than not have it, I’d rather have Jon and Stipe than not have it, but it’s not gonna stop me at 7 o’clock on a Saturday night.”

According to Sonnen, Jones’ tweet about ‘giving birth to something big’ was merely a publicity stunt. For him however, it was an opportunity to poke fun at the Albuquerque native.

Earlier this week, Jones announced a new relationship with former Golden Boy CEO Richard Schaefer, who will be working as an advisor for his fighting career. Sonnen admitted that the 59 year old comes highly qualified, but doesn’t think there’s a lot he will be able to do.

“Jon has a contract… If you have an expert in the PPV business, great. You could probably do a lot of really good things with that guy but you’re under contract with somebody else which means you’re not gonna do those things with that guy. So what are you gonna do? … What could it possibly be that these two guys are going to do? Richard would be a great guy in an advisory role to bring you in and talk to prior to sitting down at the table and working out your negotiations for your contract, of which you already have.

What do you make of Chael Sonnen’s comments on Jon Jones’ business dealings with the UFC?