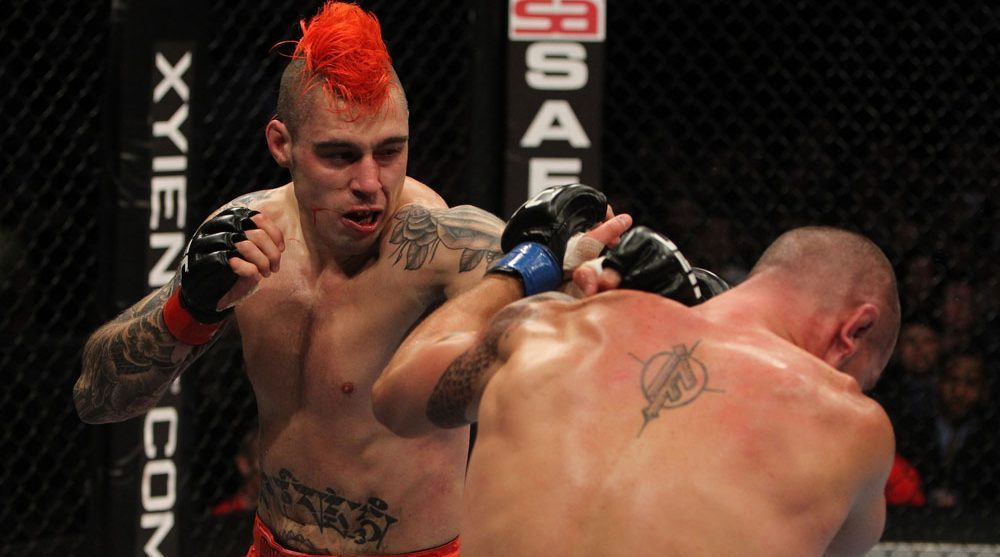 While Dan Hardy has not fought since 2012, there is very high interest among fight fans to see him return to the sport, even for a one-off final fight. ‘The Outlaw’ brings a technical striking game that is razor-sharp and largely built around a left-hook that is near picture-perfect. The 37 year old is also a warrior with no quit in him. When Georges St-Pierre sunk in a deep armbar in their 2010 title fight, Hardy refused to tap and showed the world he would prefer to lose an arm, rather than the fight.

It is exciting to report, then, that ‘The Outlaw’ has put forth a name and a tentative plan for a return. Speaking on BT Sport’s Open Mat earlier this week (transcript courtesy of BJPenn.com), Hardy named Anthony ‘Showtime’ Pettis (who just bested ‘Cowboy’ Cerrone at UFC 249) as a potential opponent for a comeback bout

“I think it’s a good scrap. I don’t think he won the fight [against ‘Cowboy’], I think ‘Cowboy’ took the first and second round. He did get poked in the eye in the third round and was unlucky on the decision,” Hardy explained. “I think ‘Cowboy’ looks better at welterweight. Pettis just doesn’t look as quick or agile as he used to in his career. I don’t even think it’s about the weight class anymore. Even if you move Pettis back down to 155, he’s not quite as sharp as he used to be.

“It’s a bit like Roy Jones when you’ve got a style that relies on reaction times and speed and that starts to drop off it becomes evident very quickly,” he elaborated. “I mean, the sun’s coming up here and I’m getting my running shoes on now and get on the road. But, I think I’d catch him clean and put him away, to be honest.”

Though analyst work has been the bane of some fighters who seem unable to balance the duties of training and broadcasting, Hardy appears as if he has benefitted immensely from his time studying the fight game. Even his comments about Pettis’ reaction times ring of the rigorous analytic Hardy brings to the table.

Long-time fans will recall that a diagnosed heart irregularity (Wolff-Parkinson-White syndrome) originally took Hardy from the sport. Now that he is cleared to compete once more, it appears it will not be long before the ‘Outlaw’ is back inside the Octagon.

Do you think Dan Hardy has work left to do in the cage? And how do you see a matchup with Anthony Pettis playing out?