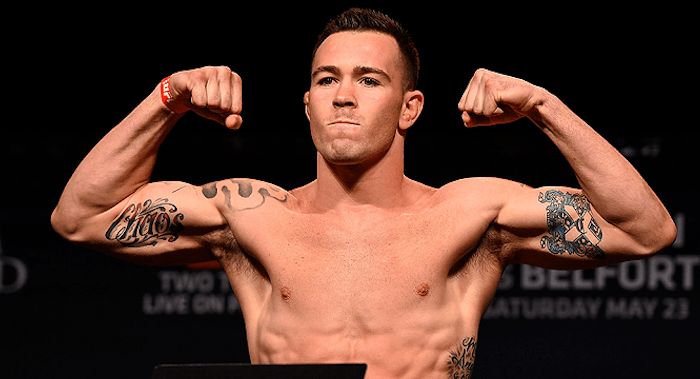 Former UFC interim welterweight champion Colby Covington received a double whammy last weekend, after absorbing a knockout loss to Kamaru Usman in the fifth round of their UFC 245 main event.

The loss also saw him end up in hospital following the fight, with a ‘non-displaced midline mandible fracture’. Despite suffering the injury in the third round, Covington toughed it out and kept moving forward until the point in the fight where referee Marc Goddard stopped it with just 50 seconds left in the fifth round.

Whilst most fans were gunning against Covington prior to UFC 245, his performance and heart won over many fans. Speaking to MMA Fighting, American Top Team owner Dan Lambert echoed the fans’ respect for Colby, by lauding his grit in the later stages of the title fight.

“He came back to Florida to go see an oral surgeon here to figure out what he wanted to do. I’m not real familiar with what the different statuses are with the jaw but I know one thing, he’s a tough motherf***er to fight with it for three rounds in that kind of stand-up war,” he added.

Aside from the tough jaw of Covington, Lambert also praised both gentleman for putting up an epic fight, that added relevance to both their respective names.

“It was a hell of a fight. Both those guys, I think both their stock went up after a fight like that, which is typically something you don’t say after a fight. Both guys proved they had balls of steel and cardio for days. I give credit to both of them.”

Lambert sided with his fighter about Colby’s claim of the premature ending of the match but thinks that Usman would still have won it, even without the intervention from the referee.

“Can something crazy happen? I guess it can. The week before one of our other guys [Jairzinho Rozenstruik] got a knockout on [Alistair] Overeem with four seconds left. So anything can happen. Yeah, I think it was a little early but I don’t think it affected the decision. I know he was upset about it. No one wants to get the opportunity taken away from them. He was also upset about the ‘low blow’ in the second round, I think that gave Usman a break, that didn’t really look low on the replay but s*** like that happens in a fight.”

Having a super colourful personality, Covington made himself a villain to the eyes of a lot of fans. Lambert however doesn’t want people to look past his recent showing.

“You can hate the guy, you can want to see him get merked but after putting on a performance like that and going to war the way he went to war and knowing he broke his jaw early in the fight, how can you not have respect for that?” Lambert stated.

Despite the setback, Covington remains optimistic about his fighting future and is already talking about getting back to work. According to Lambert.

“You never know how a fighter’s going to respond to something like that. When I first talked to him, I had my concerns cause you just never know. I could not have scripted his response any better than what I heard from him. He’s 1,000 percent positive, 1,000 percent motivated. He’s ready to go. He didn’t lose one piece of confidence in himself.”

Do you think Colby Covington will come back stronger, after his loss to Kamaru Usman at UFC 245?