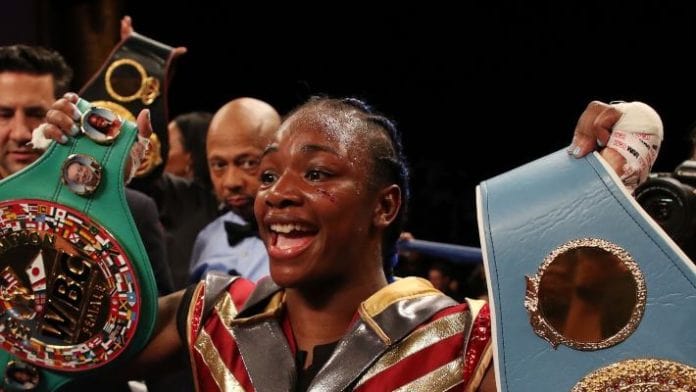 If you’ve been following us the last six months, you will know that Claressa Shields has been respectively looking for a fight with Amanda Nunes since back in July.

Shields first called out Nunes for a boxing contest back in July. Then in September, ‘T-Rex’ said that if ‘The Lioness’ would come over to boxing to fight her, she would return the favour by fighting her within MMA rules.

By the end of October however, Shields had decided that not only would she be prepared to fight Nunes inside the Octagon, but that she intended to switch entirely to MMA. Citing the reason that she wasn’t getting the respect she deserved in the boxing world.

On hearing this, UFC president Dana White said that he was ‘definitely interested’ in bringing the 24 year old over to the UFC. Now it looks like the interest has gone a step further. Speaking to BT Sport this week, the UFC boss stated that he was in talks with Shields’ team.

“I know they’re both interested in it, too. We’ll see how this whole thing plays out. We have a lot of respect for her, too, and she’s going to come to the fight and should be fun.”

A matchup between Shields and Nunes would be huge. Although the difference in weight could be a stumbling block. Claressa has pointed out on several occasions that 155lbs is as low as she could go. The UFC currently doesn’t have a women’s lightweight division and even its women’s featherweight division is light on numbers.

There will obviously be the skeptics of another fighter looking to make a crossover between MMA and boxing but as Shields stated earlier this year, she is only 24 years old. And what she has achieved at such a young age is pretty remarkable. After winning the two gold medals in the Olympics, she has gone on to win the WBA, WBC, IBF, WBO, and the Ring middleweight titles. Going 9-0 since turning professional, in the process.

Nunes, who is seven years the senior of Shields, has four losses to her name but hasn’t lost in over five years. In that period, the Brazilian has won nine straight fights, winning the UFC bantamweight and featherweight titles, beaten some of the best female MMA stars of all time, in Miesha Tate, Ronda Rousey and Cris Cyborg, and is now widely regarded as the women’s MMA GOAT.

Do you think we’ll see Claressa Shields vs Amanda Nunes in the UFC?