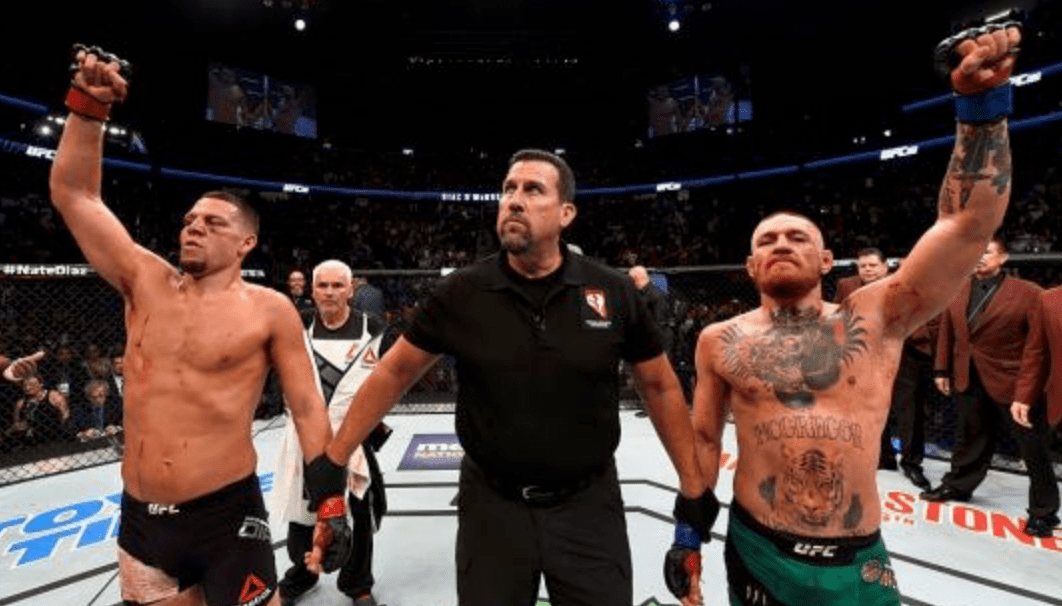 Daniel Cormier has named five fights he wants to see the UFC book at welterweight. The first fight he mentioned he would like to see is the trilogy bout between Conor McGregor and Nate Diaz.

“Here’s the problem: Nate Diaz won’t fight just anyone. It has to be someone with name,” Cormier said. “And honestly, most of the guys just don’t fit it. Like you put him in there with Leon [Edwards], who’s still trying to elevate his name? You need someone with a name to fight Nate Diaz. S***, Conor wants to fight? Let him and Nate do the trilogy. Why not just do the trilogy. Both of ’em are free. That could work. There you go, Nate.”

Diaz and McGregor have both been making headlines recently. The Stockton-native recently put out a video titled ‘Round 4‘, campaigning for a rematch with Jorge Masvidal. Meanwhile, the former two division UFC champion from Ireland has been pushing for fights with Manny Pacquiao, Diego Sanchez, and Dustin Poirier as of late.

Cormier then listed another four fights he wants to see happen in the welterweight division.

Usman is set to defend his welterweight title against Burns at UFC 256 in December. As for Cormier’s suggestion of Chimaev vs Thompson, it appears ‘Wonderboy’ has already turned down that fight. ESPN’s Ariel Helwani previously reported that it was because the former title challenger wants to face Edwards or Masvidal next.

The former UFC heavyweight and light heavyweight champion would go on to outline why he feels Thompson would make a good opponent for Chimaev.

“This is why I say ‘Wonderboy’: it’s because he’s fought for the title a few times already,” Cormier said. “And now at this point in his career, he’s kind of this guy who can still compete with the best of the best, but if you’re able to get past him you’re completely ready as a contender … He’s one of those guys now where he’s gotta build through beating some of these guys in order to put himself back into title contention.”

What do you think of Daniel Cormier’s five big fights to make in the UFC welterweight division?