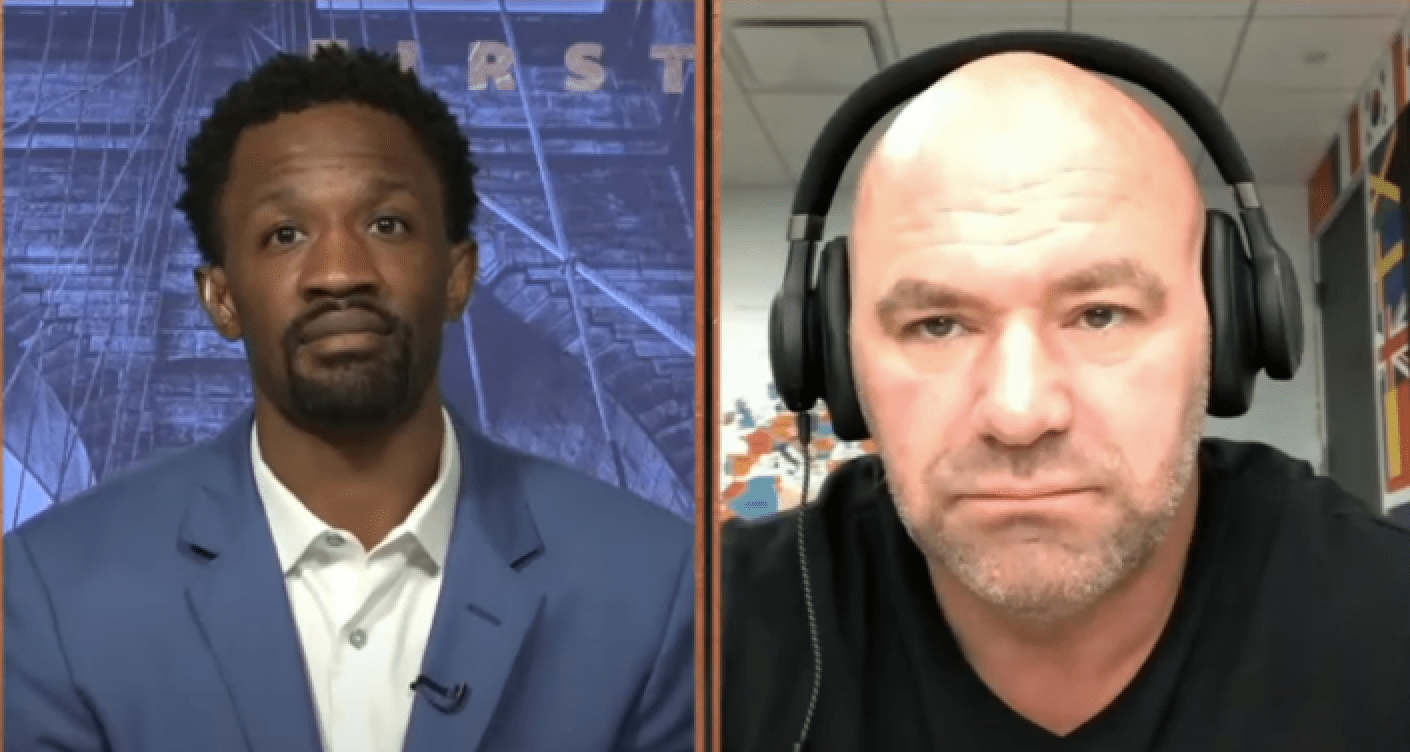 Dana White is showing no signs of backing down in his standoff with two of his biggest athletes over fighter pay. Over the past week, multiple fighters including Jon Jones and Jorge Masvidal have raised complaints about their negotiations with the promotion.

Jones went off at Dana after the UFC rejected his request for more money to fight Francis Ngannou at heavyweight. While Masvidal claims he was offered less to fight Kamaru Usman for the UFC welterweight title than he was to fight with Nate Diaz at UFC 244. ‘Gamebred’ also pointed to other professional sports for comparison on how little the UFC pays their fighters.

Speaking on ESPN’s First Take (as transcribed by MMA Fighting), Dana got into a back and forth with former NFL cornerback Domonique Foxworth over how much he pays his fighters.

“Jon Jones just signed a new deal less than a year ago,” Dana stated when questioned about Jones’ recent tweets. “He’s got eight fights left on his deal. What do you want me to tell you? The guy’s got a deal.

“Same thing with Masvidal. Masvidal just signed a new deal seven months ago. These guys both got brand new deals that they were more than happy to sign less than a year ago.”

Dana continued to defend himself, reminding Foxworth that we’re currently in a pandemic.

“Does anybody feel like they make too much money? Nobody does. If we were talking about a thing where these guys had old contracts from three years ago and it’s like ‘that was three years ago that I did this deal, let’s [renegotiate].’ They signed these less than a year ago. This was months ago,” Dana said.

“By the way, I don’t know if you know this but we’re in a pandemic and no other sports are going. Oh, by the way, every other sport out there is arguing about money right now. I haven’t laid off one employee. I haven’t asked any of my fighters to take less money, and you don’t hear me out here crying about, ‘No, I don’t get any gates, I don’t have this, I don’t have [that].’ You don’t hear me crying. I’m running my business. I’m paying everybody. Right now, if you think it’s easy to be a business owner right now here in today, you are right out of your mind. There has never been a harder time to do business than right now. Guess what? I’m pulling it off.”

Foxworth countered this by pointing out that UFC maintains leverage over their fighters with a “take it or leave it” attitude.

“I’m not informed enough to know whether contracts are fair or not, but I understand when there’s a track record of a number of athletes over a period of time having an issue with someone or a company, then that seems like a group that needs unionization in order to have the leverage to get the things that they want.”

Numerous attempts have been made to form a fighters’ union in an effort for collective bargaining, but none of them have been successful. Dana failed to address the union effort but again defended his actions.

“Welcome to the fight business, my friend,” Dana responded. “So right now we’re in a pandemic and all this stuff is going on. We just signed a contract eight months ago. You see me saying, ‘Oh no, no, this is going on and that’s going on, I have to pay you less money.’

“No, I’m paying them exactly the same amount of money no matter what’s going on. In the history of this company, I’ve never asked a fighter to go backward, ever. I have 630 fighters under contract and we’re talking about two.”

While this may be a good explanation for fans, Foxworth does not feel the same. As an athlete whom was apart of a players’ union, Domonique believes the complaints raised by Jones and Masvidal are valid and speak to a larger issue within the UFC.

“I do know the ins and outs of sports labour,” Foxworth said. “I know that when you have a bunch of angry, upset athletes, there’s normally a reason why they should be angry and upset.”

Who’s side are you on, Dana White’s or Domonique Foxworth?