UFC: Dustin Poirier Thinks Justin Gaethje Can Be A Problem For Khabib 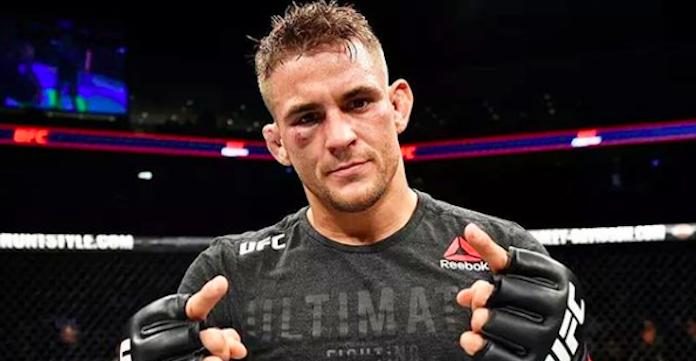 Dustin Poirier put on an elite display of grit and determination this past weekend against Dan Hooker at UFC Vegas 4, in a ‘fight of the year’ candidate. Despite falling short in his title bout against Khabib Nurmagomedov at UFC 242, ‘The Diamond’ has climbed back up to the pinnacle of the lightweight division.

The two men set to fight for the belt later this year are Justin Gaethje — who comes off a dominant win against Tony Ferguson at UFC 249 — and the aforementioned dominant champion, Khabib.

Curiously enough, Poirier knows the two men involved in the next UFC lightweight title fight, very well. The Louisiana fighter faced Gaethje in an extraordinary back and forth battle at UFC Glendale and, as mentioned previously, challenged for Khabib for the belt last September.

Poirier spoke to MMA Fighting about his prediction for the upcoming contest between Khabib and Gaethje.

“Let the better fighter win. That’s all I’ve got to say. I’m not really rooting for anybody in that fight.”

‘The Diamond’ also discussed the keys to victory for Gaethje, stating that the interim champion is no walk in the park for ‘The Eagle’. As a former All-American college wrestler, ‘The Highlight’ is no stranger to the grappling world and, if he keeps his back away from the fence, Poirier believes the Dagestani could have a rough night ahead of him.

“But will Justin be able to keep his back off the fence and land those shots and make Khabib work for takedowns in the open? That’s the big question.”

Regardless of who emerges as the winner between Gaethje and Khabib, Poirier has positioned himself once again in the title contention after his performance this past weekend.

With many fans suggesting fights between the Lafayette-born athlete and the likes of Conor McGregor and Tony Ferguson, it seems that Poirier is not far from another shot at the UFC 155lbs belt.

Do you agree with Dustin Poirier’s prediction for the title fight between Justin Gaethje and Khabib Nurmagomedov?