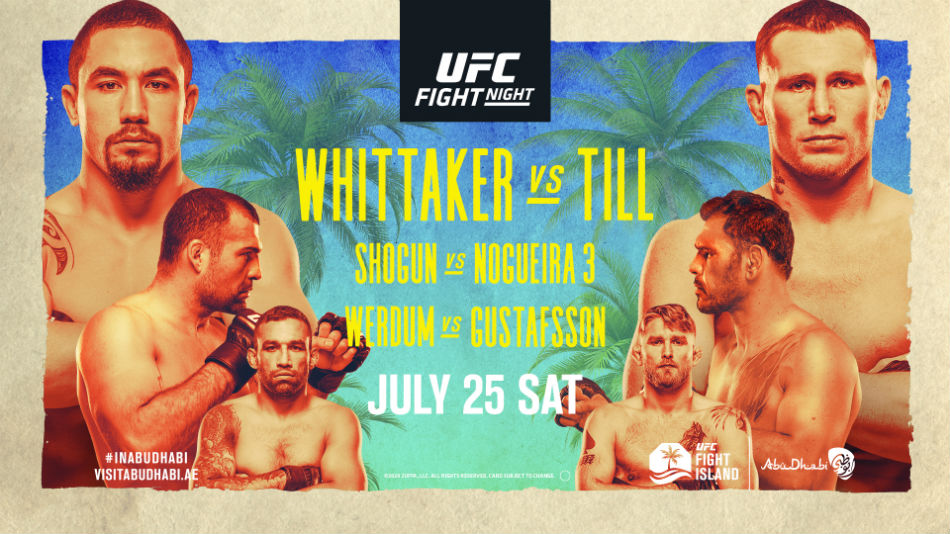 UFC Fight Island 3 goes down on Saturday night on Yas Island in Abu Dhabi. The final card of the first stint on Fight Island will see Robert Whittaker and Darren Till throw down in a hugely anticipated middleweight clash in the main event.

Whittaker hasn’t competed since losing the UFC middleweight title to Israel Adesanya at UFC 243 last October. The loss ended ‘Bobby Knuckle’s’ run of nine straight wins inside the Octagon. Having lost to Tyron Woodley and Jorge Masvidal, Till moved up to middleweight and got back to winning ways, earning a hard fought split decision win over Kelvin Gastelum at UFC 244.

In the UFC Fight Island 3 co-main event, ‘Shogun’ Rua is set to face his fellow Brazilian Antonio Rogerio Nogueira at light heavyweight, in a trilogy bout. ‘Shogun’ won both their previous clashes, via unanimous decision. ‘Lil Nog’ has confirmed that this will be his last fight, before hanging up his gloves.

Elsewhere on the UFC Fight Island main card, Alexander Gustafsson comes out of retirement and moves up to heavyweight, to face off against the former champion, Fabricio Werdum; and Carla Esparza takes on Marina Rodriguez.

This is how the MMA world reacted to UFC Fight Island 3: