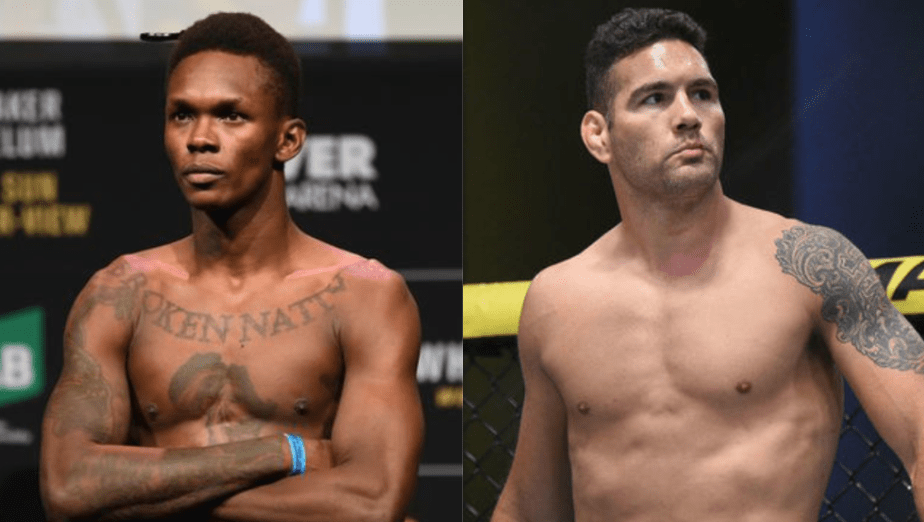 Israel Adesanya is currently on a two week quarantine in New Zealand, having successfully defended his UFC middleweight title against Paulo Costa last weekend at UFC 253 on Fight Island in Abu Dhabi. And with time on his hands, ‘The Last Stylebender’ has spent a lot of his time throwing shade in the direction of ‘Borrachinha’ and Jon Jones. Now, you can add Chris Weidman to the list.

Speaking recently to Chael Sonnen on his ‘Beyond The Fight’ podcast (as transcribed by Middle Easy), Weidman expressed his confidence in beating Adesanya.

“Absolutely,” Weidman proclaimed. “I think that’s a tailor-made matchup for me. Those athletic strikers, tall lanky guys, I’ve proven that I can beat. I think pressure, wrestling, heavy punches and kicks…just nonstop pressure is what you need to beat them. That’s the recipe that beats those guys. I’ve proves that with Anderson Silva twice, Uriah Hall another one. Those guys are in trouble against me.

“I think that’s an exciting fight to make,” Weidman continued. “If you look up and down the rankings, I don’t think there’s too many other fights that can excite people the way our narratives could work, and what I bring to the table. It’s not any bulls***, it’s just facts. If you’re into MMA and you really understand the game, you look at my game and you know I present some serious trouble for Adesanya, and more than anybody’s ever had in the past. He hasn’t really fought any other great, accoladed wrestler, other than Yoel Romero who doesn’t use his wrestling so I don’t even count that. I’m the type of guy that will bring that pressure, and I will take him down and ragdoll him on the floor.”

Weidman followed up his comments with a tweet earlier today, describing Adesanya as ‘just another [Anderson] Silva without the black belt in Jiu Jitsu’.

As you would expect, it didn’t take long for Adesanya to respond to the former champion.

At the time of writing this, Adesanya is yet to respond to Weidman but if and when he does, we will update this article below.

Would you give Chris Weidman a chance against Israel Adesanya inside the UFC Octagon?