UFC – Israel Adesanya On Paulo Costa: I’m Knocking Him Out 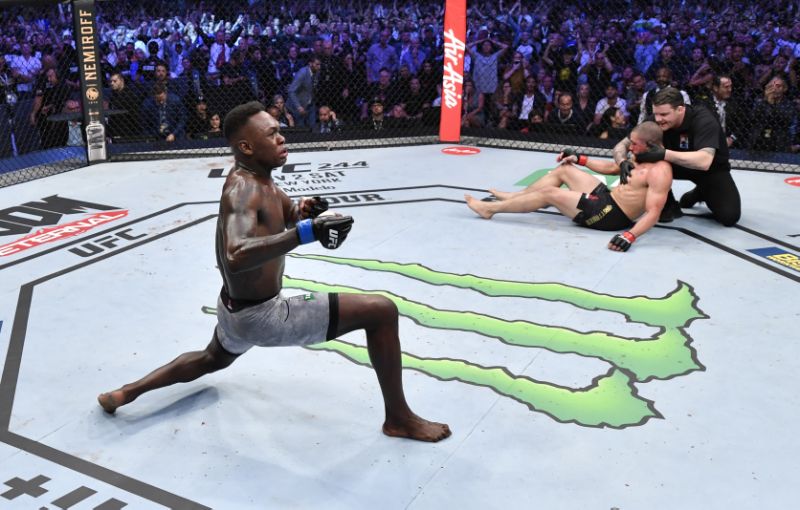 Current UFC middleweight champion Israel Adesanya is ready to silence the critics, when he defends his title against Paulo Costa.

Adesanya remains undefeated (16-0) throughout his MMA career and knocked out Aussie fighting legend Robert Whittaker at UFC 243 to secure the 185lbs belt.

The ‘Last Stylebender’ quickly amassed fans in the UFC due to his lightning fast striking style and elusive movement under pressure. However, a lacklustre performance against Yoel Romero in his first title defence garnered Adesanya a large amount of criticism.

Speaking to MMA Junkie, Adesanya said he wants to restore his former reputation as an exciting fighter with a finish over Costa and deprive the hard hitting Brazilian of his undefeated status.

“I look forward to this game because a lot of people after that fight – it’s perfect: I let them sleep on me. In the movie of my life, even in my documentary – like every movie, things are going great and then you need, ‘Oh, something bad’s happened,’ and then you need the finish of the movie where it rises up again.

“The last fight, because of the criticism unjustly that I got, the dip, it’s like the negative part of the movie. And then this bit is going to be the bit where I just blow everything out of the water and I just rise to the occasion and everyone is like, ‘I can’t believe he did that.’ You guys are going to be really surprised. It’s going to be etches of UFC 126, [Vitor] Belfort vs. [Anderson] Silva, that type of s***. You’re going to be really surprised at how this fight plays out because everyone is already counting me out.”

Adesanya has expressed a strong interest in competing on the UFC’s ‘Fight Island’ since its inception last month. With Dana White’s recent claim that the island is under construction, Israel believes that his next fight will take place there.

“I like ‘Fight Island,’” Adesanya said. “The movie, like the cinema I have in my head – because I’m the protagonist, right, and Costa would be the antagonist in the end of this movie – and to finish it off on ‘Fight Island,’ that just seems like some ‘Mortal Kombat’ type of s***. It’s just like, you couldn’t have scripted it any better.”

Costa’s most recent walk into the Octagon was also for a bout with Romero at UFC 241, but he managed to land over twice as many strikes on the Cuban Olympian as Adesanya did. Despite missing out on the finish, the Brazilian’s five previous opponents all succumbed to his devastating power.

However, Adesanya believes that he has all the answers to negate his opponent’s heavy strikes.

“I brought back my counter striking game for the Robert Whittaker fight, but also before that, you guys have seen like in the Kelvin Gastelum fight, I showed my toughness. I showed I can be aggressive. I showed I can walk people down,” Adesanya said. “You will be surprised how I’m going to walk this guy down at a certain point in this fight, how he’ll be the one taking a backward step.

“It’s finishing – I’m knocking him out. That’s how I feel. It’s kill or be killed. Don’t get me wrong – like, I don’t think he’s going to catch me, and if he does, he’ll be quite surprised at my durability because a lot of people forget. They say, ‘Oh, he was scared of Romero’s power.’ It’s like, do you know how many f***ing c***s I’ve fought in this game – not just in MMA, but in kickboxing? Everyone has power, but there’s levels to this power s***.”

The final tool that ‘The Last Stylebender’ can rely on is his cardio.

“I look forward to the challenge, and I’ve seen this style so many times,” Adesanya said. “He’s orthodox. He’s very good. He’s very basic, but so am I. But at the same time, I can be different. I’m the one who will dictate this fight – the pace of this fight will be dictated by me because you know who has the pace in this fight and we know it’s not him because he doesn’t have the pace or the gas tank to f*** with me.”

Who do you think wins, when Israel Adesanya gets a chance to defend his belt against Paulo Costa?