UFC – Jedrzejczyk: Zhang Is Very Strong But Not That Technical 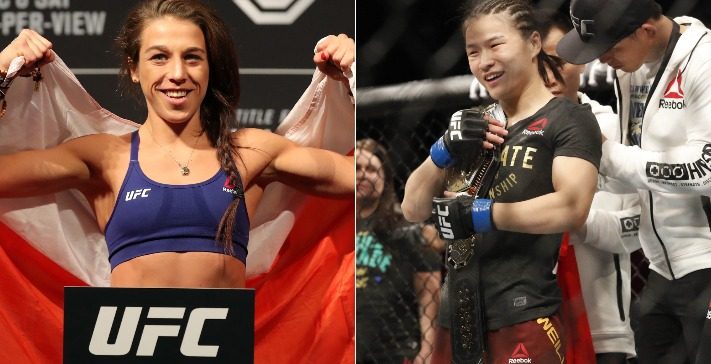 Former UFC women’s strawweight champion Joanna Jedrzejczyk is eager to get her hands on the reigning titleholder Zhang Weili in their upcoming championship showdown at UFC 248, on March 7th at the T-Mobile Arena in Las Vegas, Nevada.

Ahead of the mouth watering meeting between the two, Jedrzejczyk recognises the power that the Chinese champion possesses.

“Every opponent is different, and she’s definitely very strong. She’s young, very hungry, her punches are juicy, and I watch her fight two days ago with Mikey Brown because we – Mikey Brown is crazy about this fight,” Jedrzejczyk told the media at UFC 245 (as transcribed by MMA Junkie).

Zhang emphatically earned the women’s strawweight belt last August, by knocking out Jessica Andrade in front of her fellow Chinese countrymen at UFC Shenzhen. But the fighter out of American Top Team believes she that has the perfect strategy to neutralise Zhang.

“We’re going to have a good plan, but of course I will have to take this fight second by second. Like I said, she’s very dangerous, but I will show her this Polish power very soon.”

“Juicy and crispy and, yeah, she’s wild. She’s wild. Definitely she’s wild. She’s not that technical of a fighter, but she’s very strong. She’s big, she’s massive, so that’s why her punches are very juicy. I’m tall in the strawweight division, so I’m never going to be like bully person you know, like big person and very muscular.”

How do you see the fight going between Zhang Weili and Joanna Jedrzejczyk at UFC 248?