UFC – Joanna Jedrzejczyk: I Deserve A Bigger Piece Of The Cake 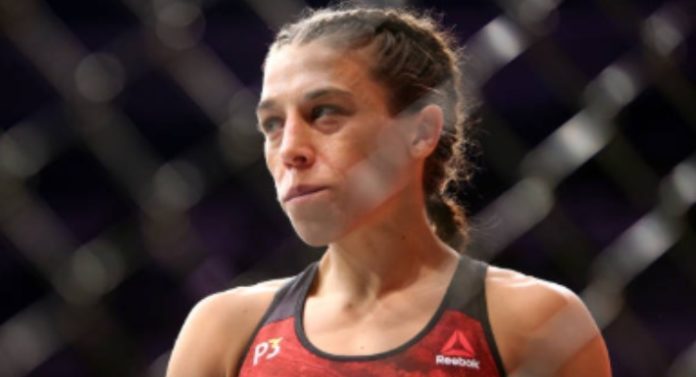 Joanna Jedrzejczyk says she does not plan on fighting anytime soon.

Jedrzejczyk last fought at UFC 248 in March against the current strawweight champion Zhang Weili, losing by way of a razor close split decision in what many consider as the fight of the year. Since then, she has spent the majority of her time back in her home country of Poland due to the coronavirus.

Happy To Be Back

The former UFC strawweight champion reunited with her American Top Team coaches in November however, and said that she couldn’t be happier. Speaking to SCMP MMA‘s Tom Taylor, Jedrzejczyk said that she has been training hard since returning to ATT, and is ready to fight again.

“It was eight months away from American Top Team and I was happy to be back,” Jedrzejczyk revealed. “I was training very hard and I’m even more motivated to fight again. I’m still feeling this fire. It’s crazy. My body, my mind is all ready to fight and train hard.”

No Fans, No Fight

The UFC hasn’t put on any events with fans in attendance since Jedrzejczyk competed at UFC 248, due to coronavirus restrictions. Despite her excitement to get back inside the Octagon, the Polish star said that she doesn’t see herself fighting without the fans.

“It’s not going to happen anytime soon because of the COVID situation,” Jedrzejczyk said. “I don’t see myself fighting without fans. There’s no sport without fans. For me, it’s always extra motivation, an extra battery pack. Maybe I would, but I don’t want to, so I’ll just wait because I truly believe everything is going to be good again very soon.”

When Jedrzejczyk does finally return to the Octagon, she believes that she has earned the right to demand more money from the promotion.

“I’m planning to talk [to the UFC], maybe in January,” Jedrzejczyk said. “We put on a hell of a show and I deserve more money. I deserve a bigger piece of [the] cake. I don’t want to complain like other fighters – I know there’s 500 athletes [on the roster] – but I feel like I’m a big part of this company.”

Earlier this month, UFC president Dana White claimed that Rose Namajunas turned down a title fight with Zhang, and as a result the promotion is looking at Carla Esparza as a possible alternative. The UFC spearhead’s claims were denied by ‘Thug’ Rose however.

Sharing her thoughts on the matter, Jedrzejczyk said that Namajunas deserves the next title shot.

“I really believe Rose will be the next challenger for the strawweight title,” Jedrzejczyk stated. “All respect to Carla Esparza – she made it to the league, she was the champ – but I feel like the top four in the strawweight division is different.

“Maybe they’re trying to push [Namajunas], but she is a very smart human being and she’s going to make the right decision at the right time, and she’s next. I don’t want to say, ‘Who’s Carla Esparza?’ because I know who she is. I have tons of respect for her, but Rose is next.”

Whenever the fight between the two fighters takes place, Jedrzejczyk believes that it will be a very intriguing one.

“Rose is such a smart fighter – her reach, her distance, her footwork,” Jedrzejczyk opined. “There is some power behind her punches. She proved that. She knocked me out. But Weili has character. She’s so strong. She’s always going forward. It’s going to be interesting.”

With only two wins in her last six fights, Jedrzejczyk doesn’t want to rush herself into a bad decision, especially when she aims to regain the strawweight title.

“I’m just taking my time and it’s going to happen one day,” Jedrzejczyk said. “I don’t have to hurry. After I lost, I wanted to hurry to get the belt back, but not any more.

“I’m patient. It’s going to come back, but everything has to be right. It’s not just about money. I used to do this for free – even pay for myself to go compete in world championships. I feel like I lost my last fight because there is something better waiting for me, something bigger. I wait, I learn. I evolve every single day and I get better.”

Do you think Joanna Jedrzejczyk can go on to become the UFC strawweight champion again?