UFC – Jorge Masvidal On Nick Diaz: I Know We’re Going To Have A Fight 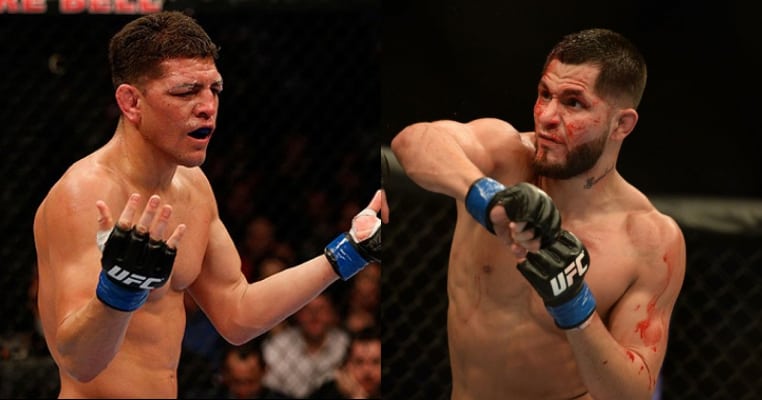 Jorge Masvidal has had a cult following since his backyard street fighting days, back in the day. That all changed in 2019 though. After spectacular knockouts of Darren Till and Ben Askren, ‘Gamebred’ catapulted himself into the big league in the world of MMA. This was evident at UFC 244, when the 35 year old fought Nate Diaz for the BMF belt.

And to top of what has been an almost perfect year, Masvidal defeated Nate at UFC 244 earlier this month, to earn himself the title of the Baddest Mother F***er on the planet.

Not long after UFC 244, Nate’s big brother Nick called out Jorge. Despite not having fought in five years, Nick said he wanted to avenge his brother’s loss.

And it didn’t take Masvidal long to respond, accepting the challenge. Speaking to Brendan Schaub on his ‘Food Truck Diaries‘ (as transcribed by The Mac Life), Masvidal said that when it comes down to it, he knows that he and Nick are going to have to fight.

“If he’s got that fire lit under him, I know we’re going to have a fight. I know Nick’s a dog. He’s going to take whatever I can give, and I’m going to give him everything that I got to hit the off button, to turn him off, as well, so I’m excited for the fight.

“I know he wants to hurt me. He has to avenge his little brother, so it’s a fight that pumps me up.”

Masvidal has nothing but respect for Nick and knows that a fight with the older Diaz brother would be huge.

“Huge fight, and it has a huge backstory, too. It’s definitely a fight, and always growing up, me and Nick both fought in Strikeforce in different shows, and I’ve always liked Nick’s style, as well. I’ve always liked how he scraps. I never thought he was the most skilled guy, but I think he’s one of the guys with the biggest heart, you know? Would just lay it all out there, win or lose. He’d always give it his all, and that’s something that I truly admire, that quality in a fighter. If he’s the fastest, strongest, it’s good, but my favourite quality in a fighter is the dog, is the guy that just doesn’t take no for an answer – even if he gets beat up, but he just never took no for an answer.”

Do you think we’ll see Jorge Masvidal vs Nick Diaz in 2020?