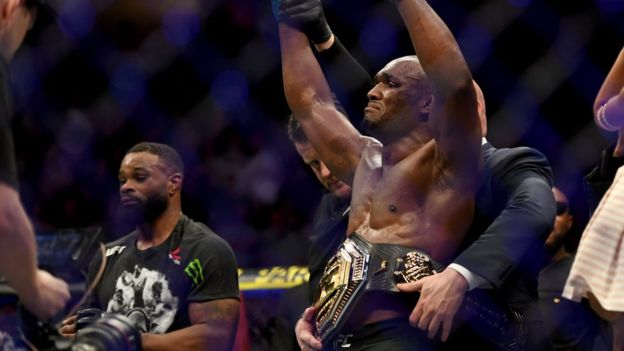 Kamaru Usman is on a 15 fight win streak and 11-0 in the UFC. He’s beaten the likes of Leon Edwards, Damian Maia, and Rafael dos Anjos. He dethroned Tyron Woodley and followed up with a fight of the year contender with Colby Covington (that one was a ‘slobber knocker’. If you haven’t seen it, go watch it!). And now, well, now the aptly nicknamed ‘Nigerian Nightmare’ wants Jorge Masvidal.

Speaking to ESPN (as transcribed by MMA Junkie), Usman made it very clear that the next fight will be against the former Miami street fighter and now title contender, Jorge “Gamebred” Masvidal. Or ‘Street Jesus’, if you’re cool. The 32 year old UFC welterweight champion says it’ll happen, whether it’s on Dana White’s Fight Island or in an empty arena. In fact, Kamaru prefers the harsh solitude of an empty arena.

“I want to see how [Masvidal] is going to react, stepping into the cage with me when there’s no fans around,” Usman said. “There’s no one to scream, no one to cheer for him – just him getting pummeled, taken down, dropped on his neck, dropped on his head. I might suplex him a couple times. I mean, Rustam Khabilov did all kinds of things to him, so I might just reenact that.”

Usman is a wrestler, a former NCAA Division two champion. Leading The University of Nebraska at Kearney to its first ever team title in 2008. Masvidal is predominantly a boxer. An American Top Team alumni whose roots stem deep from backyard fights to the tops of MMA popularity.

Both men have accused the other of not signing the contract to fight each other in recent weeks. However, Usman says that they’re definitely going to fight.

“We are at 100 percent,” Usman said. “This is the guy. I’ve said it over and over again: Anything you say about me, to me, can and will be used against you, and he has just stepped over that line to where it’s 100 percent. That’s the fight that I want. That’s the fight that makes sense. That is the next victim, and look at what they just pulled. I mean, look at the situation they just pulled. You ran your mouth. You said you wanted to fight. All right. Let’s do it.

“Absolutely, that ‘Fight Island’ sounds good. It doesn’t matter if there’s people there, if nobody’s there – it doesn’t matter. I get the same pay cheque.”

Do you think we’ll Kamaru Usman vs Jorge Masvidal this summer? And if so, who will walk away with the UFC welterweight title?