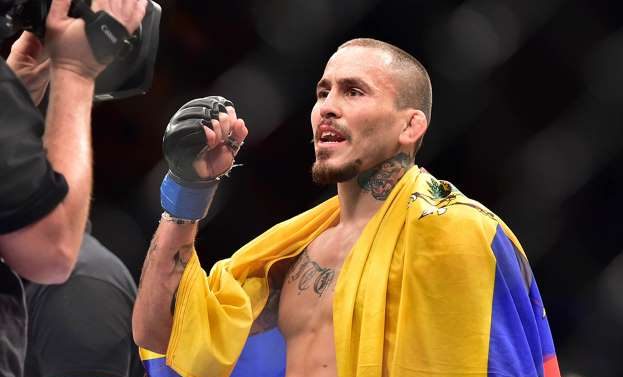 Marlon Vera has proven to be one of the most promising prospects in the UFC’s bantamweight division. ‘Chito’ has enjoyed an impressive win streak, finishing six out of his last seven opponents inside the Octagon.

After defeating former undefeated prospect, Sean O’Malley at UFC 252, Vera cemented himself as one of the top fifteen bantamweight in the UFC. Now, with his stock at an all-time high, the Ecuadorian is targeting more challenging opponents.

Such is the case with former featherweight champion Jose Aldo, who is coming off three consecutive losses — the last two of which took place at bantamweight. Vera has expressed his interest in fighting the Manaus native, guaranteeing it would be ‘a beautiful fight’.

‘Chito’ spoke to MMA Junkie about the possibility of facing Aldo, stating that he has the skills to put the Brazilian legend away.

“I’d retire him in a minute – bring it,” Vera said. “I like that fight. That fight would excite the (expletive) out of me, and I’d take it. I’d take it, and I believe I’d finish him, so that’s a beautiful fight to make.”

Although expressing his respect for Aldo, Vera stated that he never was truly a fan of the Brazilian — even when the former champion dominated the featherweight division — or his countryman, Renan Barao.

Nevertheless, ‘Chito’ recognises Aldo as a great fighter. Regardless of the opinion the Ecuadorian has about his potential rival, this fight is one that truly interests Vera.

“I watch every single fight, but I didn’t follow their careers – I didn’t get to like them,” Vera said. “It’s a weird thing. There’s guys that I love and then guys I don’t care, and he’s one of the guys that I don’t really care.

“I’m sure he’s (Aldo) a sweetheart, but some fighters you just don’t like, you don’t cheer for. Every time he fought, I knew he was going to beat the guys that he beat, and I expected him to lose to Conor [McGregor]. I expected him to lose to Max [Holloway]. But I like him – he’s a great fighter. But I just don’t become a fanboy over the years. I don’t know, I just didn’t.”

Vera is also confident in his cardio; the Manabí born fighter is enthusiastic about a potential five-round affair. Despite finishing all of his opponents in his last six wins inside the distance, ‘Chito’ states he is capable of keeping up the pace for twenty five minutes.

“I would love to fight five rounds,” Vera said. “I know I have the gas tank. I know I have the power to keep it up. And then on top of that, if they put me in another co-main event spot or in a big pay-per-view card, I’d take it.”

Whether he gets his fight with Aldo remains to be seen, but Vera has shown his worth as a contender beyond any doubt. Surely, ‘Chito’ will be involved in many big fights in the foreseeable future.

Would you like to see Marlon ‘Chito’ Vera face Jose Aldo?