UFC: ‘The Korean Zombie’ Is Prepared To Fight Again To Earn Title Shot 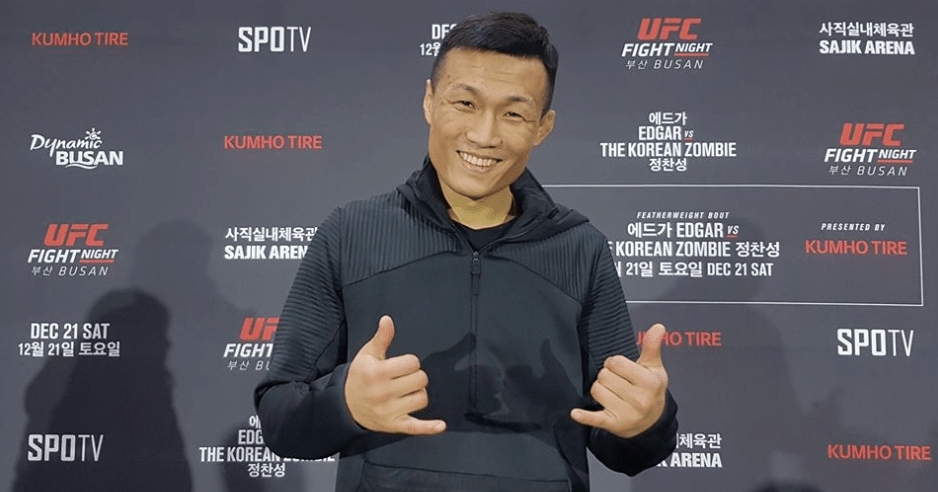 When ‘The Korean Zombie’ (Chan Sung Jung) headlined the UFC’s 25th Anniversary card in November of 2018, the fight ended in devastating fashion for the 32 year old, as he succumbed to a last second spectacular no-look elbow knockout, against Yair Rodriguez.

In contrast, ‘The Korean Zombie’ ended 2019, and the decade, as the last man to have his hand raised inside the Octagon, having scored a first round knockout over Frankie Edgar in the UFC Busan main event.

The impressive win over the former UFC lightweight champion, will see ‘The Korean Zombie’ go into the new decade as many fans’ number one contender to challenge Alex Volkanovski. And as the popular South Korean told MMA Fighting, he believes he would cause the new champion more problems than the former champion, Max Holloway.

“I’m eager to know when he will be back. I think I’d be able to beat Volkanovski easier than Holloway could.”

If ‘The Korean Zombie’ is to challenge Volkanovski next, he will have to wait for the Australian to recover from surgery on his broken hand. Although he himself will go under the knife in early January, for an ongoing eye condition that has resulted in him seeing double.

“During my stay in the States, my eye condition became worse, and in order to treat it as soon as possible, I had no choice but to let the UFC know. Fortunately, I was told that there wasn’t any harm to my eye, it was just the double vision, so I had to choose whether to fight or not.

“If the doctors told me it was going to get worse if I get hit in the eye, I would’ve gave it another thought, but they told me it was okay to be hit, and I was glad that I was able to stay in this sport.”

Not only was ‘The Korean Zombie’ able to compete in his home country, his performance put the entire UFC featherweight division on notice. And after such an emphatic win in front of his home fans, he knew he had to call out the champ.

“I had this thought in the back of my head where, ‘If I were to knock Frankie out, I’d have the right to call Volkanovski out.’ Then it happened way too soon during the first round, and without hesitation, I called him out.”

With Holloway expected to get the immediate rematch with Volkanovski, ‘The Korean Zombie’ acknowledges that he may have to earn another win inside the UFC Octagon before getting his title shot.

“I do kind of think that I may have to fight once more [before the title shot]. If I have to face another opponent, I’ll go for it.”

Who would you like to see ‘The Korean Zombie’ fight next?