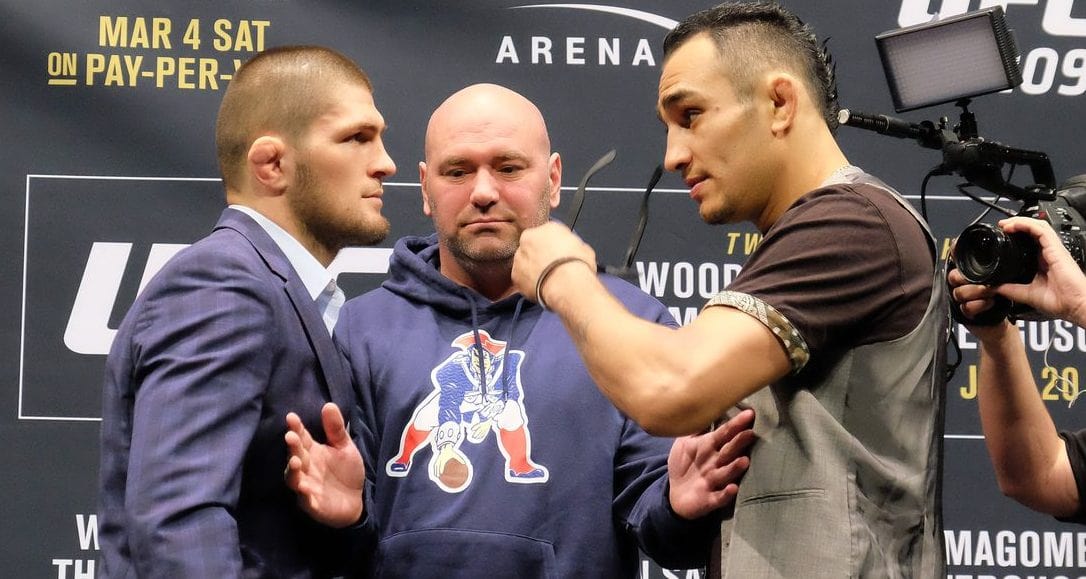 Tony Ferguson versus Khabib Nurmagomedov is perhaps the most cursed fight of all time, yet the former interim lightweight champion still believes the fight is inevitable.

In April of this year, Ferguson was set to face Khabib for the UFC lightweight title, but unfortunately the bout was cancelled for the fifth time in five years, this time due to COVID-19. After the Dagestani found himself stuck in Russia due to travel restrictions, Justin Gaethje stepped in as a late notice replacement, and ultimately stopped ‘El Cucuy’ in the fifth round of the UFC 249 main event. As a result, ‘The Highlight’ won the interim lightweight title, and will challenge ‘The Eagle’ for the undisputed 155lbs title this weekend at UFC 254.

“I Will Fight Khabib”

Earlier this week, Khabib questioned whether Ferguson will ever be the same fighter he was before the Gaethje fight, after taking so much damage throughout the contest. Speaking to ESPN, the 36 year old responded to the champion’s comments.

“I see fear in his voice if he thinks he has to talk bad about people,” Ferguson said. “He can’t put that s*** in my head. I will fight Khabib at one point or another. He will see me before he retires. We’ll make that a point.

“I think everybody is writing me off after one loss, and f*** them. The casual fan base is trying to, but my hard-core fans are too much. They know too much. My value is way too much.”

Ferguson’s name has been linked with UFC newcomer Michael Chandler, who is currently on Fight Island in Abu Dhabi, serving as a backup for Khabib versus Gaethje. ‘El Cucuy’ has previously stated that he’s not interested in fighting the former Bellator champion, especially if he won’t be paid as much as him.

Days ahead of UFC 254, Ferguson has now said he would be open to welcoming Chandler to the promotion (assuming he’s not needed this weekend), but wants to be compensated accordingly. Particularly after saving the UFC 249 card.

“Michael Chandler hasn’t earned his way to the top,” Ferguson said. “But if that’s who Dana White wants me to fight, you know me: I put my boots on, and I go to work. When it came to COVID, I made weight, and I went to work. There was a point, 72 hours, it was myself, Dana, [UFC matchmaker] Sean Shelby and my wife, just trying to make that s*** happen. If I hadn’t taken that fight, how many people would not have gotten paid?

“Do I want to fight? Yes. I want to fight in December. I’m f***ing training. Let’s go. But I don’t think somebody who doesn’t even belong here should be paid more than me. That’s what I’m saying.”

Ferguson made it clear that he is on good terms with UFC president Dana White, and ensured that he will come back from his first loss since 2012 as a better fighter.

“I learned a lot about myself in that fight,” Ferguson said. “I learned I’m not going to put myself in that position again, to take damage like that. I wanted to see how tough I was, and now I’ve found out. That scares people to do that, so I’ve learned how to work much better and more efficiently.”

Do you think we will ever see Khabib Nurmagomedov vs Tony Ferguson?