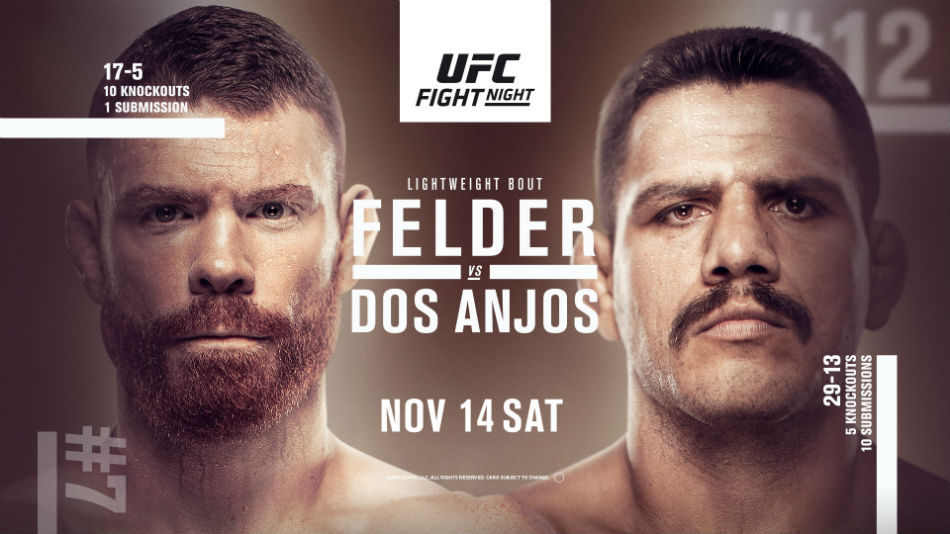 UFC Vegas 14 goes down on Saturday night at the APEX Center. After Islam Makhachev withdrew from the main event a week ago due to a staph infection, Paul Felder stepped in on five days notice to face Rafael dos Anjos in the headline bout.

Former champion Dos Anjos, is set to return to lightweight after competing at welterweight in his last eight fights. After winning his first three fights at 170lbs, the Brazilian then lost four of his next five. Most recently, losing to Michael Chiesa at UFC Raleigh at the start of the year.

After winning five in a row at lightweight, Felder came up just short in his last outing to the Octagon, losing a razor close split decision to Dan Hooker back in February at UFC Auckland.

In the UFC Vegas 14 co-main event, Abdul Razak Alhassan, who came in 1.5lbs over the welterweight limit, will face Khaos Williams. Louis Smolka also missed weight. As did Eryk Anders, whose middleweight clash with Antonio Arroyo ended up being removed from the card on fight day. Saparbeg Safarov’s middleweight bout with Julian Marquez was also scratched from the card prior to the weigh-ins, due to weight management issues.

* 30 minutes ahead of the first fight of the evening, it was announced that Smolka was removed from the card after being deemed medically unfit to fight as a result of a bad weight cut. UFC Vegas 14 will proceed with nine fights.

This is how the MMA world reacted to UFC Vegas 14:

The UFC returns next weekend with UFC 255, which will see both flyweight titles on the line. Deiveson Figueiredo is set to defend his belt against Alex Perez in the main event. While Jennifer Maia challenges Valentina Shevchenko in the co-main event.