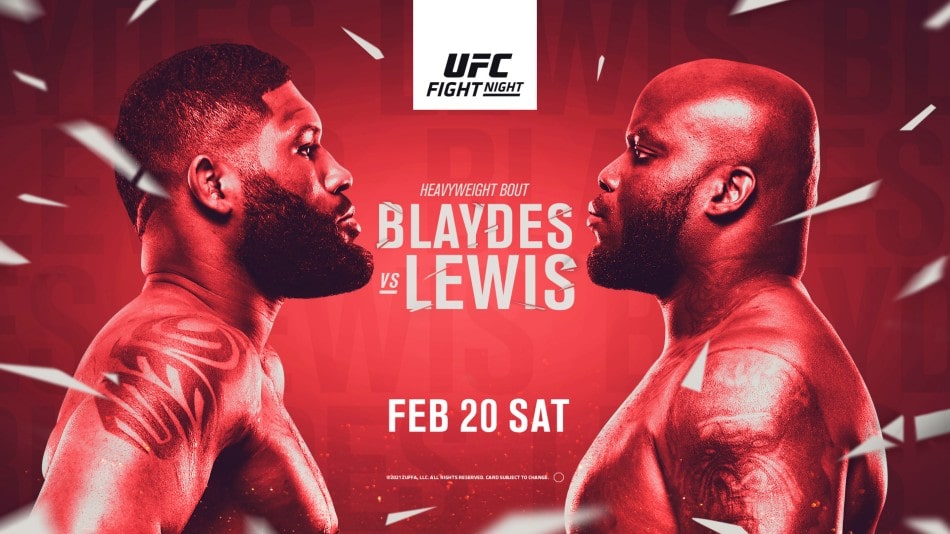 UFC Vegas 19 goes down on Saturday night at the APEX Center. Three months on from their originally scheduled fight, Curtis Blaydes and Derrick Lewis finally get to face off in the main event.

The top five heavyweight clash was originally booked for UFC Vegas 15 last November but Blaydes had to withdraw the day before the fight after testing positive for COVID. ‘Razor’ is currently on a four fight win streak, and is coming off a unanimous decision win against Alexander Volkov at UFC Vegas 3. ‘The Black Beast’ is also on a winning streak, having won his last three. Most recently he scored a second round TKO win against Aleksei Oleinik at UFC Vegas 6.

In the UFC Vegas 19 co-main event, Yana Kunitskaya faces Ketlen Vieira, who missed the bantamweight limit by 2lbs at the weigh-ins. Three more fighters also missed weight, all in the featherweight division; Jared Gordon missed weight by 4lbs, Drako Rodriguez also came in 4.5lbs over weight, and Rafael Alves who managed to come in 11.5lbs over, resulting in his fight with Patrick Sabatini being scrapped.

Drakkar Klose’s lightweight clash with Luis Pena was removed from the card just hours before the card got underway, after one of his corner tested positive for COVID.

Drakkar Klose vs. Luis Pena – Cancelled after one of Klose’s corner tested positive for COVID

Chas Skelly vs. Jamall Emmers – Cancelled after Emmers suffered from back spasms backstage when Skelly was already inside the Octagon.

This Is How The MMA World Reacted To UFC Vegas 19:

The UFC returns next weekend with UFC Vegas 20, which features a top ten heavyweight clash between Jairzinho Rozenstruik and Ciryl Gane in the main event.