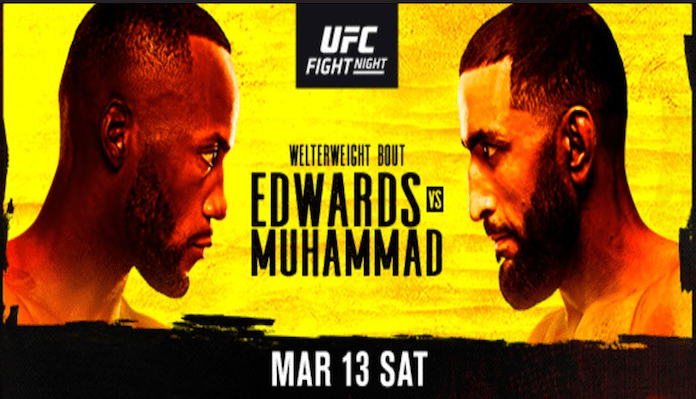 UFC Vegas 21 goes down on Saturday night at the APEX Center. After almost two years on the sidelines, Leon Edwards finally returns in the main event against Belal Muhammad in a top 15 welterweight clash.

Edwards hasn’t had the best of luck in recent times and was forced to sit out the whole of 2020. The Brit hasn’t fought since beating Rafael dos Anjos at UFC San Antonio. He was scheduled to face former champion Tyron Woodley in the UFC London main event one year ago, but the card became the promotion’s first cancelled event due to the global COVID panedmic.

Muhammad on the other hand, has fought three times since Edwards last stepped for inside the Octagon, winning all three. In his most recent outing last month, ‘Remember the Name’ beat Dhiego Lima via unanimous decision at UFC 258.

In the UFC Vegas 21 co-main event, Misha Cirkunov and Ryan Spann face off in a top 15 light heavyweight contest. The Latvian-Canadian hasn’t fought in 18 months since handing Jimmy Crute his first ever loss at UFC Vancouver. The 34 year old’s last six fights have all ended in the first round. ‘Superman’ is coming off a first round knockout loss to Johnny Walker last September at UFC Vegas 11. The loss ended his eight fight win streak.

Leon Edwards vs Belal Muhammad – No contest due to Muhammad receiving an accidental eye poke in the second round (0:18)

Eryk Anders vs Darren Stewart – No contest due to Anders landing an illegal knee in the first round (4:37)

This Is How The MMA World Reacted To UFC Vegas 21:

The UFC returns next weekend with UFC Vegas 22, which will feature a top ten middleweight contest between Derek Brunson and Kevin Holland in the main event.