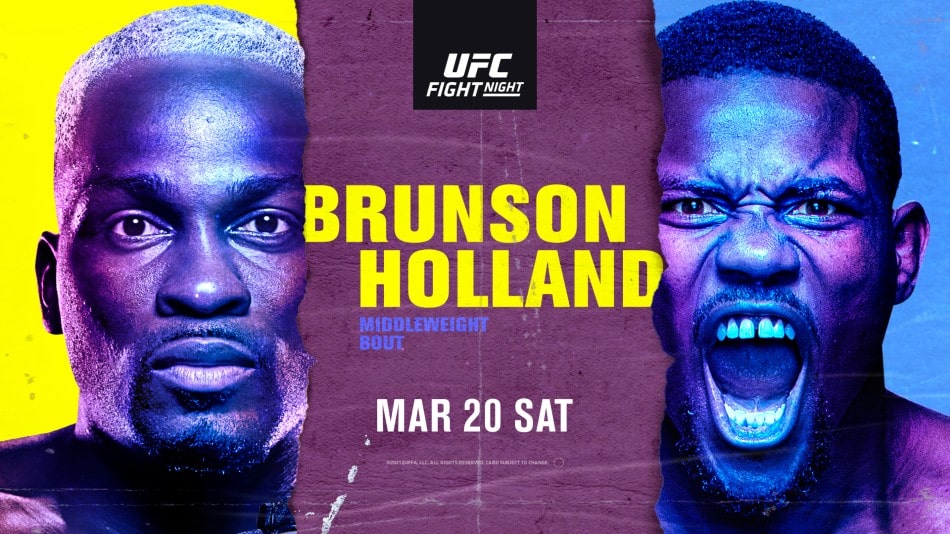 UFC Vegas 22 goes down on Saturday night at the APEX Center. In the main event, top ten middleweights Derek Brunson and Kevin Holland will look to take a step closer to a title shot against the champion, Israel Adesanya.

Brunson is on a three fight win streak, most recently coming off an impressive third round TKO win over Edmen Shahbazyan last August in the UFC Vegas 5 main event. Holland competed five times in 2020, winning all five. In his last outing, ‘Big Mouth’ scored the biggest win of his career to date, when he knocked out ‘Jacare’ Souza from his back in the first round at UFC 256.

The co-main event will see Gregor Gillespie face Brad Riddell in an exciting lightweight contest. ‘The Gift’ will look to bounce back from the first professional loss of his career against Kevin Lee at UFC 244. ‘Quake’ goes into the fight on a six fight win streak, with his last win coming against Alex da Silva Coelho at UFC 253.

UFC Vegas 22 is down to ten fights, after Gregor Gillespie vs Brad Riddell was removed from the card in the last few hours due to COVID protocols. According to sources, the lightweight bout will be rescheduled on a later date. The welterweight clash between Song Kenan and Max Griffin will now serve as the co-main event.

This Is How The MMA World Reacted To UFC Vegas 22:

The UFC returns next weekend with UFC 260, which will see Stipe Miocic defend his heavyweight title against Francis Ngannou in the main event. The co-main event between Alex Volkanovski and Brian Ortega has been postponed due to COVID protocols. The featherweight title will be rebooked on a later date.