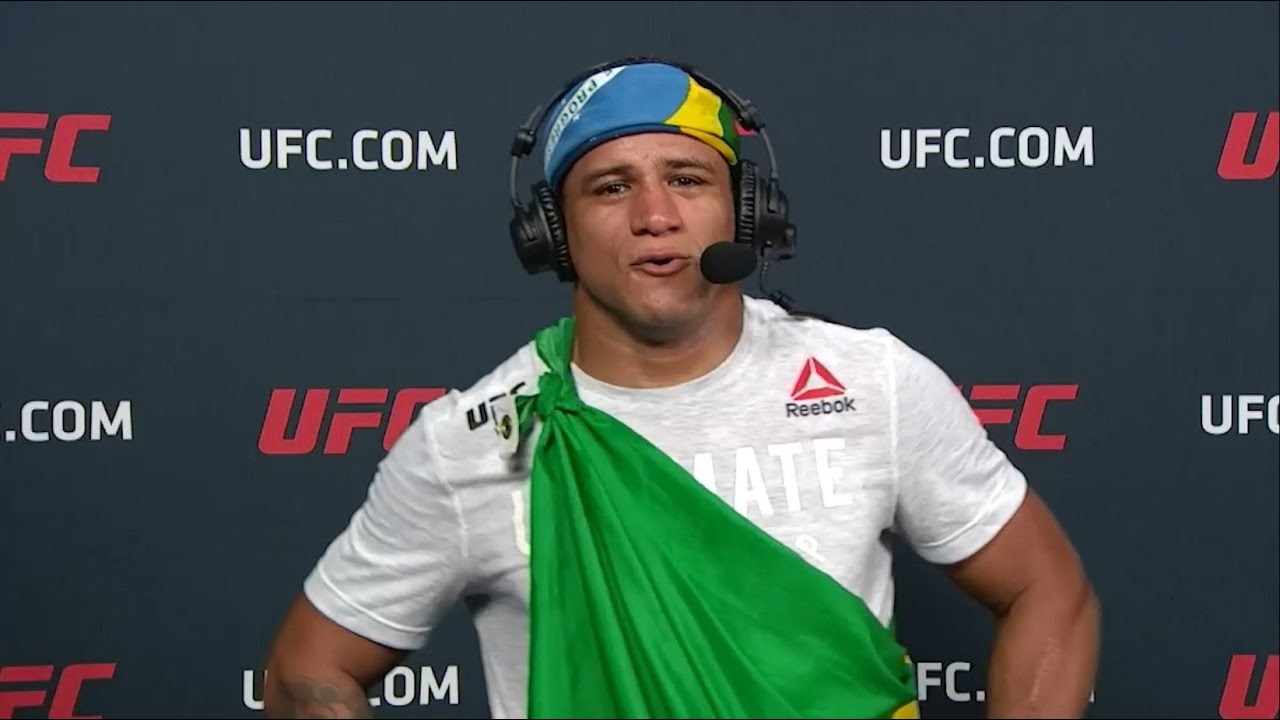 Gilbert Burns successfully defeated Tyron Woodley in a one sided main event at UFC Vegas. The welterweight prospect quickly gained the upper hand, when he opened up a huge cut above the former champion’s left eye, with some nasty ground and pound in the very first round. ‘Durinho’ then rolled with the momentum by pressuring ‘The Chosen One’ for the next four rounds.

During his post-fight interview with Daniel Cormier, the Rio de Janeiro native revealed that his diverse, high pressure attack was all orchestrated by legendary MMA coach, Henri Hooft.

“I had a dominant performance against a former world champion. Henry Hooft said ‘Put the pressure on him, stay in his face. He’s not gonna like that.'”

Burns proved that he has the cardio and heart required to become a champion. He was breathing and talking freely between rounds and appeared to be in incredible shape following the 25 minute contest.

“I could still do five more rounds,” Burns continued. “I’ll do some push ups right after this interview is done!”

The 170lb contender was quite clear about his plans for the future.

‘Durinho’ is now on a six win fight streak and will likely enter the UFC welterweight division’s top five rankings on Tuesday. Following the event, Dana White shared his thoughts on Burns’ performance and next move.

“His Jiu Jitsu is ridiculous. Great leg kicks. He hurt him to the leg. Kicks to the head. That kid can do anything and he’s aggressive. I actually thought he could fight more aggressively than he did but you gotta be careful with someone as dangerous as Woodley.

In his post-fight press conference, Burns responded to a question about training for a title fight, given the fact he trains with Usman at Sanford MMA.

“It will be weird you know. But we’re both professionals and I like him a lot. When he became champion, it really motivated me. I’ve seen him at zero.

“We always work together. I have the Jiu Jitsu and he has the wrestling, so we’ve always grappled a lot since the beginning. Yeah, I don’t know. It’ll be weird but I wanna fight for the title and he’s the champion.”

One thing that’s for certain is that Burns isn’t looking to take any time off.

“I just told Dana back stage. I wanna fight in July.

“Give me Masvidal. Give me Leon Edwards. Anyone, I just wanna stay busy.”

A loss in his comeback fight has now put Woodley in a tough position within the division. Speaking about the former champion’s future, Dana told reporters that it’s completely up to the him.

“He’ll determine that. I think he worked hard and got into great shape for this fight and took it very seriously. You know, he got dominated tonight. He will drop in the rankings and we’ll see what’s next. He’s 38 and has huge gaps in his fight time.”

Did Gilbert Burns do enough to jump ahead of his rival welterweight contenders and earn a title shot against Kamaru Usman?