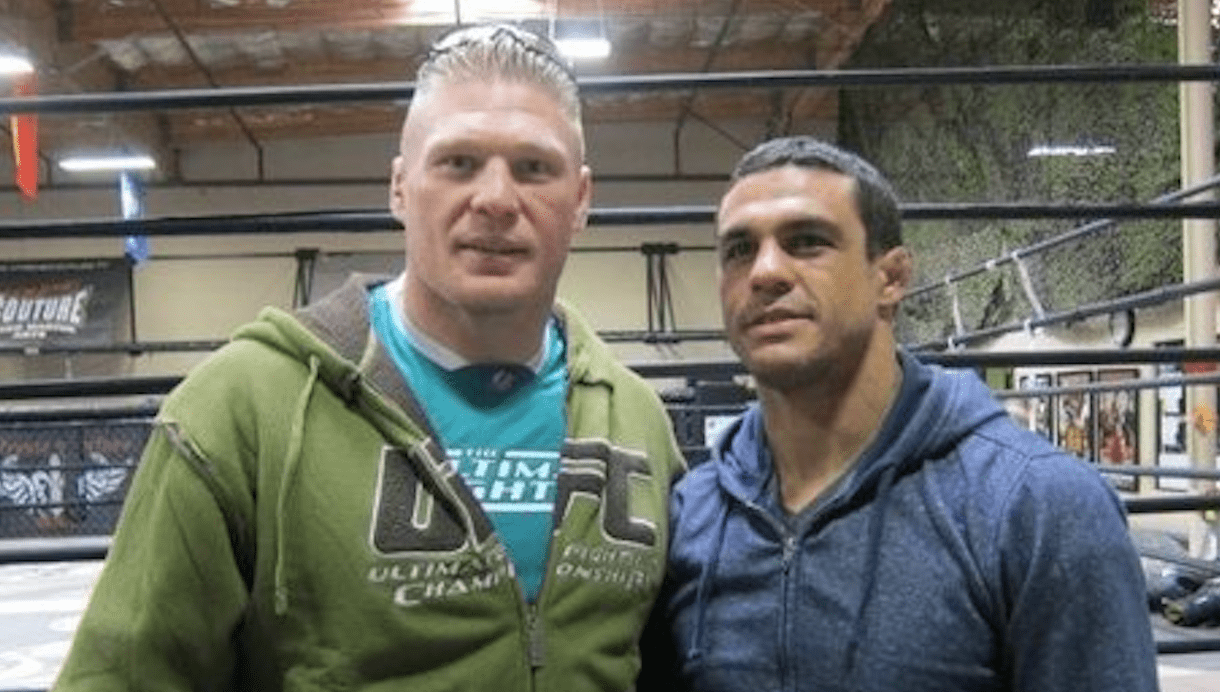 Since the expiring of Brock Lesnar’s WWE contract, several MMA fighters have expressed an interest in welcoming him back inside the cage. Including Vitor Belfort.

Lesnar became the first person to hold a title in both the UFC and the WWE, when he won the UFC heavyweight title in 2008. While Belfort is a former UFC light heavyweight champion, who is currently signed to ONE Championship. He was set to make his ONE debut against Alain Ngalani, before the global coronavirus pandemic forced the promotion to cancel numerous events.

In an interview with Submission Radio (as transcribed by MMA Fighting), Belfort said he would be ready to fight the former professional wrestler within eight weeks.

“Brock Lesnar, I think you’re a fraud. But I’ll give you a chance,” Belfort said. “I think you’re a fraud. If you really want to fight with me, let’s go bare hands, me and you. We put the gloves, we go combat, you know? I know you’re a very tough man. I heard you’re a grappler, but I’ll fight you, man. I’ll fight you any day, any time, and I think that’s a legendary fight right there. But I think he’s a fraud in MMA.”

Belfort believes a showdown with Lesnar would be huge for ONE Championship. But he also justified calling him a ‘fraud’, claiming he cut the line to get his shot at the UFC heavyweight title.

“[He’s a] fraud because he never paved the way, man,” Belfort continued. “He never fought MMA. He went there and he got a chance. He fought for the belt after one fight. Listen, I tell this to everyone, you listen to me very clearly, the only sport in the world, the only sport in the world where you can come in from any other sport, is MMA. An MMA fighter can never cross to football. They can never cross. Michael Jordan tried to cross from baseball and he couldn’t make it. Why? Because you have a process to make it. So, that’s what it is.

“We need to understand that MMA, a combat sport. Even YouTubers can fight. Even like if you’re a hockey player you can come and fight in these rules. That’s why it’s good, man, that’s what makes MMA so possible. You don’t need to have a career, you can make a career and you can become a persona and people can like you and they can buy you. Look at what Kimbo Slice did. And some make it. I take my hats off to the gangster, [Jorge] Masvidal. Because he really paid his way, man. People don’t realize, that guy paid his way. He deserves it.

“So, I respect fighters that really paid their way. They deserve to be in the spotlight. But, you know, I understand he can be in the spotlight of WWE. So, that’s what I mean. A fraud for MMA is this. He doesn’t deserve it, but he sells, man. Let’s go Brock. I’ll put my hands on you. That would be nice. I’ll make him pink.”

Lesnar most recently fought in MMA at UFC 200 in 2016, where he beat Mark Hunt by unanimous decision. However, the result was overturned to a no contest after he tested positive for banned substances. It was also his first fight in nearly five years. Belfort last fought at UFC 224 in 2018, where he lost by knockout to Lyoto Machida.

King Of The Jungle

Should they ever meet inside the ONE Circle, Lesnar would have a significant size advantage, but ‘The Phenom’ isn’t fazed.

“But, you know, [Lesnar] comes from WWE, he knows how to sell, but for MMA, he doesn’t like to get hit,” Belfort said. “And I’m telling you, I can hit him pretty hard… You’re a big man, I got you. I’m willing to fight big men, man. I’m not scared. The king of the jungle is the lion, not the elephant. So, Brock Lesnar, you’re right down my alley, my friend.”

Following the news of Lesnar’s contract with the WWE expiring, UFC president Dana White stated that if he and Jon Jones were interested in throwing down inside the Octagon, he would make the fight.

“If [Jones and Lesnar] both want to fight each other, I’m sure it’s a fight the fans want to see and it would be a good introduction for Jones into the heavyweight division. So, yeah if they both wanted to do it, I would it.”

Are you interested in seeing Vitor Belfort vs Brock Lesnar?