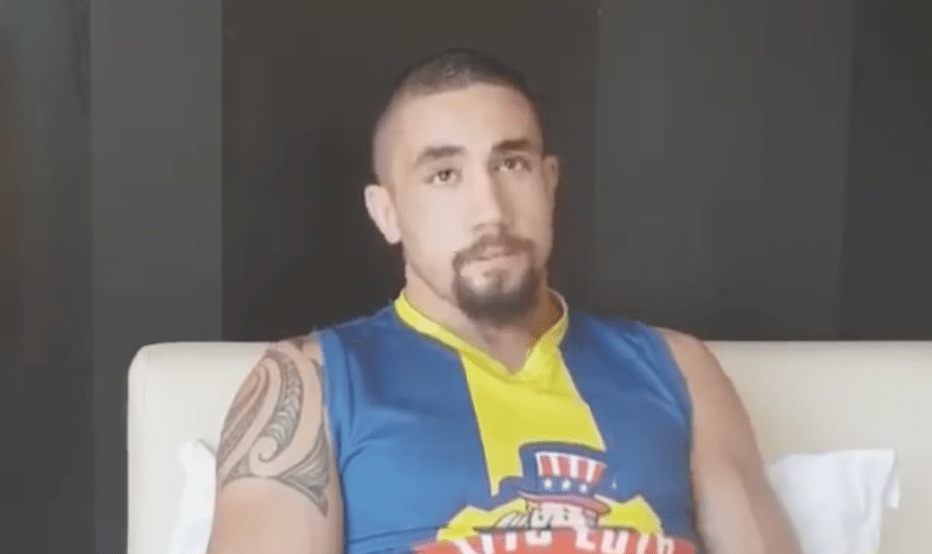 After being released from the hospital after his emergency surgery on the hernia that saw him pull out of UFC 234 at the last minute, Robert Whittaker addressed the whole unfortunate situation on his YouTube channel.

“I’m in good spirits. I’m thankful that I still have my health and that they found it before I fought and I can walk away from this and fight at a later date. My whole thing is I want to heal, train, and then fight. My health comes first. I need to make sure I’m healthy and then I’ll fight anyone, anywhere.”

Referring to Kelvin Gastelum wearing the belt at UFC 234 and announcing he was the new champion (you can watch that here), the UFC middleweight champion thought it was cute and compared it to when his kids wear his belt around the house.

“I thought it was cute. It was like, you know when your kid finds your work belt at home and then he starts wearing it around the house? That’s kind of how I saw the whole thing. It was adorable.”

When asked how he felt about Gastelum missing out on the chance to fight him for the belt, he said he had empathy for him.

“I feel bad for him that he trained and made the trip out here and then I couldn’t give it to him. I apologize for that but obviously my health comes first. But it is what it is.”

Referring to Gastelum’s own health and the staph infection that the challenger was experiencing during fight week, Whittaker thought that maybe the cancelled fight was better for both men.

“His health was looking a bit shocking as well. It’s just one of those things. Maybe it was better for both of us.”

When it comes to his own health, ‘Bobby Knuckles’ is confident that we’ll see him back in action soon.

“It’s only been nine months since my last fight. I’ll be back in there before you know it. I’m trying to get my health up to date and get back to training and then I’ll fight soon enough. I’m not looking to take any long periods of time off. Obviously I’m itching for a fight.

When it came to what the UFC should do in the middleweight division in the mean time, Whittaker said that he’s not worried and suggested what Gastelum and Israel Adesanya should do before he returns. You can read about that here.