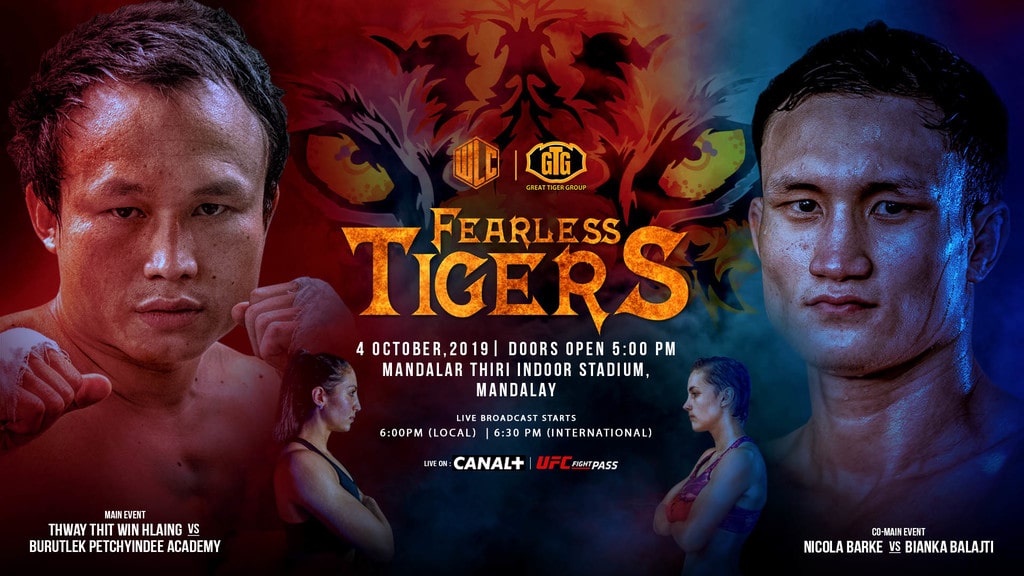 Ahead of WLC: FEARLESS TIGERS, we take an in-depth look at the fights on the card:

Thein Soe vs Soe Win Than

Thein Soe is a veteran Lethwei fighter and is diverse with mixing in all nine limbs when striking. He is effective in both orthodox and southpax stances and likes to switch it up regularly. His primary knockout weapon is his knees, which he throws with devastating power behind them.

Soe Win Than is known for his skilful Lethwei techniques. He likes to set his opponent up to be aggressive and then be aggressive with his counter after the opponent’s combo. He uses jumping knees in a creative way to close distance.

Saw Min Naing is currently touted as one of the most promising prospects in lethwei. He has a determination to keep fighting even in tough contests, a critical trait to success in lethwei. He constantly moves forward and puts pressure on his opponent with his relentless strikes. His most potent weapon is his elbow strikes.

Going into this bout, Saw Kaung Htet has a height advantage and he will look to use that to keep away from his opponent’s strikes. He also is an aggressive fighter so this should be an exciting matchup. His favourite technique is moving forward and throwing punches, low leg kicks and headbutts.

These two combatants fought once in 2017 at traditional Aung Lan (WLC: Last Man Standing) tournament final. Hein Tun Aung came out on top that time. Hein Tun Aung went viral for how he chains all his strikes with headbutts – punches, knees, elbows and headbutts. He is currently undefeated in World Lethwei Championship.

Auk Chin Lay is one of the best fighters from upper Myanmar (Mandalay region) and his Lethwei skills have made him a fan favourite in the area. He uses a lot of roundhouse kicks with both legs and has a great clinch that helps him establish his elbows and knees.

Historically, Thway Thit Maung has predominantly been known for being more of a counter striker but this year he changed his fighting style to be more aggressive and it has done well for him so far, going undefeated.

Omar is an experienced fighter and although he uses the orthodox stance, he rarely uses his left jab, preferring to set up his strikes with his right hand. He also uses his left kicks effectively, attacking all levels of his opponent’s body with that leg while his right leg is mostly for leg kicks.

Shuklaine Min is one of the best Lethwei fighters and has won titles everywhere he has gone except at World Lethwei Championship. His powerful weapons are his powerful elbows and knees.

Kun Khmer fighter Elite Peakdey is a experienced fighter who already fought over 60 matches. He is a champion in Cambodia and this will be his first fight in lethwei. He is a powerful fighter and his favourite style of fight is in the clinch and then trading knees.

Mite Yine is the most experienced fighters in the WLC ring, having gone through a roller coaster in his WLC career. The one thing that is never disputed is that everytime Mite Yine fights, it will be a contender for fight of the year. He uses punches, elbows, knees, high kicks, low kicks and headbutts, usually in that order.

Nguyen Thanh Trung is an excellent Vietnamese fighter and has really good push kicks that keeps his opponent at distance. He uses a lot of leg kicks and usually knocks his opponents down with powerful kick combinations.

Two of the brightest stars in female combat sports collide in this one. Nicola Barke is a former ballet dancer and Taekwondo champion before she decided to train in kickboxing. As expected with her ballet and taekwondo background, her kicks are her best weapon, both low and high kicks. She is also a very technical puncher and has good stamina to push the pace the entire fight.

After a decorated amateur career, Bianka Balajti is determined to get the same success on the professional stage. She is highly aggressive and her punch combinations are hungry to knock her opponent out. She has also knocked down many an opponent with her knees in the clinch.

Many fans have said that they look alike. Their fighting style proves their looks are not the only thing that seems the same. They both have a penchant for knockouts and both of them like to throw kicks after a punch combination.

Thway Thit Win Hlaing probably has the more accurate strikes, and his counter striking is a thing of beauty. Burutlek is the more powerful puncher, and can knock you out with one punch.