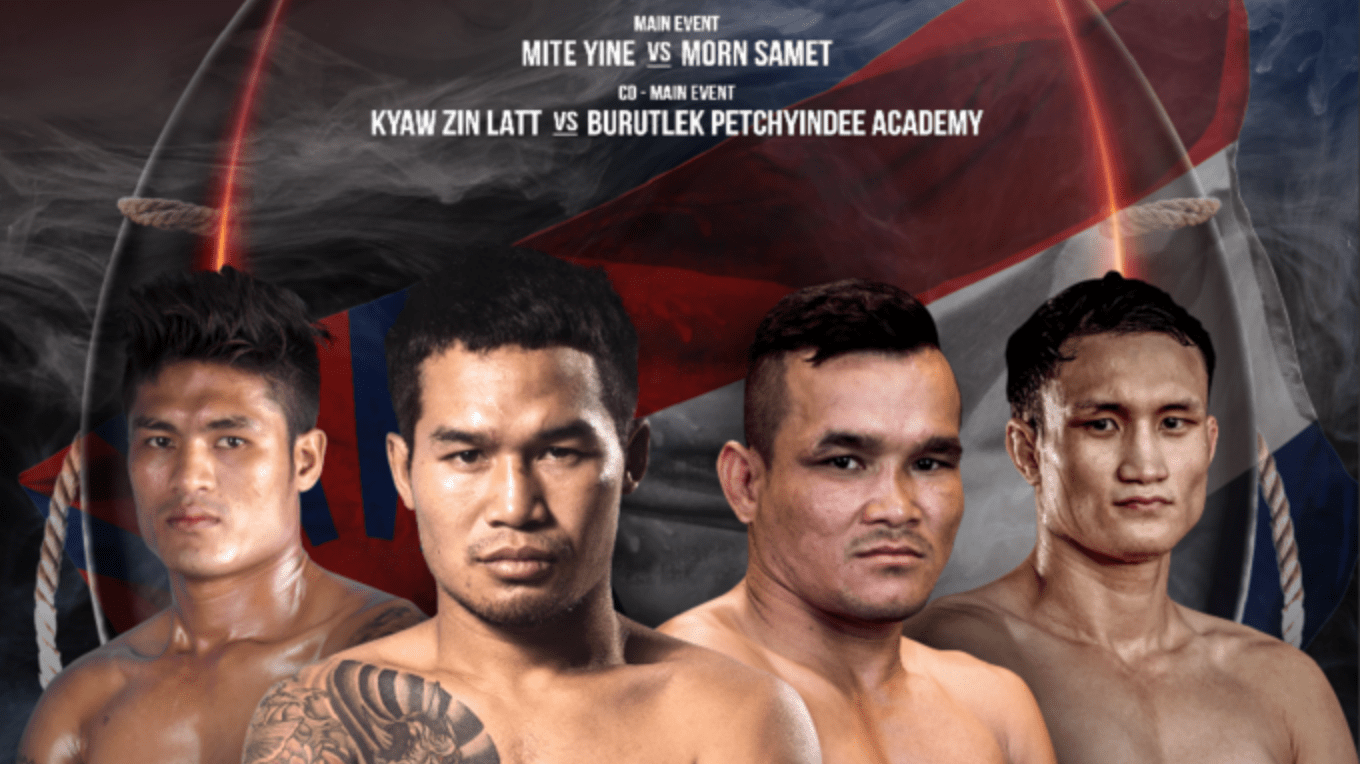 A historic event in lethwei takes place this Sunday as World Lethwei Championship hosts its first event in Kayin State, Myanmar, the cultural epicentre of the sport of lethwei. WLC: KAREN SPIRIT is held in Hpa-An, a mountainous resort town in Kayin State and will be headlined by a main event bout of featherweights Mite Yine and Morn Samet.

Even though lethwei is practiced all across Myanmar, it holds a special significance in Kayin State and Kayin people. During all major holidays like the Kayin New Year, lethwei fights provide the entertainment all night long and people from the entire state converge in one destination to enjoy fights, as they usher in the new year. Hence, the sport of lethwei is dominated by fighters from the state.

For this historic event, eight epic fights are lined up. We take a closer look at these fights.

Ba Hein is one of the most promising lethwei fighters in Myanmar and famous for his style of constantly walking forward. He has good stamina and well-prepared in all the bouts that he’s fought in. Min Htet Kyaw has been in Lethwei for many years now and his experience and skills are recognisable. He is the kind of fighter that has the power to end the fight at any second. It’s unlikely this goes to the judges decision, so expect a KO or TKO to get the night started.

Than Zaw vs Hein Tun Aung

Than Zawis a defensive-minded fighter and has a good powerful left hand. He patiently waits for his opponent’s openings and errors to make his attacks. Hein Tun Aung is known for pushing his opponents into the corner and controlling them from there. Lethwei fans consider him a real fighter of the art of 9 limbs, as he uses all available weapons during each fight. This bout will be one of the most exciting fights of WLC.

Aung Hein is famous for his determination and he never gives up easily in fights. His style is very exciting and that has won him many fans. Thway Thit Maung is a counter fighter and his smart, calculated reflexes, speed and footwork help him beat most opponents. Although he depends on defensive techniques, his movement and powerful limbs can lead to victory. This is the classic striker vs counter striker bout.

Eh Eh has a lot of combat sports background, having fought in lethwei, judo and wrestling and is now training under local hero and current ONE Championship fighter Phoe Thaw. She has excellent clinching skill and her side kicks are a wonder to see. Huynh Ha Hieu is the one of the best known female fighters from Vietnam and has already fought many times in Muay Thai, so she has an edge in experience but the lethwei rules might be interesting for her. This is one of the most evenly matched fights on the card and definitely one of the most intriguing.

Aung Aung Htoo has great timing and powerful kicks. Saw Min Min is a prodigy and is undefeated in lethwei He has perfected the skillset of the art of 9 limbs and has one of the most beautiful knees in the clinch. Both fighters are aggressive and hungry to prove they are the best and although Saw Min Min holds the advantage of having competed in major events before, like World Lethwei Championship and ONE Championship, Aung Aung Htoo will be no pushover.

Thway Thit Aung is known for powerful punches and mind-blowing headbutts. He is always hungry for victory and whenever he fights he gives 100 percent. David McCarthy is the type of fighter that does not walk backwards and will take the opportunity to knock his opponent out when he gets the chance. We can probably expect a KO in this fight.

The former Light Welterweight Champion, Kyaw Zin Latt is an artist of lethwei and took the chance to step up on short notice to take on Burutlek PetchyindeeAcademy. Kyaw Zin Latt made history by winning the first 4-man tournament in World Lethwei Championship to become Light Welterweight Myanmar National Champion. Burutlekis a German-Thai striker who is powerful but has also honed his technical skills at the famed PetchyindeeAcademy in Bangkok, Thailand, a gym that has produced some of the combat world’s most famous champions.

In the main event, we will see an epic clash of two of the world’s best fighters at 57kg. Mite Yine is already considered one of the best fighters in the sport and he is immensely popular. He fights like this is a video game and will take a shot to land one. He has been honoured with “fight of the year’ at WLC for two years straight and wants to keep that streak going. For any fan looking to understand the greatness of lethwei, all you have to do is pull up old videos of Mite Yine.

His opponent is known as the king of elbows in his native Cambodia. Morn Samet is super aggressive and fights like someone owes him money. Combining these two combustible athletes almost guarantees a classic in the making.