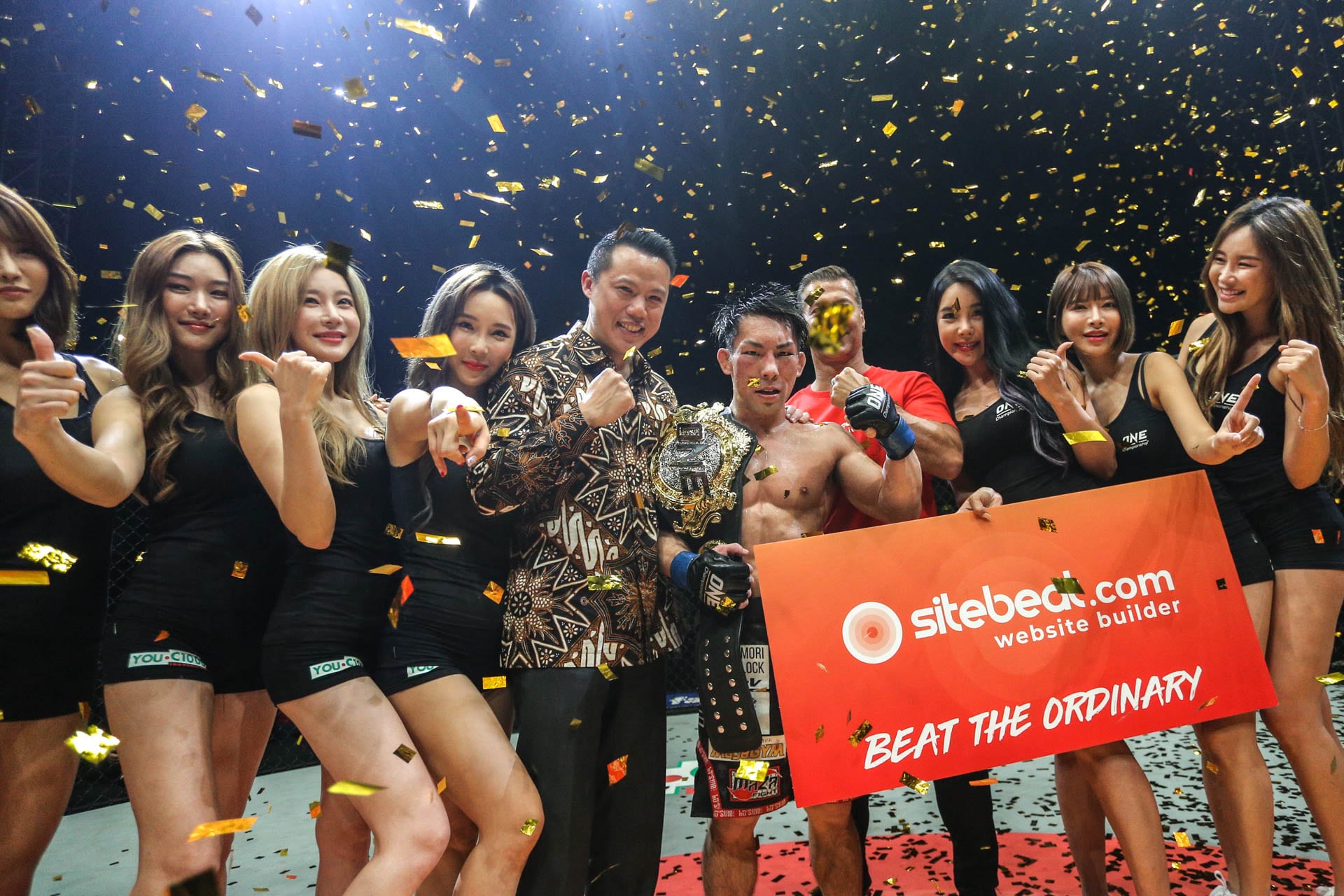 ONE Championship electrified the Istora Senayan once again last Saturday night, 19 January at ONE: ETERNAL GLORY. The first ONE Championship live event in 2019 kicked the year off in style, as the absolute best in local and international martial arts talent took center stage. In the main event, Japan’s Yosuke “Tobizaru” Saruta was crowned the new ONE Strawweight World Champion with a split decision victory over the Philippines’ Joshua “The Passion” Pacio.

Japanese martial arts veteran Yosuke “Tobizaru” Saruta put together a tremendous performance, scoring a monumental upset of now former champion Joshua “The Passion” Pacio of the Philippines to capture the ONE Strawweight World Championship. Saruta was relentless with his chain wrestling, taking Pacio down on numerous occasions while trading powerful combinations on the feet. Throughout five action-packed rounds, both Saruta and Pacio put forth their best effort. In the end, it was Saruta who was able to garner two of the three judges’ nods to win by split decision.

In a ONE Super Series Muay Thai contest, Thailand’s Mongkolpetch Petchyindee Academy and New Zealand’s Alexi Serepisos put together an inspiring battle between world-class strikers. Over the course of three back-and-forth rounds, it was Mongkolpetch who proved to be faster and stronger, constantly a step ahead of his opponent throughout the contest. In the end, all three judges scored the bout in favor of Mongkolpetch to win by unanimous decision.

Singapore’s Christian “The Warrior” Lee turned in a dominant performance over the Philippines’ Edward “The Ferocious” Kelly, finishing the Filipino Team Lakay veteran in the first round with punches. After a brief exchange on the feet, Lee took matters to the ground and worked himself into full mount. From top, Lee pounded Kelly with downward strikes until the referee called a halt to the contest.

English Muay Thai champion Jonathan “The General” Haggerty was impressive in his ONE Super Series debut as he outstruck Italy’s Joseph “The Hurricane” Lasiri to earn a unanimous decision win in a Muay Thai contest. Haggerty was on point in the opening round, unloading a storm of thunderous kicks and pinpoint-accurate elbows on his Italian opponent. Lasiri rallied back in the second round, connecting on an early knee, but it was Haggerty who was accurate all throughout the bout. After three rounds of back-and-forth action, it was Haggerty who was declared the victor.

Filipino striker Robin “D’ Ilonggo” Catalan put on an all-around dominant performance, shutting down Indonesian grappler Stefer “The Lion” Rahardian en route to a unanimous decision victory. Catalan was a step ahead on all fronts, as he easily prevented Rahardian’s takedowns, while also picking the hometown favorite apart in the striking department and landing some takedowns of his own. After three rounds of action, it was Catalan who walked away with the win on all three of the judges’ scorecards.

Brazilian Jiu-Jitsu World Champion Bruno “Puccibull” Pucci of Brazil earned the biggest victory of his career thus far, submitting former ONE Lightweight World Champion Kotetsu “No Face” Boku of Japan in the first round of their featherweight clash. Pucci was relentless in his pursuit of the takedown, pushing Boku to the fence until finally putting the Japanese veteran on his back. Once on the ground, Pucci put on a grappling clinic, dominating Boku before sinking in a deep rear-naked choke to force the tap.

South Korea’s Kwon “Pretty Boy” Won Il kept his undefeated record intact after scoring a stunning first-round TKO victory over the streaking Anthony “The Archangel” Engelen of The Netherlands. The rangier Kwon pushed the action and utilized his reach advantage to land a well-timed right jab that stunned and dropped Engelen early in the opening round. Kwon pounced on the grounded Engelen and put on the finishing touches to end the bout after just 67 seconds.

Former ONE World Title challenger Koji “The Commander” Ando triumphed with a dominant performance against Rasul Yakhyaev. Ando showcased his pinpoint striking early on, setting up his jabs to land his stinging left straights. Yakhyaev gamely traded strikes with the Japanese veteran, but it didn’t deter Ando from consistently connecting on his combinations. After three grueling rounds, two of three judges saw the bout in favor of Ando, winning by way of hard-earned split decision.

China’s Niu Kang Kang left a lasting impression in his ONE Championship debut, knocking out hometown hero “The Terminator” Sunoto in the first round. Niu only needed 31 seconds to get the job done, shutting the lights off on Sunoto with a thunderous high kick.

Indonesia’s Aziz “The Krauser” Calim made quick work of compatriot Adi “Zenwalk” Paryanto in a strawweight contest. Calim effortlessly imposed his will on his opponent, scoring a takedown and latching himself on Paryanto’s back. With seconds remaining in the first round, Calim went for the finish, fastening a deep rear-naked choke to force Paryanto to tap.

Setting the tone for an action-packed evening was a featherweight bout between Indonesian martial artists Oscar Yaqut and Andreas “Yhayaz” Satyawan. Yaqut, a National Sanda Gold Medalist, did not disappoint in his promotional debut, rattling Satyawan with a combination of solid strikes from the start. In the second round, Yaqut completed the technical knockout victory with a series of powerful blows.

Official results for ONE: ETERNAL GLORY