Zebaztian Kadestam Defends Welterweight Title At ONE: Reign Of Valor 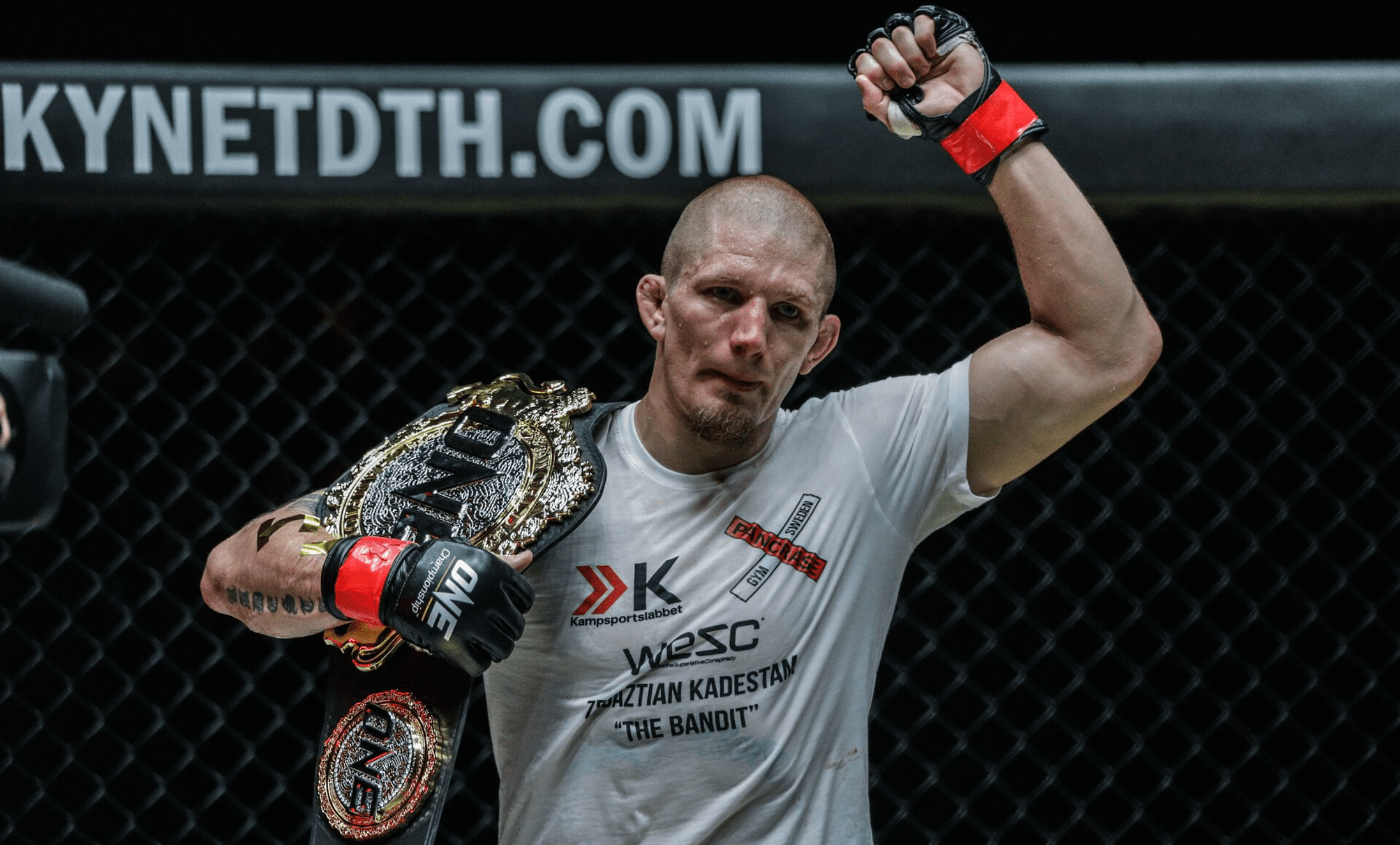 ONE Championship put on a tremendous show at the Thuwunna Indoor Stadium in Yangon. ONE: REIGN OF VALOR played host to a world-class display of martial arts action. Once again, the absolute best in local and international martial arts talent took to the ONE Championship cage to showcase their incredible skills. In the main event, Zebaztian Kadestam retained his ONE Welterweight World Title with a stunning stoppage victory over Georgiy Kichigin.

In the main event, Sweden’s Zebaztian “The Bandit” Kadestam showed championship heart by defeating Kazakhstan’s Georgiy “Knight” Kichigin via technical knockout to retain the ONE Welterweight World Championship. For the better part of the first two rounds, Kadestam was on the wrong end of a grappling clinic from Kichigin, as he was getting taken down and controlled on the ground. In the dying minutes of the second round however, Kadestam landed a thunderous elbow in the clinch that had the challenger dazed at the end of the round. Visibly still hurt from the elbow, Kichigin was unable to answer the third round bell and the victory was awarded to Kadestam.

Myanmar’s own Phoe “Bushido” Thaw overcame a troublesome start to score an exciting technical knockout win over Indonesia’s Yohan “The Ice Man” Mulia Legowo. Phoe Thaw found himself in some precarious situations early, but managed to escape from mount and a number of submission attempts. Momentum shifted in favor of the hometown favorite, as Phoe Thaw gained dominant position and punished Legowo with thunderous punches to earn the stoppage win late in the opening round.

Former ONE World Title challenger Mauro “The Hammer” Cerilli of Italy made quick work of opponent Alain “The Panther” Ngalani of Hong Kong to win via first-round technical knockout. At the sound of the opening bell, the two warriors met each other head-on at the center of the ONE cage. Cerilli quickly secured underhooks against the fence and then executed an overhead slam, sapping the energy from Ngalani. From the reverse headlock position, Cerilli then delivered a symphony of knees to force the referee to call a halt to the contest.

Top-ranked Indian mixed martial arts star Gurdarshan “Saint Lion” Mangat made a statement in his ONE Championship debut, defeating former ONE World Title challenger Toni “Dynamite” Tauru of Finland by knockout. Mangat and Tauru went strike-for-strike in the first two rounds, making for an exciting back-and-forth contest. In the final round, Mangat went for the finish, as he dropped Tauru with a swift left hook before finishing things off with a jumping knee and some ground-and-pound.

Muay Thai legend Petchmorakot Petchyindee Academy of Thailand turned in a spectacular performance, dominating opponent Kenta Yamada of Japan in a ONE Super Series Kickboxing bout. For three full rounds, Petchmorakot unloaded a bevy of powerful striking combinations, which featured a torrent of left high kicks and straight punches. Yamada played defense for the majority of the contest. In the end, all three judges scored the bout in favor of Petchmorakot to win by unanimous decision.

Four-time Chin State Wrestling Champion Tial “The Dragon Leg” Thang of Myanmar was dominant in his mixed martial arts debut as he outpointed Rin Saroth of Cambodia to score a unanimous decision victory. Tial Thang put on a show in front of his home country as he dictated the pace in the striking department and showed off his elite-level grappling with a number of masterful takedowns. After three exciting rounds, Tial Thang was declared the winner in front of a raucous crowd in Yangon.

Striking superstars Liam Nolan of England and Enriko “The Hurricane” Kehl of Germany made their ONE Super Series debuts in a fiery Kickboxing contest. The two martial artists traded their best strikes for the majority of the bout right at the center of the ONE cage. In the second round, Kehl connected on a thudding body shot to force Nolan to take a knee. After action resumed, Kehl put the finishing touches with a fierce combination against the cage. Nolan failed to beat the 10 count and Kehl was awarded the knockout victory.

In an exciting ONE Super Series Kickboxing contest, light heavyweight behemoths Andrei Stoica of Romania and Tarik Khbabez of Morocco went back and forth, trading powerful striking combinations from the sound of the opening bell. For three full rounds, both Stoica and Khbabez stood right in the pocket, exchanging their biggest shots, but it was Khbabez who landed with more power and frequency. In the end, all three judges scored in favor of Khbabez to win by unanimous decision.

“MMA Sister” Lin Heqin of China was spectacular in her ONE Championship debut as she submitted Filipina star Jomary “The Zamboanginian Fighter” Torres in the first round. The rangey Lin imposed her will in striking early but found herself getting taken down late in the first round. The takedown proved to be detrimental for Torres however, as Lin locked in a deep triangle choke that left the Filipina with no alternative but to tap out.

“The Ghost” Chen Rui of China remained undefeated in his professional mixed martial arts career after defeating Guam’s Roman “Boom” Alvarez via technical knockout in just two rounds. Chen and Alvarez put on a striking battle in the first round as the two traded combinations in the exciting first five minutes of action. Chen dropped Alvarez with a well-placed uppercut to the head midway through the second round and followed up with a storm of punches to claim the stoppage victory.

Female atomweight competitors Bozhena “Toto” Antoniyar of Myanmar and Audreylaura “Ice Comet” Boniface of Malaysia figured in a thrilling two-round encounter. Hometown hero Antoniyar put together an electric performance to the delight of the packed Thuwunna Indoor Stadium crowd, lighting up Boniface with a plethora of dynamic striking combinations. In the second round, Boniface succumbed to the constant pressure as Antoniyar claimed the technical knockout victory due to strikes.

Flyweight competitors Rui Botelho of Portugal and Yuta Watanabe of Japan figured in a spirited ONE Super Series Kickboxing contest. Watanabe utilized his length to keep Botelho constantly out of range in the early going. Botelho battled back late, scoring big on a pair of knockdowns in the third round. In the end, all three judges scored in favor of Botelho to win by unanimous decision.

Kicking off the action at ONE: REIGN OF VALOR was a ONE Super Series Kickboxing contest between Kohei “Momotaro” Kodera of Japan and Kenny “The Pitbull” Tse of Australia. Kodera, a karate black belt, was the sharper of the two athletes and was constantly a step ahead of his opponent for three full rounds. At the end of the contest, all three judges scored in favor of Kodera to win by unanimous decision.

You can see the full results here: