Zhang Weili Opens Up On UFC 261 Loss To Rose Namajunas 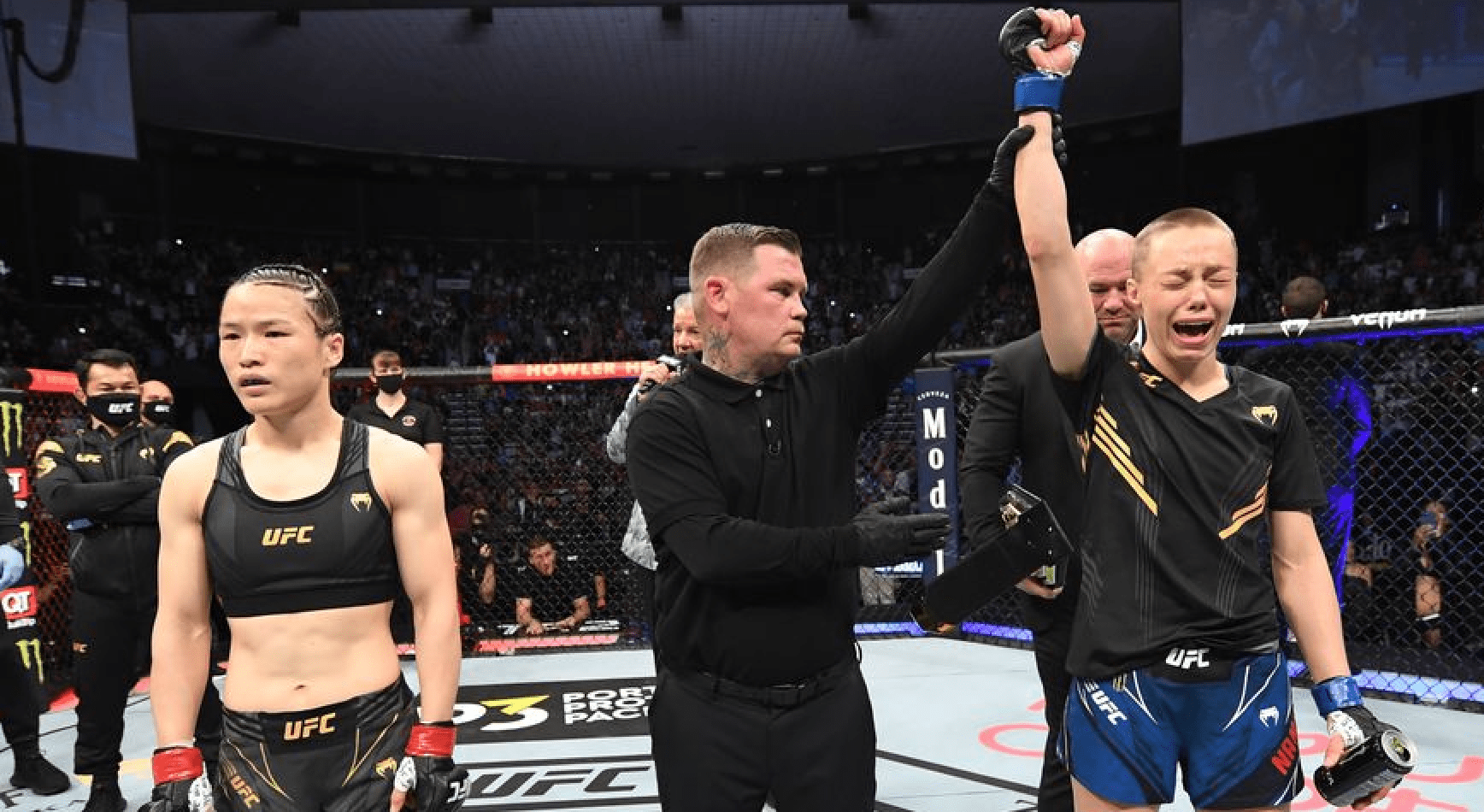 Zhang Weili lost her strawweight title to Rose Namajunas at UFC 261, when she was rocked by a perfectly-timed high-kick, followed by a barrage of punches, leading to the stoppage early in the first round.

In her first media appearance since the loss (as transcribed by MMA Mania), Zhang explained why she was upset at the referee for stopping the fight.

“Regarding the stoppage, when the referee pulled me away, I really couldn’t accept the fact,” Zhang said. “I was not reconciled at all. I worked hard for a long time, and I trained very hard every day. And I brought a big team of mine to America, yet the match ended this early. Deep inside, I couldn’t accept this fact.

“It’s because I put in so much effort to prepare for this fight, and it was very tough for me every day. But because of one misjudgment that I made, I thought she was doing a low-kick, and I had a defence for the low kick, but she made a high-kick instead. And it was very sudden, very quick. And it’s not like we went for three rounds and she overpowered me, or even after one round if she overpowered me and I lost, then I would admit that my skills weren’t as good. But this one is really, you know. I didn’t have a chance to show what I’ve got. So I felt wronged.”

‘Magnum’ is waiting on an immediate rematch with Namajunas in a neutral location, such as Abu Dhabi. But she understands that she no longer has the power to make that call.

“We are also waiting for the second fight,” Zhang said. “Depends on the schedule. Ideally, we would like it to be held in Abu Dhabi. This location is neutral to both parties. But, now Rose is the champion, so it might not be up to us. The table has been turned.”

UFC 261 took place in a packed VyStar Veterans Memorial Arena in Jacksonville, Florida. Being the outsider, Zhang was subjected to non-stop jeers from the crowd, which she said had a major impact on her performance.

“Last fight with Joanna [Jedrzejczyk], even though she trained in America, she isn’t American,” Zhang explained. “So we were quite equal, and neither of us got any boos. But this time, because Rose is from America, and Florida is a bit like that.. So when I showed up in the event… wow the boos were really loud. It was my first time experiencing the situation. And I didn’t expect it to be so serious.

“Even if she had 70 percent of the audience on her side, and just a small amount on my side, it wouldn’t have been that loud. When my music started playing even before I showed up, it was already loud. And so I couldn’t even hear what the referee or coach said.”

While it may seem like an excuse to many, Zhang emphasised that she was merely recalling the the fight from her perspective.

“I want to emphasise that we are not making any excuses [regarding the loss],” Zhang said. “We accept the result. I am talking about the boos, the location, and the uncertainty of who I’ll face, not because I am making excuses for my loss. We are just discussing the problems encountered. So if people think I am making excuses, that’s not the case.”

Coach Cai Xuejun then jumped into the conversation and reiterated Zhang’s comments.

“I think Weili performed quite well in the beginning,” Cai said. “There was a huge psychological disadvantage fighting amongst a hostile crowd, so Weili wanted to relax more and be less nervous. But when she tried, she didn’t relax. Instead, she lost focus. So at that moment, she was actually not fully there. So I would say Weili wasn’t focused enough. We wanted her to be in her vacuum of focus from the moment of her entrance. But we let the boos overwhelm us.”

“Rose, She Is Very Smart”

Before the fight, Zhang had said that she would like to be friends with Namajunas. But the former champion doesn’t feel like that will happen any time soon.

“I don’t want to comment on Rose,” Zhang said. “I wanted to touch gloves with her in the fight, but she didn’t do it. So I think … I wanted to make friends through MMA, but the other person doesn’t think like that. So oh well. Joanna, I think Joanna is quite cute. She is good. She is cute. She makes things clear and not tries to hide anything. But Rose, she is smart. Very smart.”

Do you think Zhang Weili deserves an immediate rematch against Rose Namajunas?