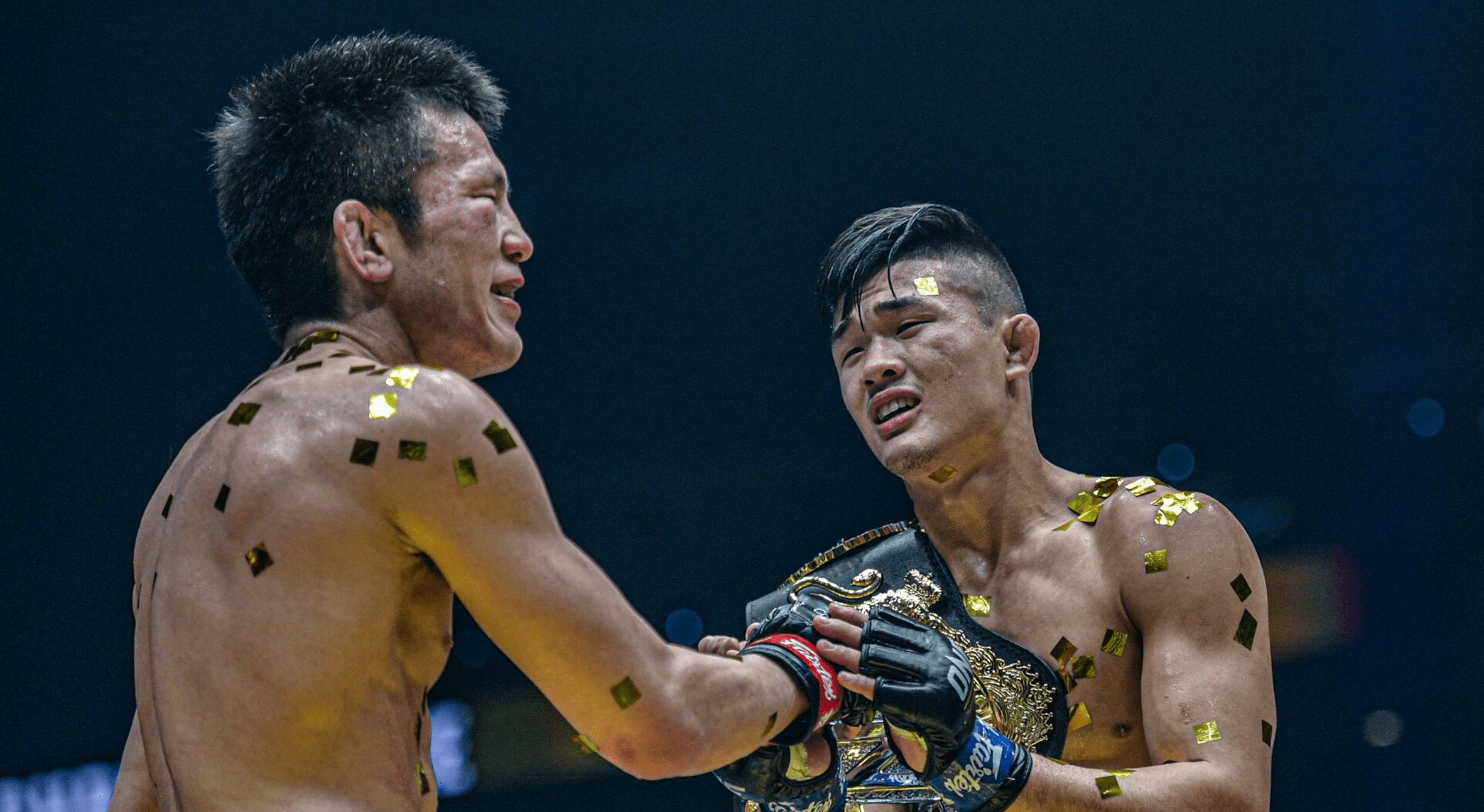 ONE Championship put on another exciting night of martial arts action at the Singapore Indoor Stadium. ONE: ENTER THE DRAGON featured a number of unforgettable and compelling contests to the delight of the crowd. In the main event, Christian “The Warrior” Lee of Singapore captured the ONE Lightweight World Championship with a stunning technical knockout victory over Shinya “Tobikan Judan” Aoki of Japan, becoming the youngest male mixed martial arts World Champion in history. In the co-main event, Regian “The Immortal” Eersel of The Netherlands was crowned the inaugural ONE Lightweight Kickboxing World Champion with a unanimous decision victory over countryman Nieky “The Natural” Holzken.

Hometown hero Christian “The Warrior” Lee of Singapore brought the house down with a stunning technical knockout victory over Japanese legend Shinya “Tobikan Judan” Aoki to become the new ONE Lightweight World Champion. Aoki imposed his will in the opening round, taking Lee down with relative ease and threatened with a deep armbar submission attempt, but the hometown favorite was able to survive. In the second round, Lee took over as he unloaded a blistering combination of punches to put Aoki down and out to realize his dream of becoming a ONE World Champion.

In the co-main event of the evening, Regian “The Immortal” Eersel of The Netherlands edged out fellow Dutchman Nieky “The Natural” Holzken to win by unanimous decision, capturing the inaugural ONE Lightweight Kickboxing World Championship. Eersel and Holzken put on an entertaining display of elite-level striking for the duration of the five-round bout. Eersel’s length and reach proved to be a factor however, as he was able to punish Holzken with jabs and knees in the latter part of the bout, which was enough to earn the nod on all three of the judges’ scorecards.

Muay Thai superstar Petchmorakot Petchyindee Academy of Thailand added perhaps the biggest win on his resumé with a split decision over kickboxing icon Giorgio “The Doctor” Petrosyan of Italy to advance into the ONE Featherweight Kickboxing World Grand Prix Semi-finals. Petrosyan looked to be in control in the opening round, making use of his superb boxing skills to outpoint his Thai counterpart. Petchmorakot started to find his groove in the second round as he made things more competitive, trading shots with Petrosyan. After an intense three-round bout, it was Petchmorakot who walked away with the razor-thin verdict.

France’s Samy “AK47” Sana advances into the semi-finals of the ONE Featherweight Kickboxing World Grand Prix after scoring a unanimous decision win over “The Boxing Computer” Yodsanklai IWE Fairtex of Thailand. Sana was aggressive early, as he had Yodsanklai in some trouble in the opening round. The Thai legend bounced back in the second round, putting together better combinations and getting some good shots in on the taller Sana. It was a back-and-forth affair in the final round, but after 15 minutes of fast-paced action, it was Sana who was awarded the decision victory.

Multiple-time Muay Thai and kickboxing World Champion Cosmo “Good Boy” Alexandre of Brazil made quick work of the debuting “Super” Sage Northcutt of the United States with a jaw-dropping one-punch knockout win. Alexandre made good on the first big punch he landed, blasting Northcutt with a massive overhand right hook that put the American out on his feet. The Brazilian striker landed one more left hook to finish Northcutt off in just 29 seconds.

Turkey’s Saygid “Dagi” Guseyn Arslanaliev stormed into the ONE Lightweight World Grand Prix Finals in spectacular fashion with a first round knockout of Singapore’s Amir Khan. Arslanaliev showcased his world-class grappling early in the bout by controlling Khan on the mat. The Turkish knockout artist found his mark later on, connecting on a pair of uppercuts after a scramble that separated Khan from his senses. Arslanaliev landed a few more punches before the referee stepped in to stop the bout.

Former ONE Flyweight World Champion Geje “Gravity” Eustaquio of the Philippines returned to winning form with a unanimous decision win over South Korean newcomer Kim Kyu Sung to earn a spot as an alternate in the ONE Flyweight World Grand Prix. The smaller Filipino used his superior striking and impeccable head movement to outpoint Kim in the first two rounds. Kim tried to rally back in the final round, but his comeback came a little too late, as Eustaquio was awarded the decision win after three rounds.

Chinese strawweight Miao Li Tao remained unbeaten in ONE Championship after scoring a highlight reel-knockout win over former ONE Strawweight World Champion Dejdamrong Sor Amnuaysirichoke of Thailand. Miao shot in for a takedown early and was dominant on the mat as he tried to end the bout with a submission. The former World Champion Dejdamrong managed to survive however and lured Miao into a striking exchange. Miao got the better of the Thai legend, connecting on a left hook that immediately put Dejdamrong to sleep late in the first round for the spectacular victory.

Thailand’s Smokin’ Jo Nattawut punched his ticket to the ONE Featherweight Kickboxing World Grand Prix Semi-finals with a third-round technical knockout victory over Sasha Moisa of Ukraine. Nattawut overcame a distinct size advantage as he punished Moisa with an array of kicks to the legs and to the body. In the final round, Nattawut turned up the intensity as he overwhelmed his opponent, dropping Moisa twice before finally getting the exciting stoppage win.

In a trilogy bout between former ONE Strawweight World Champions, Japan’s Yoshitaka “Nobita” Naitoedged out Brazilian Alex “Little Rock” Silva by unanimous decision. The two-time ONE World Champion Naito was relentless in his attack as he grounded Silva at will, taking the Brazilian grappler down and keeping him down for the majority of the 15-minute bout. After three rounds of action, Naito walked away with the clear-cut decision win to defeat Silva twice in their three matches.

Multiple-time Brazilian Jiu-Jitsu World Champion Garry “The Lion Killer” Tonon of the United States needed just under a minute to submit Japan’s Yoshiki Nakahara in their lightweight contest. Tonon flashed signs of his continuously-improving striking game before ultimately targeting Nakahara’s leg for a submission attempt. Tonon changed levels and dove in for Nakahara’s leg as he secured a heel hook and forced the Japanese judoka to tap out in just 55 seconds.

Russian kickboxing World Champion Dzhabar “Genghis Khan” Askerov was the first to advance into the semi-finals of the ONE Featherweight Kickboxing World Grand Prix after earning a unanimous decision win over Germany’s Enriko “The Hurricane” Kehl. The powerful Askerov picked Kehl apart with crisp combinations and thunderous kicks throughout the three-round bout. In the end, it was Askerov who was hailed the winner by all three judges.

In a battle of former ONE World Title challengers, Japanese women’s mixed martial arts superstar Mei “V.V.” Yamaguchi put on a masterful display of grappling to submit Laura “La Gladiadora” Balin of Argentina in the first round. Yamaguchi wasted little time in taking Balin down and patiently worked her way into an arm-triangle choke. Balin managed to survive, but merely prolonged the inevitable, as Yamaguchi immediately transitioned into an armbar for the submission victory.

Undefeated lightweight Iuri Lapicus of Moldova made a strong statement in his ONE Championship debut, overwhelming Thailand’s Shannon “OneShin” Wiratchai en route to a third round submission win. Lapicus showed off his high-level grappling early as he grounded Wiratchai in the first two rounds of action. Wiratchai started the final round strong, but Lapicus managed to bring the Thai down and transitioned into mount. From there, Lapicus punished Wiratchai with elbows and punches from the top, before locking in a rear naked choke for the remarkable win.

Multiple-time World Champion Daniel “The Rock” Dawson of Australia earned a spot as an alternate in the ONE Featherweight Kickboxing World Grand Prix with a split decision win over Brown Pinas of The Netherlands. Dawson was aggressive from the opening bell, pummeling Pinas with a barrage of powerful punches and kicks. Pinas kept things competitive by using his reach to score points and keep Dawson at bay. After three rounds of action, Dawson was declared the winner on two of the three judges’ scorecards.

Kicking the action off at ONE: ENTER THE DRAGON was India’s Rahul “The Kerala Krusher” Raju who picked up an impressive submission win over Filipino striker Richard “Notorious” Corminal in the first round of their opening lightweight bout. Raju utilized his range to outstrike Corminal but ended up getting tagged and dropped by the Filipino late in the opening round. Raju quickly recovered and took his Filipino opponent down before transitioning into a rear naked choke and forcing the tap.


You can also watch the full highlights from ONE: Enter The Dragon, here.