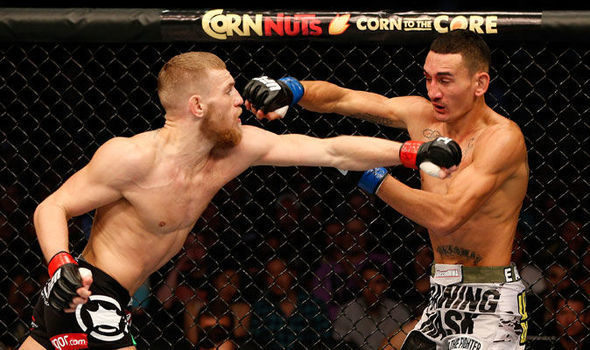 Firas Zahabi knows a thing or two about putting a winning game plan. The Tristar Gym Head Coach is one of the most respected coached in MMA.

On a recent session of Ask Me Anything (as transcribed by Bloody Elbow), the long time coach of Georges St-Pierre was asked how he thought Max Holloway would do against Conor McGregor today. The two fought in August of 2013, where McGregor won by decision.

Since then, ‘The Notorious’ has fought nine times, winning seven times. And in doing so, winning the UFC featherweight and lightweight belts. ‘Blessed’ on the other hand remained at 145lbs and has won thirteen straight fights and is the defending featherweight champion.

With talk of Holloway moving up to lightweight, talk started on a possible rematch between the two. And if the two were to rematch, Zahabi would back Holloway to get the win.

“If I had to pick Max Holloway vs. McGregor today, I would pick Max Holloway. I think Holloway has grown leaps and bounds since then. In my opinion, Holloway would outpunch him, outwork him. He would do very much what Diaz did, but more. I think McGregor got away with a lot of stuff, like the leg kicks against Diaz, but I don’t think he’ll have that against Holloway.

“Holloway has the same type of output as Diaz, the same kind of chin as Diaz. He’s more athletic than Diaz, he has more variety in his attacks, he has more kicking, kneeing and elbowing, and his chin is just phenomenal. So I really think he would take it in the later rounds. I think the blueprint for beating McGregor is more well understood by the roster.

“There’ll be a lot of striking of course, but there’s going to be a lot of clinching. I think that early in the striking McGregor wins, but later, it shifts all the way to Holloway. He’s got better conditioning, better durability. The grappling is gonna be on Holloway’s side, the clinch work, the knees, the elbows, the tie ups. I think Holloway will start outworking and will outpace him to the point where McGregor is going to slow down.

How do you think a rematch would go?