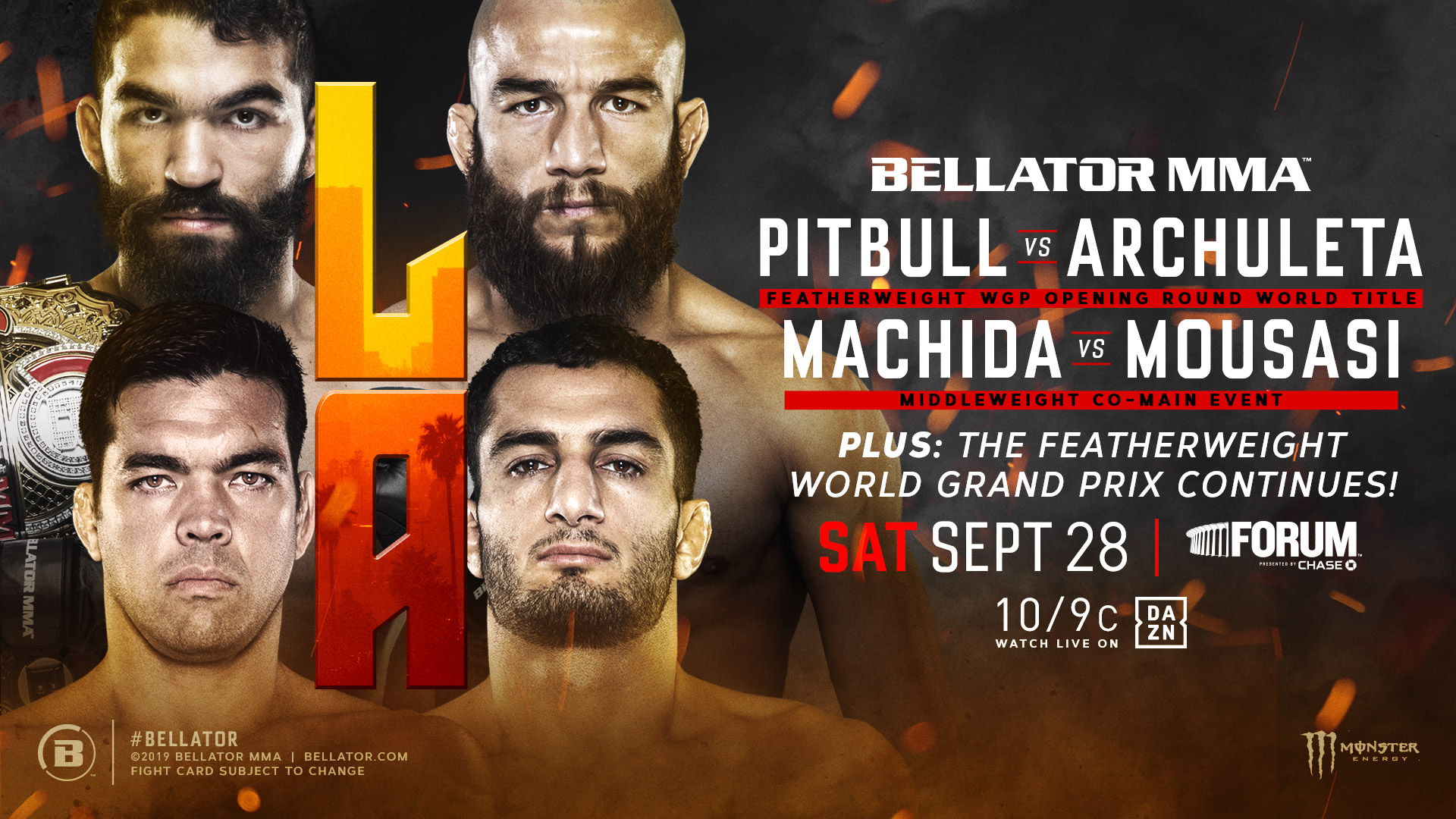 Bellator MMA returns to Los Angeles on September 28, with the promotion bringing middleweight super-fight between Lyoto Machida and Gegard Mousasi. “Moose” lost his Bellator Middleweight Championship in his last fight to Rafael Lovato Jr., and while people expected the two to have a rematch, he will instead face former UFC Light Heavyweight Champion Lyoto Machida.

“Champ-champ” Patricio Freire will also defend his featherweight title on the same card, as he takes on Juan Archuleta, the promotion announced via press release.

The opening round of the Bellator Featherweight World Grand Prix will see Bellator’s two-division champion Patricio “Pitbull”(29-4) defend his 145-pound title against Juan Archuleta (23-1) in the main event of Bellator 228 on Saturday, September 28 at the “Fabulous” Forum in Inglewood, Calif.

In addition, a battle between two of the sport’s most prolific middleweights will also take place, as Lyoto Machida (26-8) looks to improve to 2-0 against former Bellator 185-pound champion, Gegard Mousasi (45-7-2). Additional bouts will be announced in the coming weeks.

Bellator 228: Pitbull vs. Archuleta will stream live exclusively on DAZN at 10 p.m. ET/7 p.m. PT, while preliminary action will stream on Bellator.com, DAZN and globally on theBellator Mobile App.

Hailing from Natal, Rio Grande do Norte, Brazil, two-time featherweight champ Patricio “Pitbull” will enter the Bellator cage for a promotional record 22th time on September 28. With impressive wins to his name over Daniel Straus (x3), Daniel Weichel (x2) and Pat Curran, the 32-year old returns to featherweight fresh off his lightweight championship win over Michael Chandler in May. Having earned a finish in 21 of his 29 wins as a professional, the simultaneous two-division champion has become synonymous with excitement and fans can certainly expect more fireworks when he meets Juan Archuleta in LA.

A winner of 18 consecutive fights, including five under the Bellator banner and a highlight reel-knockout over former champ Eduardo Dantas at Bellator 222, Juan Archuleta has solidified himself as the rightful No. 1 contender to “Pitbull’s” title. “The Spaniard” was a standout collegiate wrestler at Purdue University before turning pro in MMA and going on to win championships in four different divisions on the regional scene. Training alongside fighters the likes of “Rampage” Jackson, Cheick Kongo, Cub Swanson and T.J. Dillashaw at HBUTC in Huntington Beach, Calif., the 31-year-old old Southern California native now looks to add Bellator gold to his trophy case with a win on September 28.

On September 28, Gegard Mousasi will look to even the score with Machida a little more than five years after they met previously in Brazil. On that night, Machida took home the decision, but Mousasi now has revenge on his mind. Training out of The Netherlands, Mousasi holds one of the most impressive resumes in all of the sport, having held the Bellator middleweight title, the Strikeforce light heavyweight title and both the Dream light heavyweight and middleweight titles. With victories against some of the sport’s best, including Rory MacDonald, Alexander Shlemenko, Chris Weidman, Vitor Belfort, Uriah Hall, Dan Henderson, “Jacare” Souza, Mark Hunt and Ovince Saint Preux, the Judo black belt is looking to earn his way back to the belt.