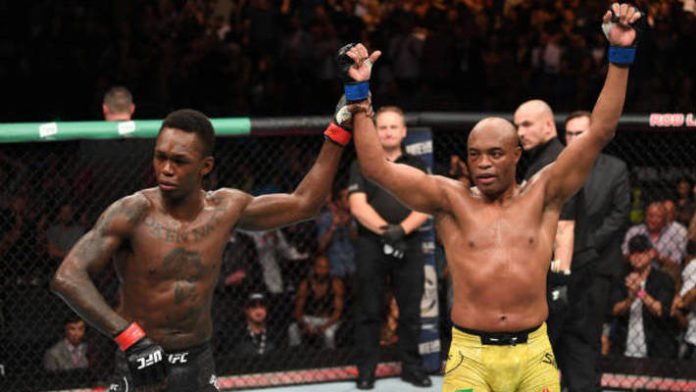 It went from a friendly call out from Jon Jones, implying that he and Israel Adesanya will meet one day, to a vicious war of words in no time at all. Since UFC 236, things have got very heated between Jones and Adesanya.

In case you’ve missed any of the back and forth between the UFC light heavyweight champion and the UFC interim middleweight champion, you can catch up with it heated exchange here.

Now Anderson Silva has had his say on the feud between the two. Saying that although the war of words may be good business for the UFC President Dana White, and the UFC, it shows a lack of respect from Adesanya to Jones. As he told media in Brazil (as transcribed by MMA Junkie).

“The way I see it, as an athlete, he disrespected Jon Jones. I think for the business, for Dana, it’s great. It’s great business for the UFC. Regardless of whether they fight or not, the UFC wins, and the fans. But there is a lack of respect. I think he crossed the line a bit.

“With time, he’ll learn how to deal with those things. I think he has to respect everything Jon Jones has done. It’s two great fighters. In the future, who knows, they might fight. But I’m from a time when you have honour. You respect everyone’s space. And that’s my opinion.

“That’s my personal opinion because Israel is young and Jon Jones has a great story for a long time in this sport. I think Adesanya needs to respect Jon Jones. But for the business, it’s good for Dana.

“I respect all fighters, especially Jon Jones. Jon Jones is my young brother and I don’t have a problem talking about Jon Jones. He’s the best fighter in the world.”

The interesting thing is, Silva doesn’t say he feels disrespected himself. The argument escalated between ‘Bones’ and ‘The Last Stylebender’, when the Nigerian Kiwi said “I already killed one GOAT, I’m hunting the next.”

Although in his last tweet on the subject, Jones tweeted “I won’t even reply to his response”, you can expect that this beef isn’t going away.

Jones is due to defend his UFC light heavyweight title against Thiago Santos at UFC 239, in Las Vegas on July 6th.

Adesanya doesn’t have a date for his next fight yet but he will face the UFC middleweight champion Robert Whittaker, later in the year, when the two will unify the middleweight title. Dana has confirmed that this will be in a stadium in Australia, around September time.