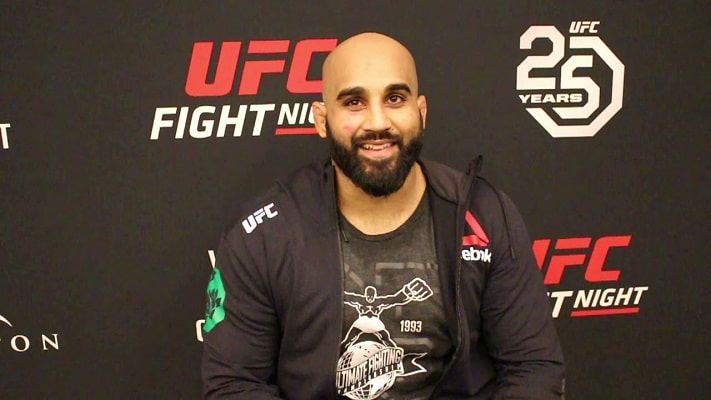 We’re less than one week away from Arjan Bhullar’s ONE Championship debut. Almost a month to the day after signing with ONE, Bhullar will face Italy’s Mauro Cerilli at ONE: Dawn Of Heroes.

Ahead of the heavyweight clash, the former UFC athlete told ONE Championship that he is excited to make his debut in the promotion.

The new contract with ONE not only gives Bhullar the opportunity of becoming the heavyweight world champion, it allows him to help grow the sport of mixed martial arts in India.

The Canadian born Bhullar, was the first athlete of South Indian origin and of Sikh faith, to compete in the UFC. Now he will spearhead ONE’s plans to expand the sport in India, in 2020.

“My goals when I got into the sport were to be a World Champion, which I can do with ONE under this contract, and [build] a lasting legacy by opening up the market in India and championing the sport in the country, which I know I can do.

“They signed a huge TV deal in India. They’ve said that they hope to expand into India in 2020 and they need a hero. Obviously, I want to take care of my family and provide for them, but I can do all of that over in ONE Championship. I’m excited.”

To achieve his goals, Bhullar realises how important it is to get off to a winning start in his ONE career. And after seeing both his fellow former UFC athletes, Eddie Alvarez and Sage Northcutt come unstuck in their ONE debuts, the 26 year old knows that he’s in for a tough bout in Manila.

“Every fight is important, and this one is no different. If you look at the guys who crossed over, Sage had a tough go. Eddie had a tough go. [Demetrious Johnson] had a tough fight as well, although he toughed it out and got a big win, he had his eye swollen shut.

“We expected a tough opponent. That was a given and I like a good challenge. That’s the part that excites me and motivates me. I don’t think Mauro’s going to bring anything to the table that [my training partners] aren’t, so I’m going to show the best of my ability and go out there and perform.”

Cerilli is a former Cage Warriors heavyweight champion and made his ONE debut last November at ONE: Conquest Of Champions, when he lost to the ONE heavyweight champion, Brandon Vera. The Italian got back to winning ways at ONE: Reign Of Valor in March, beating Alain Ngalani.

But if all goes to plan at ONE: Dawn Of Heroes, Bhullar plans on getting his hand raised and then call out the champion Vera, in his post fight interview.

“It’s exciting. I’m going to take care of this fight. I hope Brandon Vera is sitting ringside. I’m going to get a little excited on the microphone if he’s sitting there to help set up that fight. It would be exciting.

“Whether it’s in India, or maybe the US debut [event], that would be fantastic. Then I could take the World Title to India. Either way, the plan is to win the World Title, and then take it to India.”

ONE: Dawn Of Heroes goes down on August 2nd, at the Mall Of Asia Arena in Manila, Philippines.