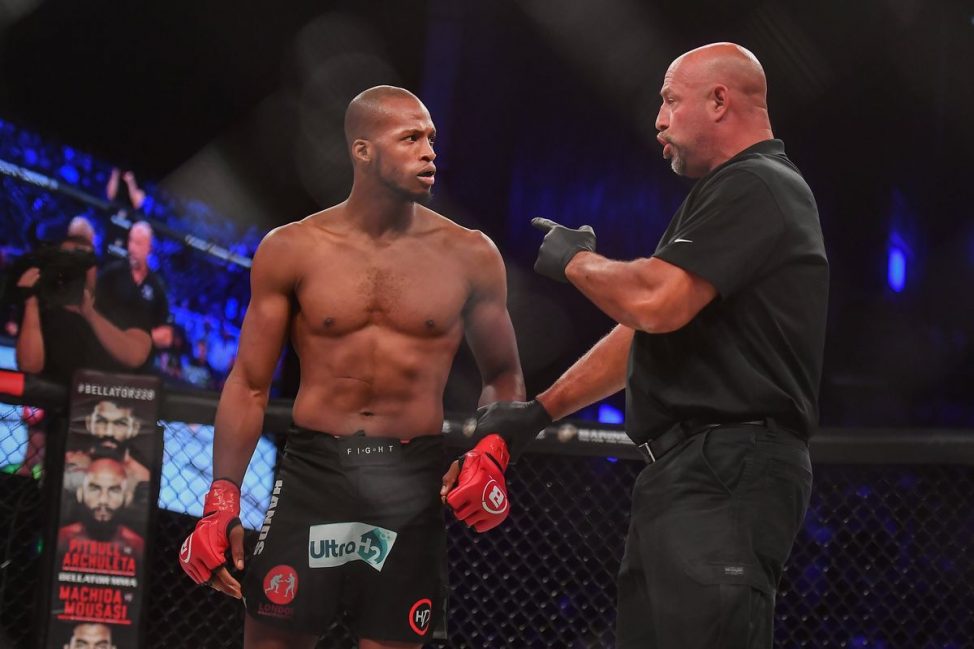 There were a few headline-worthy news from Bellator Dublin, but the most interesting one involved Michael Page, Kiely and Dan Miragliotta. After his fight, “MVP” alleged that the referee had called him a “piece of s**t”, and had something personal against him. Furthermore, it was reported that both Michael Page and his opponent, Kiely were being fined for unsportsmanlike conduct.

However, in a new update, neither fighter is going to be reprimanded, while Dan Miragliotta did not deny MVP’s allegations.

“I’m not going to say I didn’t say it, but I was wrong for saying it”, the referee told MMA Fighting. “I shouldn’t have gotten that angry, but I did. I screwed up.”

Furthermore, as a result, Dan also said he will never officiate another fight involving “Venum”.

“When Mr. Page performs again, Dan will not be in the cage”,Michael Mazzulli, president of Mohegan Tribe Department of Athletic Regulation told MMA Fighting. In fact, after reviewing the tape of the fight, Mazzulli also decided to reverse the $1,000 he previously issued to Kiely, and also decided to not penalize MVP.

“I think emotions got to everybody in that cage, including the referee, and he knows that he was wrong”, Mazzulli said.

“It’s not professional, and it’s not how we want to portray the sport, and Mr. Page should realize that”, Mazzulli said. “He’s been very professional with me over the years. I think it was just a culmination of what was occurring two months before the fight.”

Dan, for his part, said MVP told him to “f**k off”, which was the flash point for him losing his composure.

“I was pissed, bro”, Miragliotta said. “I’m 56 years old. I’m a grown man. I’m older than him. I show respect to everybody. When someone says f*ck off like that to me with disrespect, I lost it. I never should have said what I said. And I know I was wrong.

“Under my breath, I turned, and one of his coaches was right next to me, and I said, ‘What a f*cking piece of s*it.’

“I knew I was wrong, and especially with it being his coach right there, and he said, ‘What did you say?’ And I said, ‘Man, I apologize. I never should have said that.’”

Dan also said that MVP was bad-mouthing his opponent throughout the fight.

“It was a bad matchup, and he was dominating the kid”, Miragliotta said. “He didn’t have to do what he was doing. At one point, and you can watch the video and probably read his lips, he’s hitting him, then he stops and calls him a f*cking b*tch, he hits him again, ‘f*cking b*tch,’ did it a third time.

“He was taunting the kid. So I was like, I warned him, I’m calling time.”

Miragliotta could be hearing telling ‘Venom’, “You’re going to lose this fight with me if you keep playing games.” While Kiely apologized for flipping off MVP, Page, according to Dan Miragliotta did not respond. Dan said he walked up to MVP after the fight to calm things down.

“I go, ‘Bro, you are one of the most talented guys I’ve ever refereed”, he said. “I said, ‘Don’t ruin it with these antics. You beat the piss out of this guy, great job. You’re talented. You’re going places.’ He gave me a look like, ‘Screw you, f off.'”

Mazzulli explained that he brought MVP’s coaches and Dan together after the fight.

“I did what I did because of what he did, not because of his color or religion”, he said.

The referee also maintained that he will never referee another fight involving Page.

“I’ll never do his fights again, because I can never really look at him and not have that animosity toward him, because I’m not going to let somebody tell me to f*ck off, and there’s nothing I can do, and I’m an official”, Miragliotta said. “It’s not good for me or the sport.”