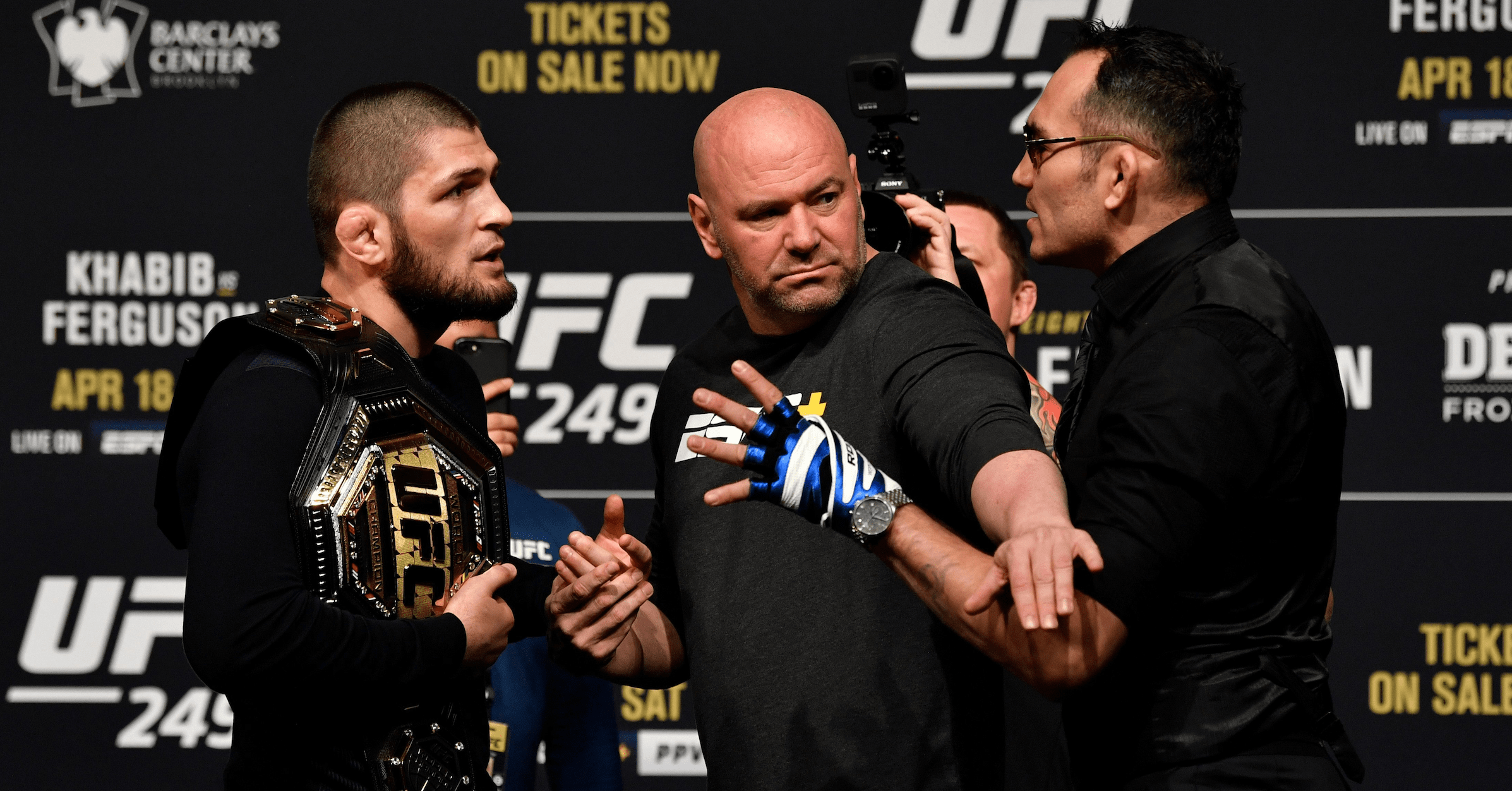 Despite the ongoing coronavirus pandemic which has brought the world to a standstill, Dana White and the UFC have been pushing on, doing everything they can to ensure that UFC 249 goes ahead as planned. In part because it is headlined by Khabib Nurmagomedov vs Tony Ferguson. The fight the world needs to see, having seen it already cancelled four times in the past.

Dana recently stated that he’s been thrown curve balls everyday, while trying to make the fight happen. And yesterday he was thrown the biggest curve ball to date. Khabib took to Instagram live to state that he was on lockdown in Russia and unable to fight at UFC 249.

Despite the king of all curve balls, Dana is powering on. Speaking on Frank Warren’s Heavyweight podcast (as transcribed by MMA Fighting), the UFC president opened up on the latest hurdle he’s had to deal with.

“The challenges are that every time I get something figured out, I wake up the next day and the world has completely changed again. Everything that I work hard on the day before, me and my crew, has now fallen apart. It literally just happened to us again today. I woke up today and Khabib Nurmagomedov is in Russia and they just shut down all travel in and out of Russia.

“I woke up this morning and the whole world f*cking changed again. So back to the drawing board and we’re figuring this out right now as we’re speaking right now, I have people working on this thing as we speak. Listen, I am absolutely f*cking relentless and I said that this fight is going to go on and it will.”

Dana has come under criticism from some media outlets for pushing on with the show, while the rest of the sporting world has completely shut down. But the UFC boss defended himself, stating that the UFC goes overboard with their medical precautions.

“We go overboard with everything all the time. Think about this, in the 20 year history that I’ve been involved and before me, there’s never been a death or serious injury. That’s crazy. Cheerleading can’t say that. We go completely overboard with health and safety even before the coronavirus. The health and safety part is nothing new to us. It’s now just trying to be able to manoeuvre as the world continues to freak out and lose their mind over this coronavirus stuff. All my fighters want to fight. My staff wants to work. Everybody who’s involved in what I’m doing is absolutely willing and able to do this.

“The thing is with my fighters, when they’re with me, they’re getting the best medical attention they could possibly get. Better if they were home alone by themselves or whatever their situation is. I’ve reached out to everybody, not just my employees that work for me, but my fighters, too — if them or a loved one becomes ill and needs me, I’m here. I will do everything in my power to help and take care of them. That’s a given always. This fight will go on.”

As well as defending himself again, Dana again hit out at the media and said that he will tell them the location of UFC 249, when they need to know and not before.

“A lot of these media guys are absolute and total f***ing scumbags. As soon as you let them know what you’re doing, all they’re trying to do is f*** up everything that you’ve worked.”

“So I literally told everyone of these guys to go f*** themselves and I’m not telling any of them what I’m doing, where I’m doing it but know this — the fight is happening on April 18th, some where on planet f***ing Earth and when you need to know, I’ll let you know.”

As news the Khabib that had practically ruled himself out of UFC 249 emerged, several big name fighters offered to step in and save the card. One of the first to throw his name in the hat was Jorge Masvidal.

Soon after this tweet, Ariel Helwani reported that the UFC was working on Masvidal vs Kamaru Usman, for the UFC welterweight title, to headline the card.

Masvidal’s response? He stated that he has accepted the fight but claimed Usman had turned it down. Again.

Although Masvidal accused Usman’s manager Ali Abdelaziz of posting the tweet. Abdelaziz has been known to tweet on his fighters’ behalf in the past.

If the UFC needs options, they have them. Colby Covington and Tyron Woodley both took to social media just one minute apart, to ask to fight each other on the card.

The offers to step in at UFC 249 didn’t stop there, Dustin Poirier has also offered to step in. Tweeting that he’ll happily face Ferguson, adding that he’s already approached the UFC.

Last night, ESPN reported that the UFC had approached Justin Gaethje to step in and fight Ferguson. ‘The Highlight’ however has always refused short term fights in the past, saying that he will fight anyone, but only with a full training camp. So the chances of him taking the fight on short notice with the current coronavirus pandemic situation as it is, are tiny to say the least.

There has also been speculation that Conor McGregor could step in. However, the Irishman has been campaigning to close all the airports in Ireland. So it is highly unlikely that he is prepared to leave his country right now.

Who do you want to see headline UFC 249? Or do you think it’s time to postpone the card?