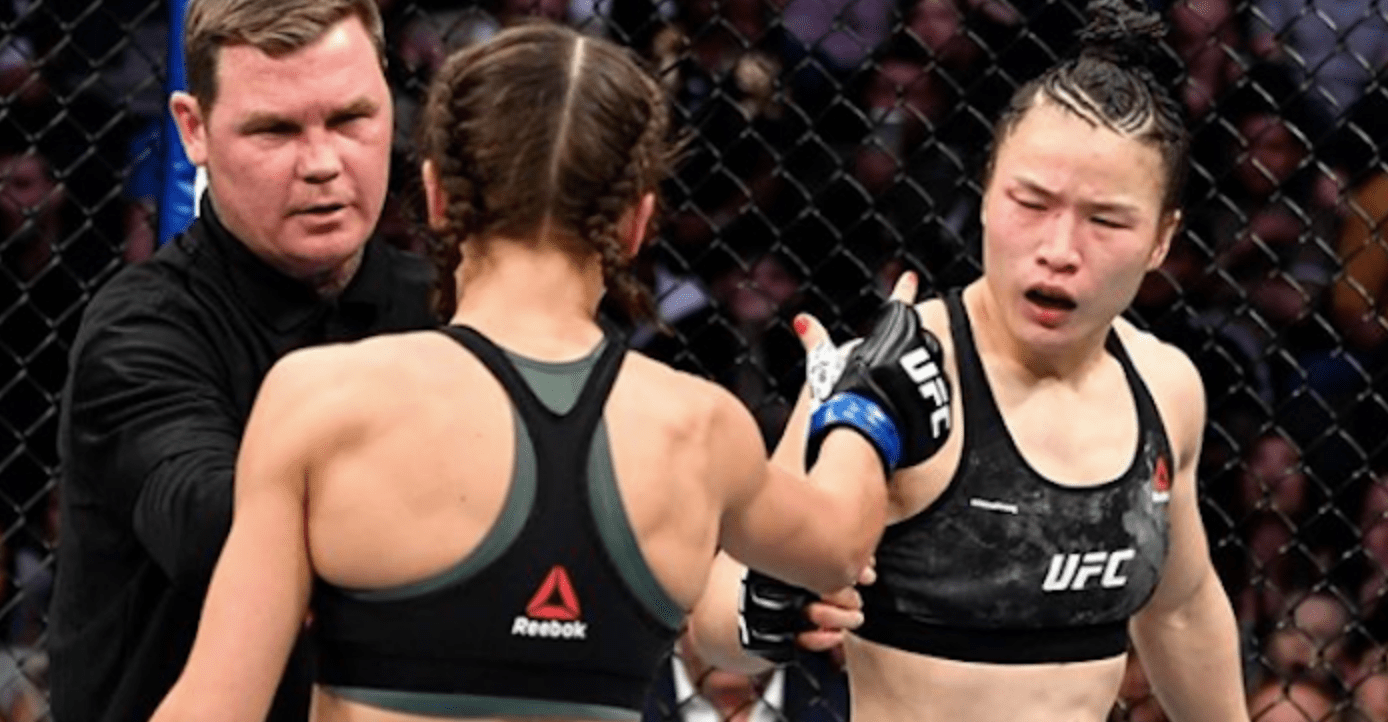 Three weeks after UFC strawweight champion Zhang Weili, defeated Joanna Jedrzejczyk in a very closely contested title fight at UFC 248, she still hasn’t been able to make it back to her native home country of China.

China’s first ever UFC champion unfortunately had to relocate her training camp twice ahead of UFC 248, in the midst of the coronavirus pandemic, which originated in China. Zhang had to leave Beijing to look for refuge from the virus in the nearby country of Thailand. The journey didn’t stop there. A week later, ‘Magnum’ and her team then left for Abu Dhabi, before they finally made it to Las Vegas.

Speaking to ESPN, Zhang opened up on extra long stay in the United States.

“The original plan was flying back to China right after the fight. UFC required us to stay for a few more days for media interviews, so we stayed and planned to go back afterwards, but the outbreak went serious here right after. We decided to stay, since the risk of getting infected in the airport and on the flight is very high. The situation in China is getting better every day, most of the infection cases are from outside of the country.”

With the growing crisis, the 29-year-old had to change her travel plans and rented a home in southwest Las Vegas for the time being, but has stayed active in her MMA training.

“We are waiting for the rush of people going to China to calm down. We don’t know when we will go home yet since the tickets are so difficult to book right now. I miss my family, friends and food in China.”

Zhang also reflected on her previous war against the former strawweight queen, Jedrzejczyk.

“I have not watched it yet, since I did not put on my best performance and showcase my best shape in training. I appreciate the support and recognition from all my fans, and I am glad they enjoyed the fight. Joanna and I both put on our toughness and will inside the Octagon to make the fight fascinating.

“People back in China are all very motivated and credit my hard work and show tons of respect to all athletes who compete for our country. Almost all mainstream media has interviewed me. I heard there were over 100 million views of the fight within 24 hours in China. So many fans jammed the Chinese pay-per-view website to watch it live, the server went down.”

Given how close and enthralling her UFC 248 co-main event with Joanna was, it’s no wonder that MMA fans would love to see a rematch. According to Weili however, the fans may have to wait a little while for Zhang vs Jedrzejczyk 2.

“I have no clue when my next fight would be yet, since everything is stuck by this COVID-19 pandemic. I would like to fight here in the U.S. again, since I have seen a massive number of Chinese and Asian people here motivated by my fight who will definitely cheer for me, and also the U.S. has the biggest MMA fan base. I don’t want the rematch yet. I would like to give opportunities to other fighters in line.”

The seemingly unstoppable Zhang Weili is on an amazing 21 fight win streak with her last 3 wins being over Tecia Torres, Jessica Andrade ad Joanna Jedrzejczyk. This makes us wonder, who can possibly beat China’s very own UFC Champion inside the Octagon?