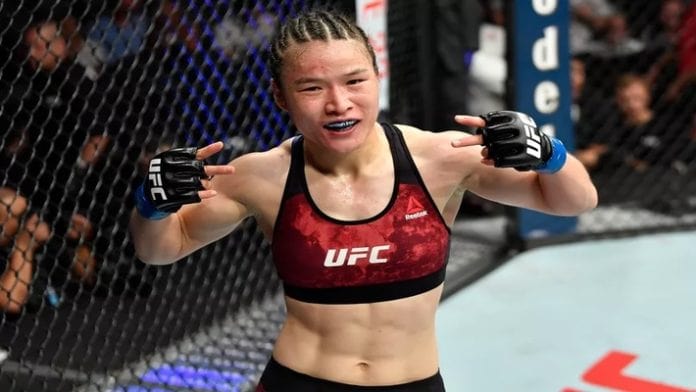 UFC women’s strawweight champion Zhang Weili has been crystal clear about who she wants to fight next: Rose Namajunas. The matchup certainly makes sense from a competitive perspective. Following ‘Magnum’s’ razor-close but much celebrated win over Joanna Jedrzejczyk, ‘Thug Rose’ remains the only top-ranked strawweight whose striking pedigree and footwork can conceivably pose problems for the champion.

Zhang explained in an ESPN interview her reasons for selecting Namajunas.

“I would fight anyone that the UFC offers to us,” Zhang declared. “But my preference is to fight Rose because I believe she is the highest-level and most-skilled martial artist outside of myself in the division. She would be a good challenge for me.”

But recent reports suggest the fight is not likely to happen. Though no signatures have been set on any dotted lines, it has been widely speculated that Namajunas and Jessica Andrade have agreed to a rematch, with Combate first breaking the story.

Fans will recall that Namajunas lost the strawweight title to Andrade in one of the scariest moments in the sport’s history. At UFC 237 in May of 2019, the Brazilian slammed ‘Thug Rose’ to the canvas in a violent knockout that thankfully looked much worse than it was.

Andrade went on to fight Zhang at UFC Shenzhen where it took ‘Magnum’ less than a minute to win the belt by TKO stoppage.

The rematch between Andrade and Namajunas was scheduled for UFC 249, but ‘Thug Rose’ pulled out of the bout due to familial struggles associated with the COVID-19 pandemic. This led UFC president Dana White to speculate on the mental state of the 27 year old American, when discussing her rumoured rematch with ESPN.

“Rose is set to fight Jessica Andrade, and the winner of that fight would probably fight Weili …”, speculated White. “We’ll see what happens.”

If we connect the dots across the division, then, it seems clear that Zhang will not get her preferred next opponent. This leads inevitably to speculation that a rematch with Joanna may be in the works, which would make Jedrzejczyk very happy. Of course, if the fight happens, it will have to take place on ‘Fight Island’ (or what some fans have jokingly referred to as the ‘UF-Sea’).

Zhang feels these conditions are far from ideal but would consider the offer.

“I feel different because no one will be there like in Vegas,” said ‘Magnum’. “No fans, no bright lights.

“It’s just different. I like it when a lot of people are watching, cheering. … It’s totally different. It’s not the same. But I will definitely consider it if they offer it to me.”

This development comes in addition to Zhang’s claim that she has desires to become a ‘champ champ’ and challenge Valentina Shevchenko for the 125 flyweight title.

In any case, it appears that Zhang will have to await Andrade’s rematch with Namajunas before testing herself against ‘Thug Rose.’

Who would you rather see Zhang Weili fight in her next title defence: Rose Namajunas, Joanna Jedrzejczyk or someone else?