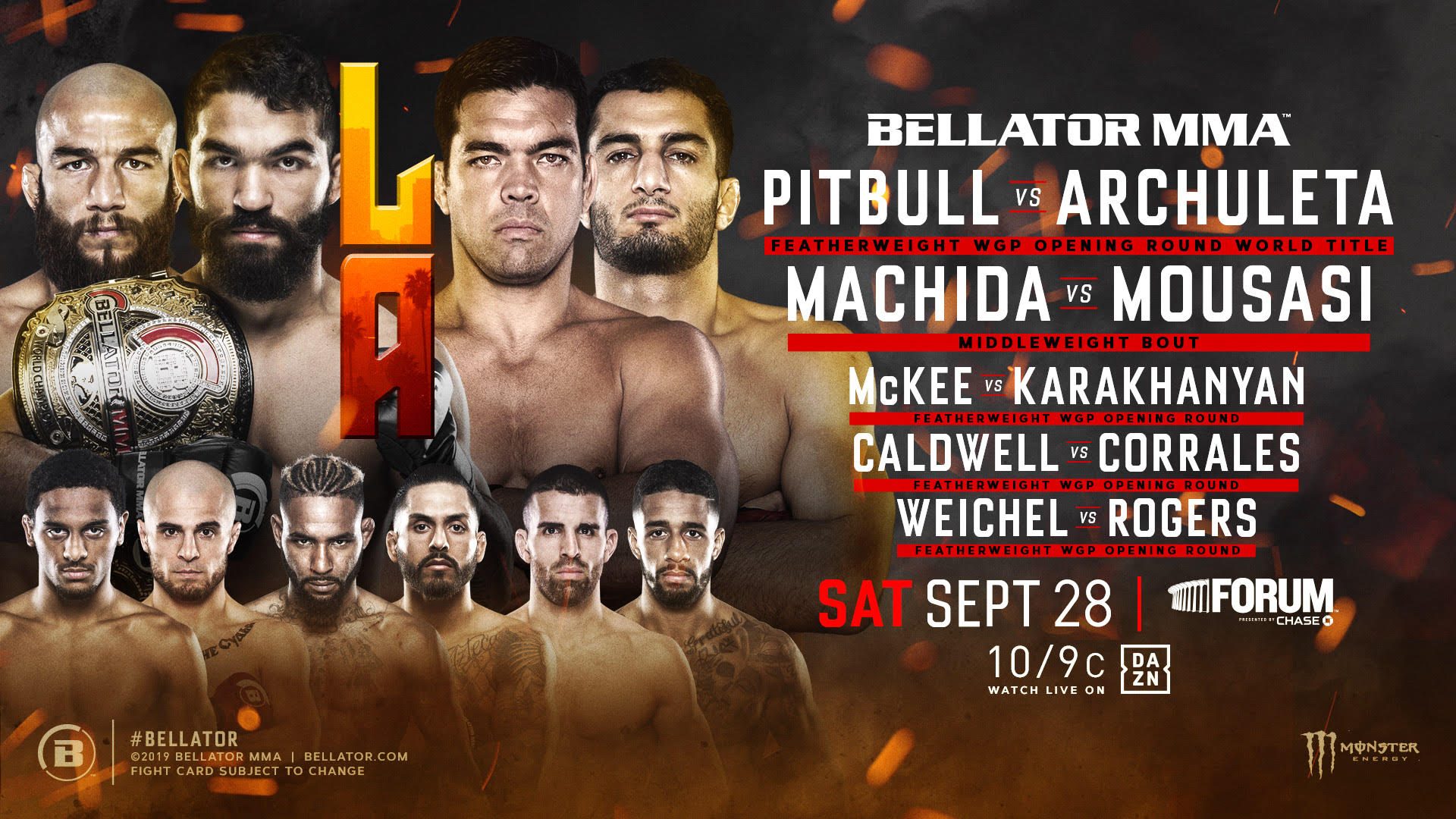 The opening round of the Bellator Featherweight World Grand Prix will conclude with Bellator’s two-division champion Patricio “Pitbull”(29-4) defending his 145-pound title against Juan Archuleta (23-1) at Bellator 228 on Saturday, September 28 at the “Fabulous” Forum in Inglewood, California.

Before the title is defended, the opening round will also see former Bellator bantamweight champion Darrion Caldwell (13-3) move up in weight to battle Henry Corrales (17-3), two of Bellator’s top European athletes Daniel Weichel (39-11) and Saul Rogers (13-2) square off and AJ McKee (14-0) looking to extend the longest winning streak in Bellator history against Georgi Karakhanyan (28-9-1, 1 NC).

Lastly on the main card, a battle between two of the sport’s most prolific middleweights will also take place, as former UFC world champion Lyoto Machida (26-8) looks to improve to 2-0 against Bellator’s former 185-pound champion, Gegard Mousasi (45-7-2) in a highly anticipated clash.

Bellator 228 will stream live exclusively on DAZN at 10 p.m. ET/7 p.m. PT, while preliminary action will stream on Bellator.com, DAZN and globally on the Bellator Mobile App beginning at 7:30 p.m. ET/4:30 p.m. PT.

Following the conclusion of the title bout between “Pitbull” and Archuleta, the advancing competitors will take center stage for the Bellator Featherweight World Grand Prix Selection Show to set the bracket for the rest of the tournament and determine their fate at becoming world champion and taking home one million dollars.

The fighters will begin by drawing a random number in the order in which they competed in their respective opening round bouts, with Emmanuel Sanchez set to pick first. This number will dictate the order in which they select their desired slot in the bracket, beginning with No. 1. Seeing the upcoming event dates and any previous picks made, and with the help of a coach or training partner that will be allowed onstage with the fighter to consult, a decision must be made…is the date of the next round of the utmost importance? Do you take on an “easier” opponent to try and advance to the next round? Or do you go toe-to-toe with a fierce rival right away in pursuit of a world title?

Prior to Bellator 228’s main card, multiple must-see preliminary bouts are set to go off, including Shawn Bunch (9-3) vs. Leandro Higo (18-5) at bantamweight, as well as the in-ring returns of both Brazilian jiu-jitsu ace AJ Agazarm (1-1) and Machida brother-training partner Weber Almeida (2-0), and the MMA debut of former WBC and IBF champ Ava Knight, as she trades in her boxing gloves for MMA gloves for the first time. Notably, fans will also see the return of Antonio McKee (29-6-2), father of AJ McKee, who competes for the first time since 2014 against William Sriyapai (14-8).