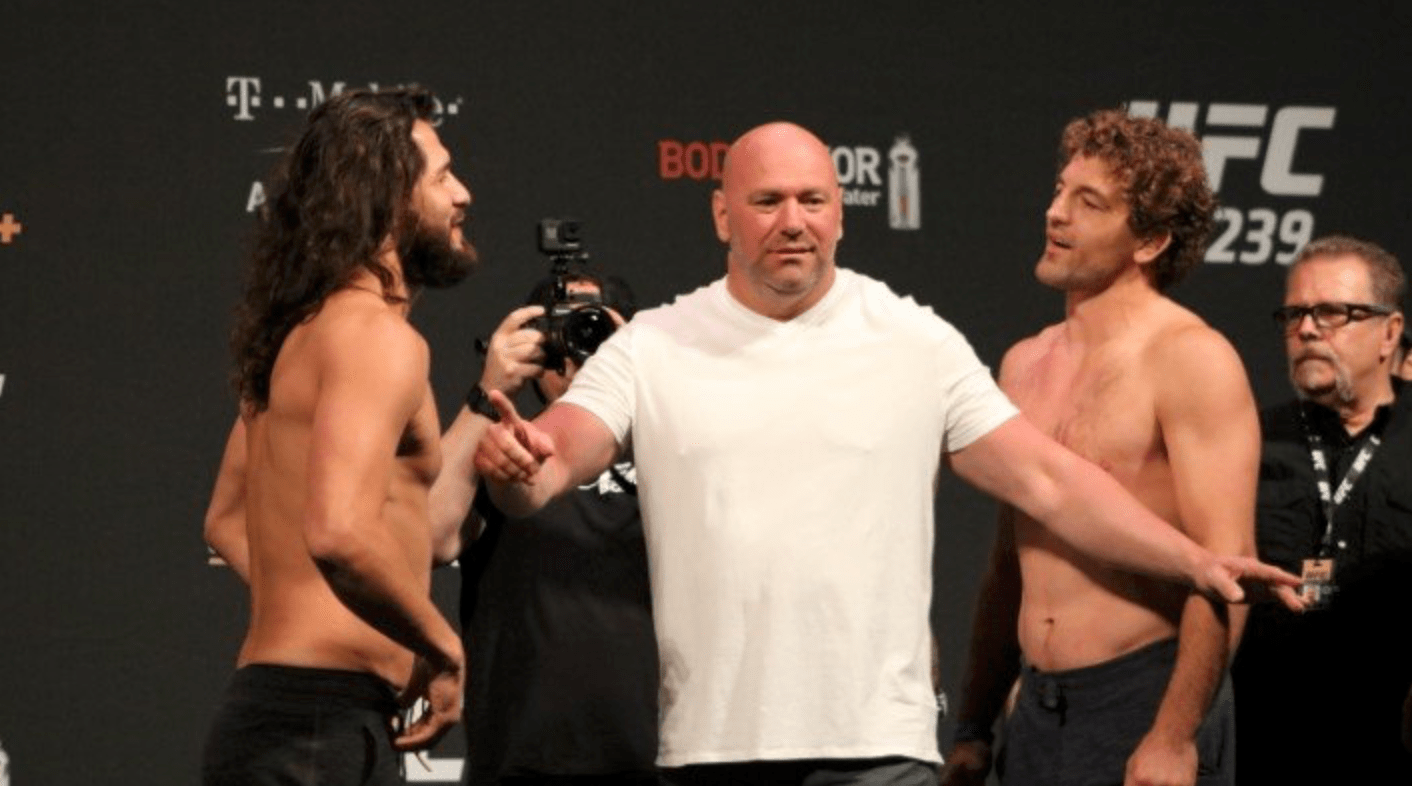 When you’re unbeaten, there’s always going to be a little extra pressure to keep on winning. If your name is Ben Askren and you’ve been antagonising most of your rivals for the last ten plus years, you’re always going to have more riding on each and every fight.

And fair play to Askren, after losing to Jorge Masvidal in spectacular fashion at UFC 239, ‘Funky’ was the first one to admit that if you live by the sword, you die by the sword. And even defended Masvidal for landing the extra punches, after he was already knocked out cold from the flying knee.

Speaking on The Ariel Helwani MMA Show, Askren said that he probably deserved for the fight to end the way that it did.

“I antagonised the shit out of him. That was on purpose. I was trying to first, get him to accept the fight. Second, then make him mad. Like those extra punches, it’s fine. It’s probably what should be expected in a scenario like that.

“I feel like I probably deserve it. I’ve been antagonising people for almost a decade now and it never came up on the end of the stick. Now I’m not reading everything they’re antagonizing me with. I’m just scrolling through it. I don’t want to dwell on that but fair enough, I always figured that when this point happened, I’d get lit up. I’m not paying attention to it but I’m sure I’m getting lit up.”

Since signing to the UFC at the end of 2018, the former ONE Championship and Bellator champion has become a real fan favourite. And despite the devastating loss in just five seconds to Masvidal this past weekend, the way the 34 year old has dealt with the loss, is sure to win over more fans.

“I got nothing to hide from. Things happen, losses happen. Saturday night was definitely not ideal for myself but I got nothing to complain about. There is a little part of my memory that is blank there. I remember being in the cage with him. I don’t really remember the flying knee and then when I can recall, I remember everything. So I was like, ‘Oh shit, I lost to Jorge Masvidal. This freaking sucks.’”

Going into the fight, Askren said that he was expecting Masvidal to do something crazy straight off the bat. But still didn’t envision a flying knee.

“I was ready for knees and I told Duke in the back that I thought he’d try something crazy right away. If you remember the Till fight, he ran across and kicked him in the balls in the first four seconds. I had an inkling he was going to try something right away,

“And I’ve always thought, ‘Who the hell gets caught with a flying knee? Can’t you see that coming? It’s coming from so far away?’ But when I watched the film, I don’t like Jorge at all but that was a damn good flying knee. He hit it fast and explosive. He got some serious airtime on it and connected on the right spot.

“One side of me says, ‘How did I get knocked out in five seconds?’ And I’ve been in this game for ten years and haven’t really been hit hard. I’ve never been rocked, never been dropped. So I was almost getting to the point where, I don’t want to say I was careless but I kind of thought I was almost invincible or had a tough skull. It was a hell of a hit but I was proved wrong on Saturday night.”

Askren also dismissed any suggestions that the flying knee was lucky.

“I hear people saying it was lucky. It’s not luck. Will it happen 100 out of 100 times? Definitely not. But landing a knee like that takes a lot of skill, I couldn’t do such a thing.

“But at the same time, I didn’t get my ass kicked for fifteen minutes and I didn’t get stuffed on thirteen takedowns and just get beat up for people to say, ‘He sucks.’ I got caught with a flying knee and got knocked out. There is not much I can do about it.”

Do you think Ben Askren will bounce back from this loss? And who would you like to see him fight next?