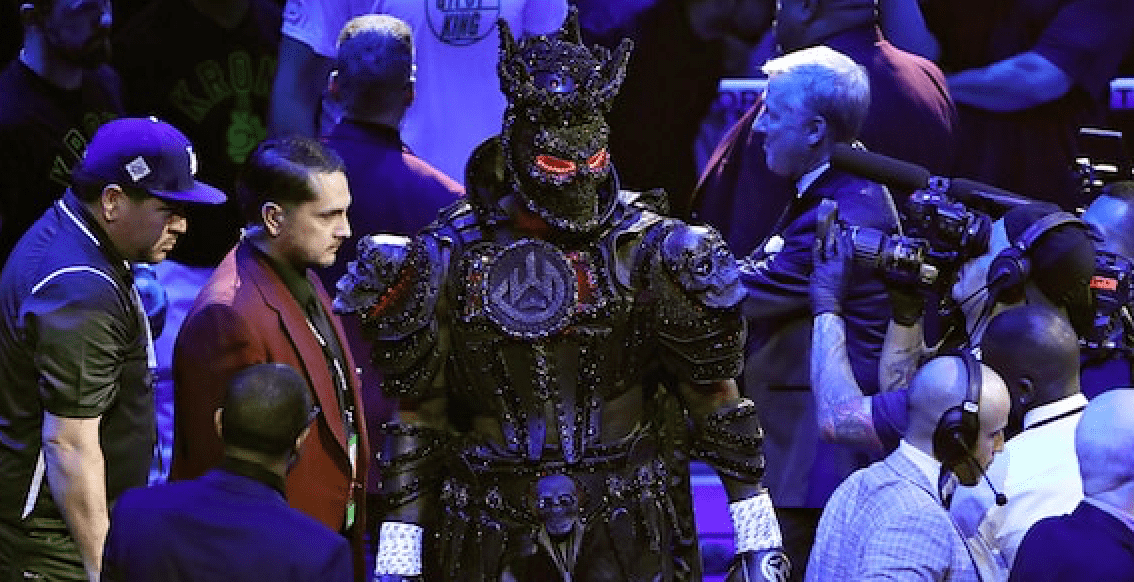 Saturday night didn’t go the way Deontay Wilder would have liked, in his highly anticipated rematch with Tyson Fury. After being knocked down several times in the fight, referee Kenny Bayless stopped the fight in the seventh round, after his cornerman Mark Breland threw in the towel.

After the fight, many fans suggested that Wilder didn’t look himself from the moment the fight started. Speaking to Yahoo! Sports’ Kevin Iole, ‘The Bronze Bomber’ said that his legs were already spent by the time he got to the ring, due to the weight of his costume.

“He didn’t hurt me at all, but the simple fact is … that my uniform was way too heavy for me. I didn’t have no legs from the beginning of the fight. In the third round, my legs were just shot all the way through. But I’m a warrior and people know that I’m a warrior. It could easily be told that I didn’t have legs or anything. A lot of people were telling me, ‘It looked like something was wrong with you.’ Something was, but when you’re in the ring, you have to bluff a lot of things. I tried my best to do so. I knew I didn’t have the legs because of my uniform.

“I was only able to put it on [for the first time] the night before, but I didn’t think it was going to be that heavy. It weighed 40, 40-some pounds with the helmet and all the batteries. I wanted my tribute to be great for Black History Month. I wanted it to be good and I guess I put that before anything.”

During the fight, there was a lot of concern that Wilder had ruptured his eardrum, which was thought to have had a significant impact on his equilibrium. However, Iole reported that the only injury the former champion suffered during the fight was a cut inside his ear.

While Wilder stated he was already compromised before the first bell even sounded, he went on to say that he wasn’t happy with Mark Breland for throwing in the towel in the seventh round.

“I am upset with Mark for the simple fact that we’ve talked about this many times and it’s not emotional. It is not an emotional thing, it’s a principal thing. We’ve talked about this situation many, many years before this even happened. I said as a warrior, as a champion, as a leader, as a ruler, I want to go out on my shield. If I’m talking about going in and killing a man, I respect the same way. I abide by the same principal of receiving.

“So I told my team to never, ever, no matter what it may look like, to never throw the towel in with me because I’m a special kind. I still had five rounds left. No matter what it looked like, I was still in the fight. I understand he was looking out for me and trying to do what he felt was right, but this is my life and my career and he has to accept my wishes.”


Speaking to The Athletic’s Lance Pugmire, Wilder said that he would re-evaluate whether or not he retains his assistant trainer Mark Breland, because he had told his team that “I’d rather die in the ring than have the towel thrown in. I’m a warrior.”

Pugmire also reported that Wilder will exercise the rematch clause in his contract.

While it was expected that Wilder would exercise his rematch clause, many fans are calling for Fury to fight Anthony Joshua now, in a historic unification bout. ‘AJ’ holds the WBA (Super), IBF, WBO, and IBO heavyweight titles. While ‘The Gypsy King’ now holds The Ring, WBC and lineal heavyweight titles.


Meanwhile, UFC heavyweight contender Francis Ngannou has told MMA Junkie that he wants to compete in several boxing contests, including against the man of the moment, Tyson Fury.

“(I’m interested in) competing in the boxing match in general, but Fury and I have some little story together because he was first calling me out in MMA and everything. Basically, the man stands, after his fight yesterday as the best heavyweight. No argument about that – he stands as the best heavyweight. For someone looking to box, you definitely have to go through him to prove that you’re the best.

Who would you like to see Tyson Fury fight next, Deontay Wilder, Anthony Joshua, Francis Ngannou or someone else?