Eddie Hearn Is Planning WBC Title Fight In His Garden 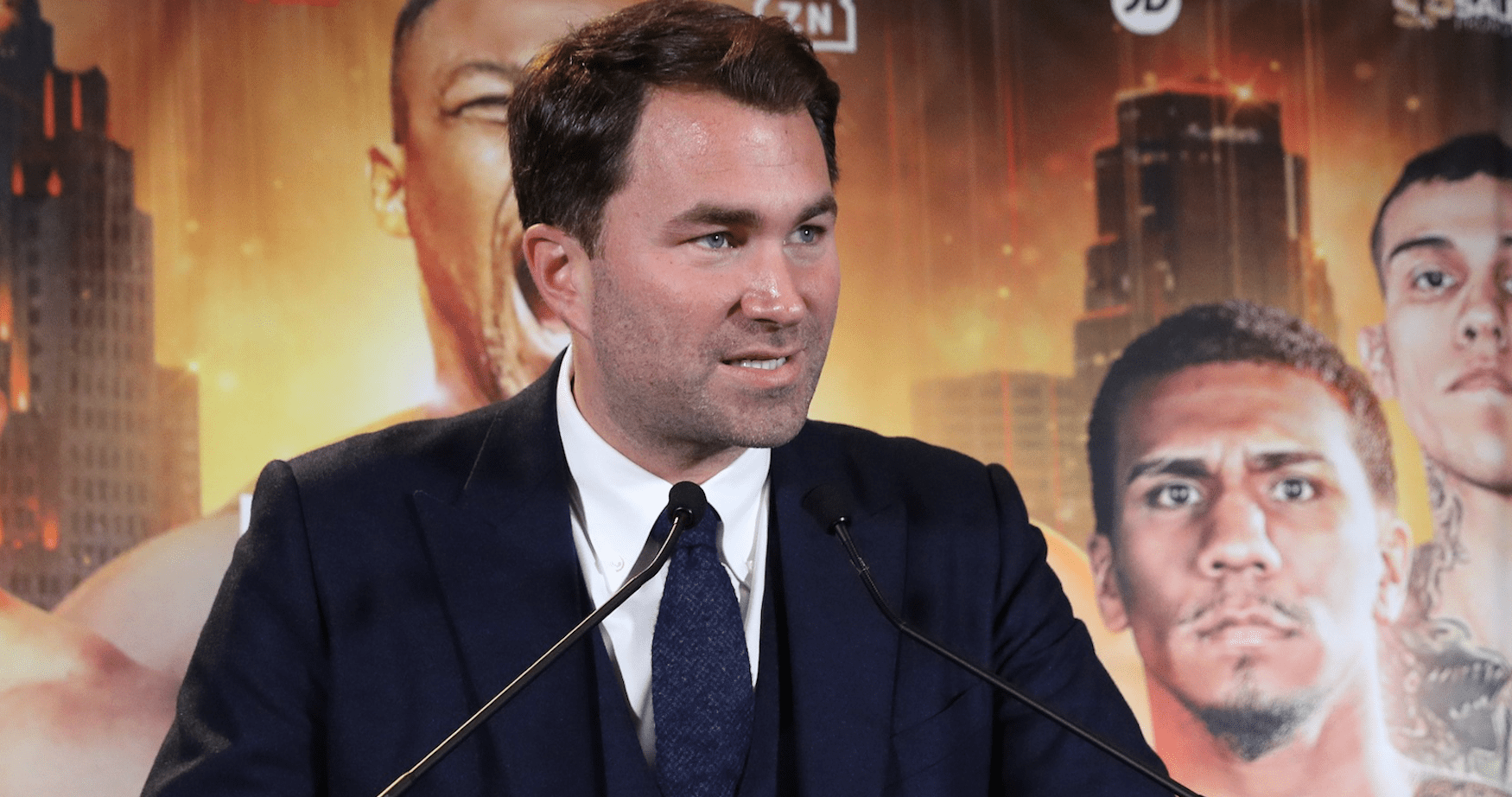 Eddie Hearn has announced that boxing will return this summer but our dreams of a sold out 02 Arena are still a distant dream.

The prolific sports promoter has decided that the best location to showcase his fighters during this bizarre time, will be his back garden. Hearn’s plans would see four consecutive Saturday night events taking place inside of the 15 acres of land that surround Matchroom Sport’s headquarters in Essex, England.

Potential matchups include Terri Harper vs Natasha Jonas, and Dillian Whyte vs Alexander Povetkin for the WBC interim heavyweight title. No fans will be allowed to attend the event although 80-90 lucky employees will be on-site during the proposed events.

In an interview for The Mail, Hearn discussed his aspiration’s in detail.

“Just imagine it. It is summer, the house is all lit up, you can see Canary Wharf in the distance and fireworks are going off. Then over the hill walk Dillian Whyte and Alexander Povetkin for a massive tear up on my lawn.

“World championship boxing in my garden? Oh, go on then.”

According to Hearn, the proposal is now close to being approved. However, hosting live sports events in the current global climate comes at a great cost, as confirmed by Dana White following UFC 249.

“We cannot just bring boxing back with a dark studio. We have built our product on the razzmatazz, the sexiness and the drama. It has all been about building that moment for a fight, so we cannot afford to just bring people out like a gameshow.

“We want to create a gladiatorial environment that will not only ensure compelling viewing but will also ensure fighters can perform at the highest level.”

Matchroom Fight Camp has become the official umbrella title for the four nights of fighting. Negotiations are now in full flow with the British Board of Boxing, the WBC and local British Councils, regarding the logistics of the proposed shows.

The series of events are predicted to cost Matchroom somewhere in the region on £1 million and Eddie assures us that no expense will be spared when it comes to fighter safety.

“We are building changing rooms for the fighters, setting up a space for a ring walk, and figuring out how we can do everything you need for this kind of production with as few people as possible.’ Testing and isolation are the major challenges.

“We are in talks with a nearby hotel about taking control of it for each of the weeks,’ Hearn said. ‘The way it will work is everyone involved – the fighters, their teams, the broadcasters – will go into the hotel on Tuesday and the fighter and their team will go to a testing facility at the hotel. You will go in, get tested, be handed a room key and go straight to your room, where you will wait until you get the result of the test.

“The tests are comprehensive and they take 24 hours, so the fighter will stay in their room until they get a call from our doctors, likely on the Wednesday, with their results. If they are positive, they will leave the hotel immediately. If they are not, they are able to leave their room and take part in the obligations of fight week, all with social distancing.

‘”Everyone involved in the show, from top to bottom, will have to go through that process before they are allowed on to our premises.

“In terms of fight-week promotion, that is the other side of the challenge. How do you do the media around it? Obviously we cannot have dozens of journalists turning up and sitting shoulder to shoulder for a presser and a weigh-in like normal.

“So we need to decide how it will go – it is likely that Zoom interviews and social media live streams with the fighters and journalists will be the new norm, and pumping out clips of the fighters around the clock, building up to the weigh-ins on the grounds on Fridays and the fights on Saturdays.”

Of the 80-90 people in attendance, at least half will be Matchroom employees and the remainder will be formed by a mixture of cornermen, cutmen and officials. Precautions are set to be strict and include wiping down each fighter between rounds, disinfecting them at the conclusion of each bout and the wearing of PPE by all of the staff ringside.

All fixtures and fittings will also be meticulously sanitised prior to and in between fights. The plan appears to be in motion although Hearn admits that it’s the WBC and their views on a title fight that will be his biggest hurdle.

“We are in discussions with the Board at the moment. All of this has been done in dialogue with them. Obviously we want to start with a world title contest.

“We would need the WBC, say, to be comfortable with Board of Control officials, some of whom are WBC officials anyway. The challenge with all of this is keeping the numbers down.’ In the event that the final hurdles are cleared, and the shows go ahead as planned, it will put boxing among the first sports to bounce back from the pandemic.”

Hearn’s interview marks the first time that plans for a professional boxing bout have been fully disclosed since the crisis began. However, the accomplished promoter made it clear that his team had been working on this plan since day one.

“The idea has been going around our team since this all started. We want to make the best of the bad situation and we have had to get creative.

“I just feel like everyone seems a lot more comfortable in an outside environment at the moment. To do a contact sport in a studio or a confined gym with everyone sweating about, isn’t great. This feels cleaner and safer and it will look sensational, with the drones flying over the premises.

“It will give the fighters that big event feel. The numbers will be limited but the drama will not – there will be pyrotechnics and fireworks with a big mansion in the background, looking out over London.

“It won’t be great for the grass but hopefully it will be very good for boxing.”

Do you think that Eddie Hearn and Matchroom can follow in the footsteps of the UFC by successfully resuming live sports events?