Eddie Hearn Wants To Emulate The UFC’s Model In Boxing 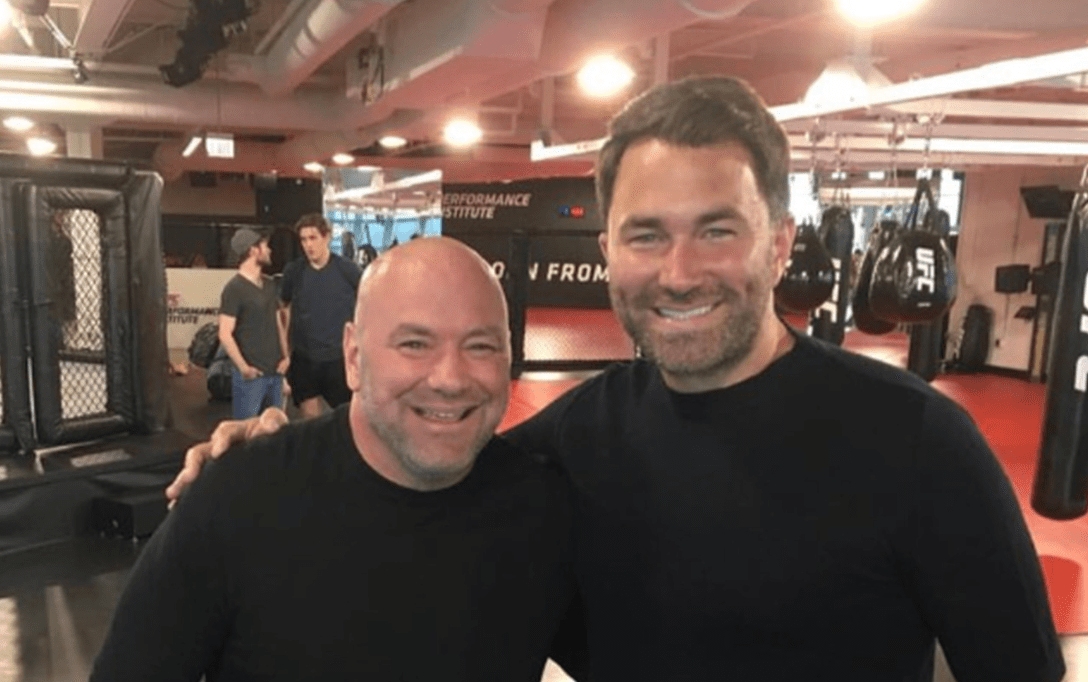 Eddie Hearn has often voiced his admiration for Dana White and the UFC. Unlike other promoters, the English businessman does not engage in public arguments with any mixed martial arts personalities. The Matchroom Sport managing director certainly recognises the rapid growth rate MMA is experiencing at the moment.

Given boxing’s history of politics interfering with the fights, many fans have turned to MMA for better caliber entertainment where padded records and cherry-picking is often non-existent. Nonetheless, boxing still has a global fanbase and the potential to generate exciting matchups; Hearn believes he could be the one to bring the sport once again into the spotlight.

While the UFC consistently puts on fan-friendly events week in week out, boxing has struggled to keep up with the content quality that is expected from the sport. Hearn believes that one of the main issues lies in the rocky relationship between boxing promoters. It is no secret that promoters constantly look to protect their fighters, thus, the most competitive fights are not always scheduled.

Hearn spoke to The Athletic (as transcribed by TheMacLife) about his intentions to take over boxing in order to put on competitive shows, and how he draws inspiration from the UFC.

“I think it’s a must to take boxing to the levels I want to see it. The sport is fragmented and fans get impatient waiting for certain fights,” Hearn said. “There’s that reputation boxing has, particularly among casual fans, that we never get the fights we want to see in boxing. UFC has taken over that mantle. Look at what they’ve come back with – they’ve delivered intriguing matchups, 50-50s, deep cards. And they’ve done it with style. I say it to Dana White: ‘We copy a lot of what you do because as far as I’m concerned, you are the trendsetter for combat sports.’

“The only aim I have is to develop an organisation like that for boxing because that’s the ultimate. We have to try to have a universal product that isn’t fragmented and the only way you can do that is to create an organisation, either by generating enough power and success that it naturally filters through and takes over the sport or you do it via a business that acquires other promotional outfits and creates that entity. I can do it both ways. The fun element of that is to do it myself and to do it naturally. But that takes time. The other version can happen in six months.

“The UFC is a business that was bought for $4 billion – there is no reason why you cannot create the same value business in boxing. It’s a bigger sport. It has more history and a much deeper fanbase globally. Bob Arum has made no secret of the fact that he would sell the [Top Rank] if the right buyer was there.

“There are plenty of people out there – big, big players – who are saying, ‘Eddie, can we do this?’ And it would be incredible, but part of me wants to say, ‘I think I’m going to do it anyway.’ It’s about how quickly can you do it? At the moment it’s so hard to get on in the business because no one wants you to get on. I would probably miss it if it was just us – part of the fun is Lou DiBella, Al Haymon, Arum – and all the back and forth. But it’s also incredibly frustrating and I think what the UFC have done just proves that it works.”

It is refreshing to hear a promoter prioritise the value of competitive fights rather than only focusing on protecting the big-name athletes. A restructuring of the sport’s governing bodies and promoting organisations has been a common demand among fans for a long time.

With Hearn at the forefront of one of boxing’s most prominent promotions, fans of ‘the noble art’ can hope for the sport’s return to a time where the best fought the best. Only time will tell if boxing regains the levels of fame and popular approval it had in prior times.

Do you think Eddie Hearn will bring boxing’s competitiveness back?