Honorio Banario Wants To Win In Tokyo For His Family, Team And Country 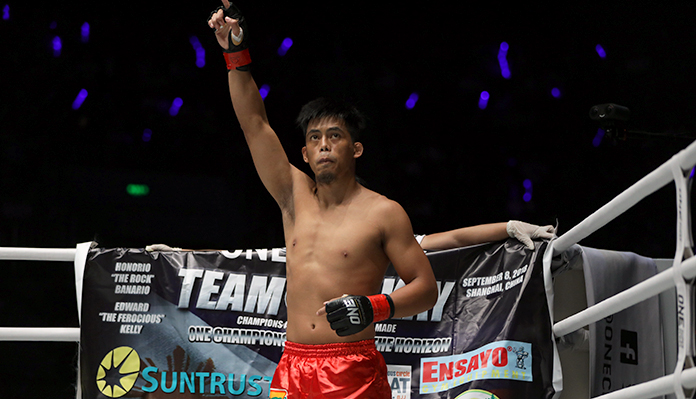 Former ONE Featherweight World Champion Honorio “The Rock” Banario is preparing to get himself back in the winners’ circle on October 13th when he faces Japanese legend Shinya “Tobikan Judan” Aoki at the iconic Ry?goku Kokugikan in Japan.

Banario is determined to snap his recent two-bout skid at ONE: CENTURY, after being knocked out by Lowen Tynanes in January and failing to outscore Dae Sung Park in August.

“It is not how I wanted to start my 2019,” Banario said about the two back-to-back losses.

“I am doing my best to prepare for my matches, but I fell short. Coach Mark (Sangiao) told me to learn from the experience and do better next time.”

“I am a good athlete, and I know that I am better than this, so I’m maximising the time I have at the gym. Winning this match is my priority.”

Team Lakay was able to capture a historic four world titles last year but lost them all in the first quarter of 2019. Joshua Pacio was able to reclaim his ONE Strawweight World Title in April, but the team as a whole had struggled. Team Lakay athletes already competed in 14 matches this year, winning only four of them. The Baguio City-based team hopes to redeem themselves in every match moving through to the second half of the year.

“I do feel the pressure coming into this match,” Banario said.

“I must win this match. I have lost the first two matches of the year, and I want to redeem myself and motivate the team as well. We have not been doing well lately, but we are working hard to change that.”

“The Rock” holds Aoki in the highest regard and views the Japanese athlete as the legend that he is. Aoki holds 27 submission victories out of 43 wins, an outstanding feat that only serves to prove just how dangerous Aoki is on the ground. Banario, who has been working on both his ground game and striking, believes he will come out on top, but that he will have to fight tooth and nail to make it happen.

“My upcoming match with Shinya will be very challenging. He is a legend in my eyes with submission skills that can take me out at any point in the game. It will be tough but not impossible,” said Banario.

Banario also has the added pressure of knowing that Aoki will be competing in front of his hometown crowd in Tokyo. But with his family and friends supporting him at every juncture, Banario remains motivated and confident of victory heading into the match.

“I want this win for myself, my family, my team, and the Philippines. My wife and son are currently the biggest sources of my motivation, and that means a lot. There will also be a huge crowd rooting for him, the odds are against me, but I will prevail.”