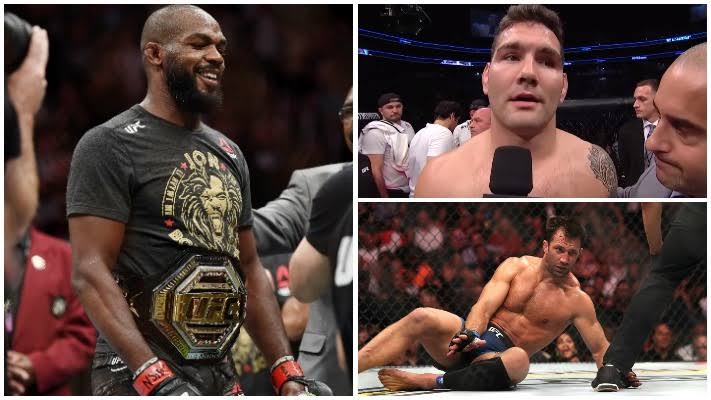 Before making their moves to light heavyweight, Luke Rockhold and Chris Weidman proclaimed that Jon Jones was in fact wasn’t that tough. They even went one step ahead, claiming they could dethrone the current UFC Light Heavyweight Champion, and hand him his first defeat.

And if we know one thing about Jon Jones, it is that he doesn’t forget.

Rockhold was the first to make the jump, facing Jan Blachowicz at UFC 239 back in July. The former middleweight champion soon found out that the power the light heavyweights pack is significantly more than what he experienced at middleweight. This resulted in Rockhold suffering a KO loss in the second round.

Since then, Luke has admitted that he might never fight again, and that he isn’t interested in a fight at this point.

Chris Weidman moved to 205 lbs after suffering four defeats in his last five outings at middleweight. However, the “All American” too couldn’t make an instant impact, getting pummeled by Dominick Reyes at UFC Boston, losing the fight inside two minutes of the first round.

And after their losses, it was Jon Jones who had the last laugh. Jones took to social media, and advised those gunning for him to get past the light heavyweight contenders first.

Before you guys come to my weight class and start talking shit, make sure you can get past a few of my contenders first ?? #welcome

“Before you guys come to my weight class and start talking sh*t, make sure you can get past a few of my contenders first”, Jon wrote on his IG account.

Weidman had earlier expressed his opinion that he could ‘skip the line‘ and face Jon, by beating Reyes at UFC Boston. However, that didn’t happen, and Reyes now finds himself in contention for a title shot.