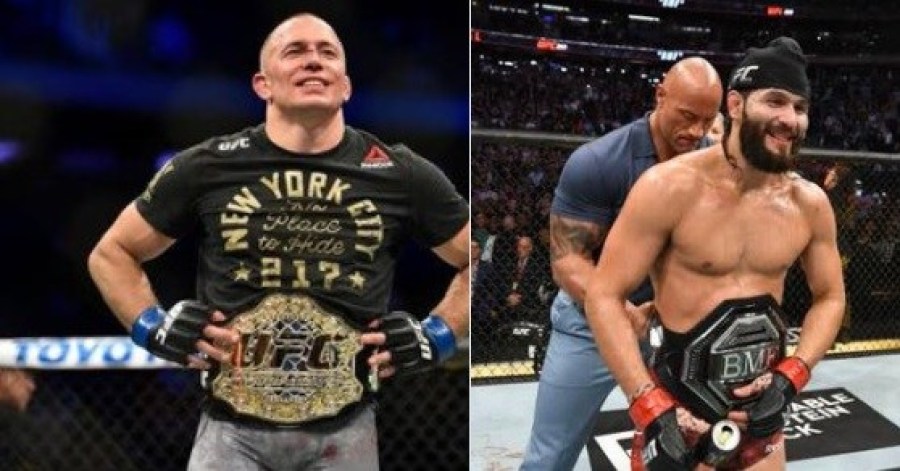 Conor McGregor, Floyd Mayweather, Canelo Alvarez. You can now add GSP to the list of fighters on Jorge Masvidal’s 2020 wish list. After an unbelievable 2019 inside the UFC Octagon, which saw ‘Gamebred’ win five awards on Ariel Helwani’s 2019 Nose Awards for top MMA Performances earlier this week, the 35 year old is demanding big fights this year.

“Well, they’ve said this about me, that I resurrect fighters and then I retire them again. So, I wouldn’t mind if GSP jumped on that campaign. In all honestly, as a competitor, I want to f***ing break his face. I want to go out there and give him everything I got. But I respect the time what he’s done.

“He took I don’t know how many years off, came back, beat Bisping for the legitimate middleweight title. Dude’s a stud. He’s a f***ing animal, bro. I would put everything into my being, into my soul, to end this individual, because he’s that good.”

While he may want to ‘break his face’, Masvidal said he has the utmost respect for the former UFC welterweight and middleweight champion.

“He’s the type of fighter, this s*** would require a nice training camp, isolation away from the world and just focus on the task, just day in and day out, cause he’s a hell of competitor, and I’m not taking a back seat to nobody in this division. So, I would love it.”

While the welterweight division has consistently been one of the most stacked divisions in the UFC, Masvidal insists that GSP is a league above the rest.

“You can’t compare Usman to GSP or nothing. Even if he’d be a bad style for GSP or not—which I don’t think he is—you couldn’t compare them. And then after GSP because of the sheer volume and stuff, I definitely throw my boy [Tyron] Woodley in there, Robbie Lawler as well. I mean, welterweight has just had some psychopaths in that weight class that are just mean individuals, that are athletic as hell.

“I mean, Robbie was just sheer violence when he had that title. Same thing with Woodley, man. With Woodley, all it takes is one shot and the fight is over. And he can wrestle his ass off too. So, there’s just some great studs, man. I think I got in the ‘who guy’—s***, I think I got the easy draw, man. I used to f*** with my boy T-Wood and Robbie man. I think my work’s cut for me obviously, I don’t take nobody lightly that has two hands.”

GSP has fought once in the last the last six years. After walking away from the sport in 2013, the 38 year old returned two years ago and stopped Michael Bisping, to win the UFC middleweight title. However, after the UFC refused to entertain the idea of him fighting Khabib Nurmagamedov, St-Pierre officially retired eleven months ago. He has stated since that he would return for the right fight.

Would a fight between Jorge Masvidal and GSP interest you?